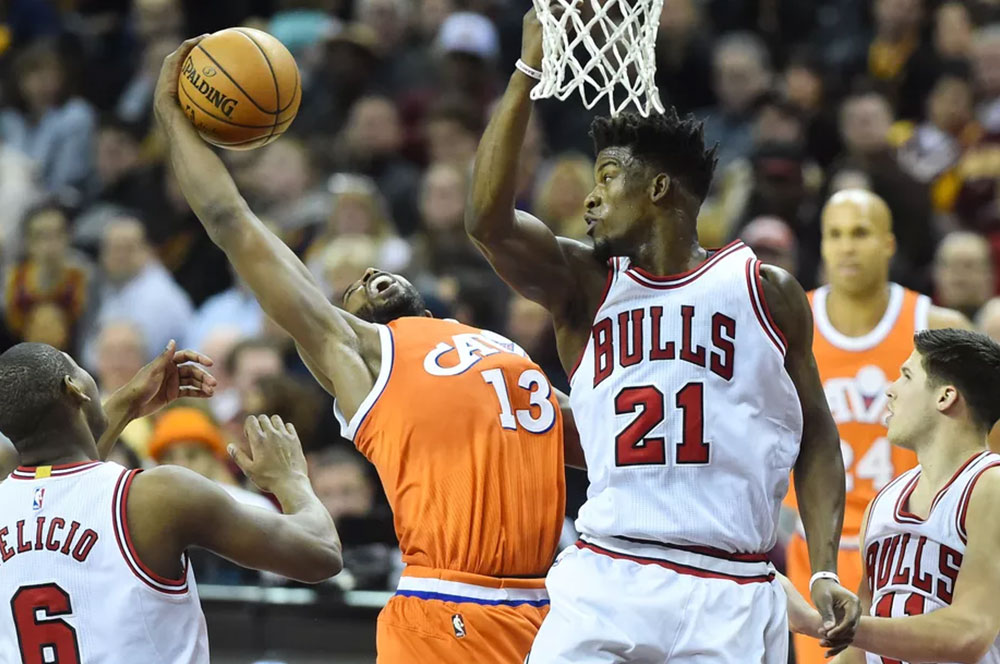 Jimmy Butler scored 14 in the 4th quarter and led the Bulls to another win over LeBron in the regular season.

Jimmy Butler struggled mightily in this game but upped his game in the 4th quarter. Luckily for him, his teammates picked up him before then, as the Chicago Bulls won another regular season game against LeBron James and the Cleveland Cavaliers 106-94. Though James played after being questionable with the flu, Kevin Love, Kyrie Irving, and JR Smith were all out for the Cavs.

Chicago was ice cold to start off the game. Halfway through the quarter, the Bulls only had four points and it looked like it would be one of those nights, especially considering that Jimmy Butler didn’t make a single basket in that quarter. Chicago as a team only scored 16 points and shot 29% from the field, where MCW couldn’t even hit the rim on his two three-point attempts. Cleveland took advantage of this, jumping out on a 15-2 run, with Jordan McRae scoring the first five points for the Cavs. But despite Cleveland playing so well and the Bulls so poorly, it was only a 23-16 lead for the defending champs at the end of the quarter.

The second quarter was much better. Hoiberg rolled out a line of Grant-Wade-McDermott-Mirotic-Felicio, that lineup turned out to be a spark plug for the Bulls. Behind Wade and the young guys, Chicago was able to go on a 13-0 run, which was capped off by a D-Wade three to take the lead just a few minutes into the quarter. The bench was able to carry the Bulls back into the game with both Doug McDermott and Nikola Mirotic scoring 15 and 11 points in the half respectively. Both shot a combined seven 3-point attempts, which was a good sign for the offense. Mirotic wasn’t only shooting from deep, he was also posting up James Jones and using his size to overpower his way to the basket. Taj Gibson was the only Chicago starter with double digit scoring in the half.

The big run by the bench was huge in terms of giving Butler some extra needed rest and allowing him to get back in rhythm offensively. But not even some extra minutes on the bench could help Butler offensively in the first half. With Cleveland packing the paint, Butler was forced to take more jump shots than he usually does. He scored his only basket in the half on a 3-pointer with 2:11. But thankfully for the Bulls, his teammates were able to pick him up and give Chicago a 52-46 heading into the locker room.

Chicago opened the second half on the opposite end of how they began first one, starting out hitting their shots. Wade continued Chicago’s trend of hot shoot from 3, hitting both of his attempts in the third quarter. He also took a shot to the jaw from DeAndre Liggins but turned out to be ok.

MCW also responded with a strong quarter, especially offensively which included him dunking all over McRae.

Like Mirotic, Carter-Williams found his offense from all over the floor. He scored in transition, off a nice cut to the rim, and even scored on a pull-up jump shot off a pick and roll. Chicago led by double digits for much of the quarter, which was super impressive considering Butler was still ineffective offensively. Cleveland suffered a big blow when LeBron went up to grab a rebound and landed on the foot of MCW, turning his ankle. But even with LeBron out, the Cavs battled back at the end of the quarter, much thanks to McRae. Hubie Brown said on the ESPN broadcast that Chicago couldn’t fall asleep at the end of the 3rd but they did as Cleveland were able to shed the lead to 83-74 at the end of the quarter. It was the second straight quarter where Chicago scored 30+ points but they had to finish with a strong 4th quarter.

[Also fun note in the 3rd quarter: Nikola Mirotic blocked LeBron James on a layup attempt which is something you don’t see every day. Or ever, in fact. ]

A bizarre moment at the start of the 4th was when McDermott was given a technical foul for an elbow. Now that would have been totally fine if not for the fact that the elbow was not immediately called and that McDermott drew a shooting foul moments after. It was an odd moment and it sort of took Chicago out of the flow of things. Before they knew it, Iman Shumpert was hitting a layup and cut the lead to four with 9:43 left in the quarter. It was a 17-3 run to cut Chicago’s lead to two while LeBron James was still on the bench. Then the King returned and it was game on.

The Bulls continued their usual 4th quarter recipe of feeding the ball to Butler, though he had struggled to this point. Butler started to find his groove by taking some pick and roll screens and making jumpers. He scored eight start points and drew an offensive foul call on LeBron to help Chicago push their lead to 94-88. It was a full on Butler takeover offensively: it wasn’t just Butler shooting the ball, it was initiating ball movement and not forcing himself to take bad shots. Best example of this was a possession where he dished it off to MCW, who passed it to Taj Gibson and found him for the layup. He also got an “assist” from MCW when the guard bricked a three of the glass so bad that it ricocheted right back to Butler who hit the jumper near the key. With 44 seconds left and a 10-point lead, the Bulls were one basket away from the dagger. They got it when Butler found Mirotic with the shot clock winding down.

Despite his poor play the first three quarters, Jimmy Butler led Chicago in scoring with 20 points including 14 in the final quarter. Chicago’s next game is against the Raptors in the United Center.