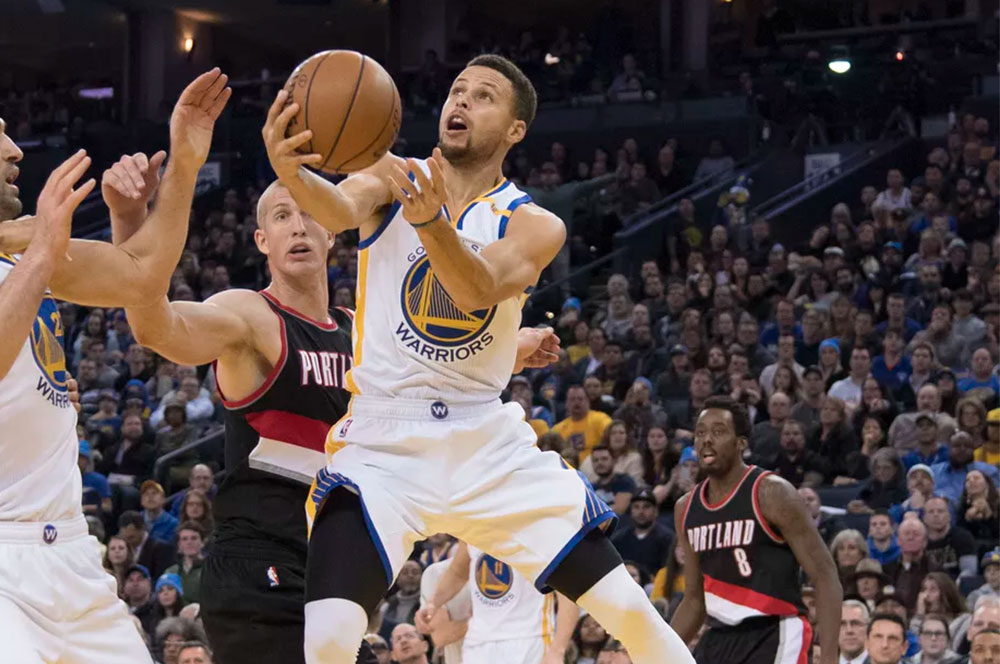 Despite the team’s turnovers, Curry’s aggressiveness pays off

Ahh, the Golden State Warriors. On paper this goes down as yet another solid victory over a potential playoff opponent, but in between the opening and closing whistle, we saw a lot of good, bad, and ugly from the Warriors.

It’s honestly challenging to pick which story line to cover here. Kevin Durant probably gets the Warrior Wonder, but also Steph Curry was more aggressive, Draymond Green played through foul trouble and came up huge defensively, Zaza Pachulia and Shaun Livingston played great, and we saw more of the Curry Durant pick and roll that folks have been recently buzzing about.

Curry was aggressive; he’s getting more screens or possibly just more willing to shoot. It’s hard to say, but likely a combination of both. For example, I definitely know I saw Steph slip a screen with Durant more than once. Probably the first time all season that it happened so frequently.

The Blazers exploded for 71 in first half, the most scored on the Warriors this season. Mostly because CJ McCollum went nuts with 26 points in the first half. In typical Warriors fashion, lack of concentration and moments of slippage defensively plagued the Warriors in the second quarter, turning their eight point lead at the end of the 1st quarter into a two point deficit headed into the half.

I hate to say it, but Steph Curry just couldn’t keep up with McCollum. A big part of the adjustment the Warriors did at the half was moving Klay Thompson over to McCollum. It worked, but may be indicative of a more fundamental structural problem with the Warriors defense that they’ll just have to address as needed (cough Cavs cough).

Turnovers seemed to rear their ugly head and bite the Warriors in this game, and glaringly so in the 2nd quarter. Free throws and three pointers were dead even at the half, but Portland was murdering the Warriors on points off turnovers.

I mentioned in the preview thread that I was more worried about this game without Lillard and sure enough, the Warriors coughed the ball up too much playing sloppy. And an efficient Portland offense made them pay in the 2nd quarter.

But the Warriors giveth, and they taketh away. The 3rd quarter was a different story for McCollum and the Blazers. The poor guy only managed three shots on strong denial defense from the Warriors in the opening stanza of the second half. McCollum went on to finish with 35 points on 31 shots.

No Damian Jones. I blame CJ McCollum and the Blazers for being a little too good tonight. Thankfully, here’s a recent interview with our rookie. Kerr said he wanted to play him. So it will happen. Stay strong, people.