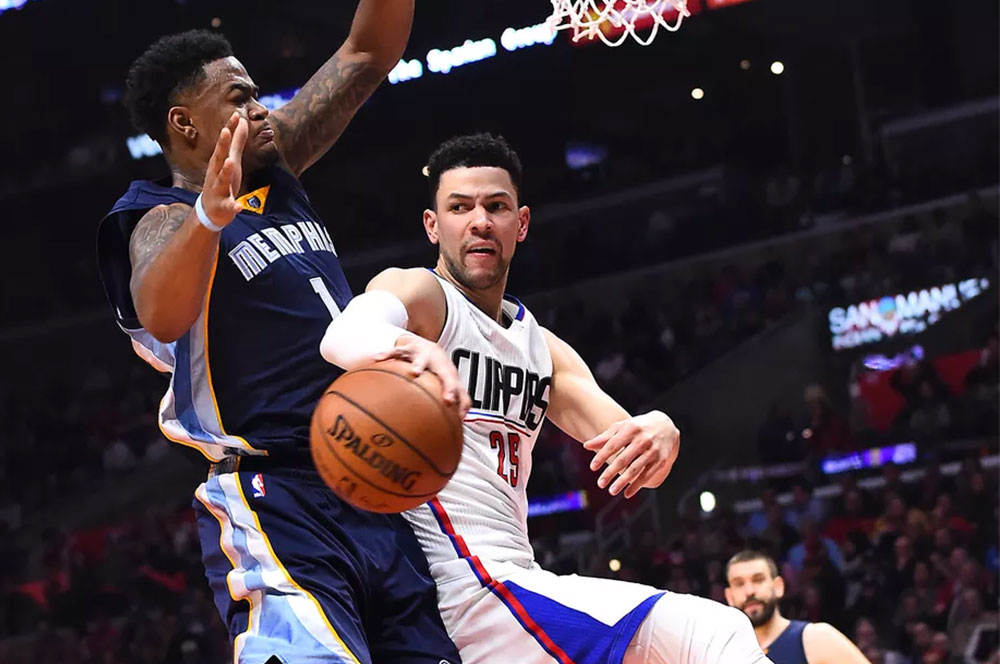 The Grizzlies tried to muck it up on Hawaii night, but the Clippers beat Memphis at its own game.

No Chris Paul, no problem. Austin Rivers stepped into the star’s void and through the Memphis Grizzlies’ defense for a season-high 28 points as the Clippers toppled their rivals, 115-106.

Austin’s night typified the Clippers’: tough, skillful, a little sloppy, but relentless. His father’s lineups have struggled to score consistently without either of LA’s two playmaking stars, as spacing and regular ball movement have been harder to come by, but Austin blitzed the hoop, earning seven free-throw attempts and using his frequent penetration to dish out a team-high seven assists.

In fact, most every Clipper played in attack mode. With JJ Redick struggling from deep — he finished 2-for-8 from three -- the Clipper offense found its best success out in transition and at the basket. The Clippers racked up 45 free-throw attempts, 20 more than the Grizzlies. Even Redick joined in, making 7-of-8 from the line on his way to 19 points. Home cooking be damned, a lot of that total came by way of the Clippers’ frequent and enterprising drives.

Jamal Crawford and DeAndre Jordan also stepped up with star performances. Crawford nailed 3-of-6 from downrange on his way to 22 points. His ability to find DeAndre rolling to the basket was a rare sight for a team that’s seen little of its signature Chris-Paul-and-Blake-Griffin-based pick and roll play lately. DeAndre finished one basket shy of 20/20. Marc Gasol may want to spend less time hanging around the three-point line -- DeAndre outrebounded him by 16.

The Clippers’ television broadcast highlighted that the Memphis Grizzlies are 13-2 on the season in games within three points during the final minute. The Grizzlies could get no closer than five in the last 60 seconds of this one, but it illustrates the size of the Clippers’ accomplishment in tipping a quality veteran team, even one playing its second game in as many nights.

Adding to that accomplishment was the size of the hole out of which the Clippers climbed. After an uncharacteristically open first quarter, the Grizzlies took charge in the second, imposing their (now bordering on cliché) grit-n-grind style upon the game to take a 10-point halftime lead.

A lot of that lead was built on Memphis’ 9-for-16 three-point performance in the first half. But even with Coach Fizdale’s emphasis on a more modern mode of play, the Grizzlies aren’t well stocked with sharpshooters, and they fell hard back to Earth in the second half.

A great deal of that plummet may be credited to the Clippers’ halftime adjustments. When pressed by your very own Lucas Hann, Doc noted that his staff ran through film of every first-half Memphis three-pointer to highlight for players the guilty defensive breakdowns. The Grizzlies missed all but two of their 12 second-half attempts.

The two Grizzlies you might actually call sharpshooters, Mike Conley and Troy Daniels, fizzled. Conley the Clipper Killer finished with 17 points but needed 16 shots to get there, and he converted only one of his five attempts from deep. Daniels, coming off a December of destruction, missed eight of his 11 three-point tries.

Conley also committed two atypically boneheaded plays in the game’s closing minute. He bailed out a bad Clipper possession by fouling Austin Rivers on a desperation heave for three free throws with 51.3 seconds remaining that stretched the lead to eight, then dribbled it off his knee on the following possession. Any chance of a Memphis comeback essentially died there.

The Clippers are back in action Friday in Sacramento.

Zach Randolph was his usual rumbling self, scoring 13 on 50% shooting in just 19 minutes off the bench. Vince Carter added 11 points and 2 blocks. 2 blocks! From a 40-year-old wing!

Doc didn’t rely on his bench to win this one. DeAndre, Felton, and JJ played 37 minutes each, while Austin logged 44.

Memphis forward Chandler Parsons, still easing his way into game shape, did not play as the Grizzlies were on a 24-hour turnaround after last night’s loss to the Lakers.

Memphis’ other starting forward, JaMychal Green, also sat tonight after leaving last night’s game with a facial injury. He was diagnosed today with a fractured maxilla, which Google tells me is his upper jawbone. (Ouch). Jarell Martin started, and struggled, in his place, earning a -10 in just 12 minutes.