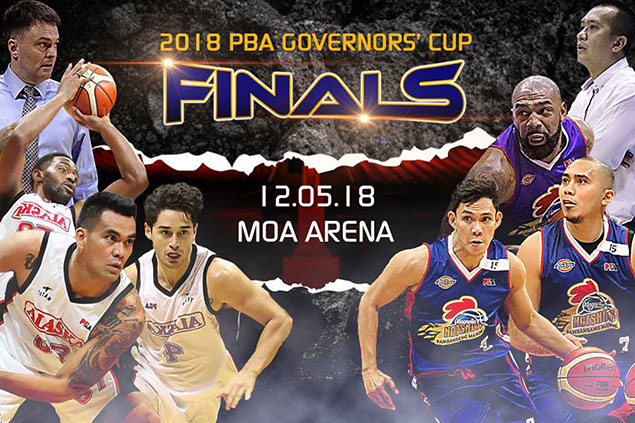 Philippine Basketball Association coaches are finding it hard to pick which team has the advantage in the PBA Governors’ Cup Finals’ showdown between the Magnolia Hotshots and the Alaska Milk Aces.

“It’s a toss-up. The two teams are almost even, tingin ko walang nakakalamang,” said national coach Yeng Guiao.
Guiao and most of the PBA coaches foresee a grind-out battle in each game and a long series that may well reach the full distance.

“I will not be surprised if all the games go down the wire. I expect a Game 7 that would make the PBA fans very happy,” said San Miguel coach Leo Austria.

The Hotshots and the Aces are now about to step up their buildup for the series opener on Dec. 5 at the Mall of Asia Arena in Pasay City.

For Magnolia, center/forward Ian Sangalang has begged off from the national pool so that he can concentrate on his therapy for his injury and be at his best form for the best-of-seven series.
“I can understand his case,” said Guiao.

The national mentor feels Magnolia has the slight edge in frontcourt, with Sangalang, Rafi Reavis, Rodney Brondial, Aldrech Ramos and Kyle Pascual, but Alaska has the advantage in the backcourt because of the defensive pressure put up by Chris Banchero, Jvee Casio, Ping Exciminiano and Simon Enciso.

Austria, meanwhile, feels Magnolia has the advantage in manpower, but Alaska can compensate on whatever disadvantage it has on its tried and tested system.

“We all know Alaska’s system. They just keep on improving every conference with it,” said Austria.
The SMB bench chieftain, however, thinks Magnolia is dangerous with the fact that anybody from its core group can explode at any time.

And he also acknowledges the capability of the Hotshots to play tough defense.
“Na-stop nga nila si Justin Brownlee (in the Magnolia-Ginebra semis series). So I think they can also find a way to stop Mike Harris,” Austria pointed out.

But putting all factors together, Guiao and Austria insist it’s a tough call.