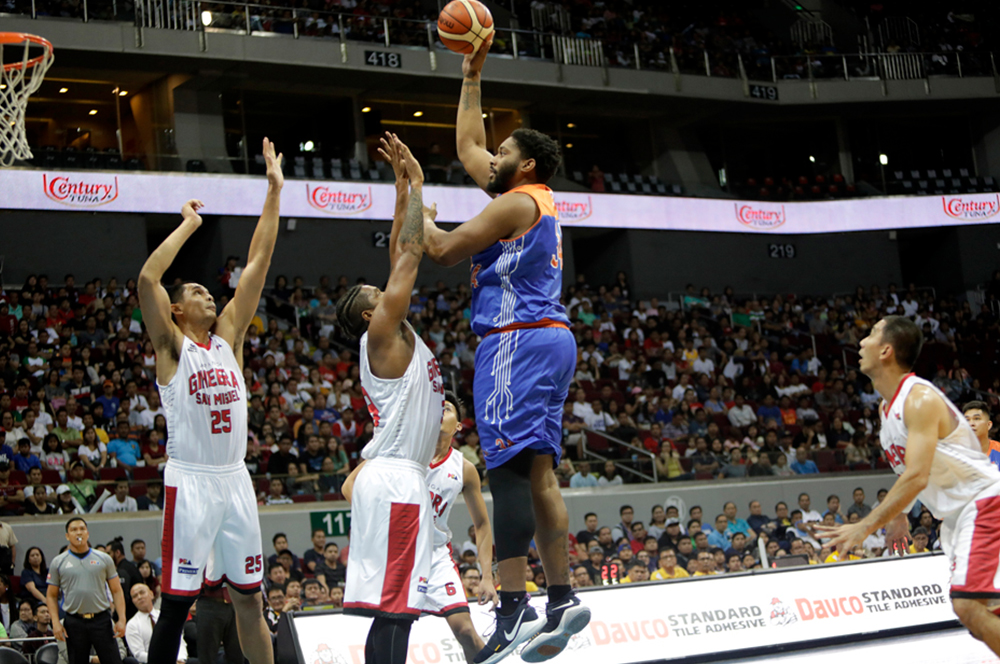 TNT KaTropa got their semifinal bid in the Philippine Basketball Association Commissioner’s Cup to a good start, defeating the Barangay Ginebra San Miguel Kings, 100-94, in Game One of their best-of-five series last night at the Mall of Asia Arena.

Boosted by a strong start and the towering play of import Joshua Smith, the KaTropa maintained the cushion they got the rest of the contest to upend the top-seeded Kings for the early series lead.

Rookie RR Pogoy jump-started TNT’s attack, scoring 10 points in the first quarter, going 2-of-3 from three-point land, to help his team to a 23-13 lead at the end of the opening frame.

The KaTropa established their biggest lead of 13 points, 45-32, at that point with 1:23 to go in the period before the Kings made a late 5-0 spurt to narrow their deficit at 45-37 by the halftime break.

Barangay Ginebra came out firing in the third period, with import Justin Brownlee pacing, going on an 8-4 run in the first few minutes to cut down TNT’s lead to just four points, 49-45.

But Mr. Smith would not allow the KaTropa to be swallowed by the Kings’ charge, scoring 11 points as they fashioned out a 15-4 run after to regain the momentum and build their biggest lead of 15 points, 64-59, with seven minutes remaining.

Barangay Ginebra though would rally back anew as TNT rested Mr. Smith, slashing the gap to three points, 64-61.

It was, however, a short reprieved as TNT created distance again upon Mr. Smith’s return to help his team to stay above water, 73-66, by the end of the third.

The two teams battled at the start of the payoff period, going back and forth, with Barangay Ginebra reducing to four anew its deficit, 87-83, with 5:29 remaining in the game.

The match further went to cardiac mode in the next three minutes, with TNT’s lead just two points, 92-90, with less the two minutes to play in the game.

A Joe Devance basket later pulled the Kings once again to within three points.

Messrs. Smith and Brownlee exchanged baskets thereafter before Jayson Castro nailed a big three-pointer with 14 ticks left to make it a six-point lead for TNT, 100-94, which eventually wound up as the final score.

Mr. Pogoy had 17 while Mr. De Ocampo finished with 12 points.

Barangay Ginebra, meanwhile, was paced by Mr. Brownlee with 24 points on top of 14 rebounds and six assists.

LA Tenorio and Japeth Aguilar each had 15 markers.

“We fight. The last series was tough, with two games going into overtime. Right now we are playing a good team and the crowd. But that does not matter and I’m proud of the guys,” said Mr. Smith, named player of the game, of the mindset they have in the semifinal series.

“They brought me here to be a physical presence inside and that’s what I’m doing. I’ll continue to be aggressive as long as I’m not in foul trouble,” he added.

Game Two of the Barangay Ginebra-TNT series is tomorrow at 7 p.m. also at the Mall of Asia Arena.