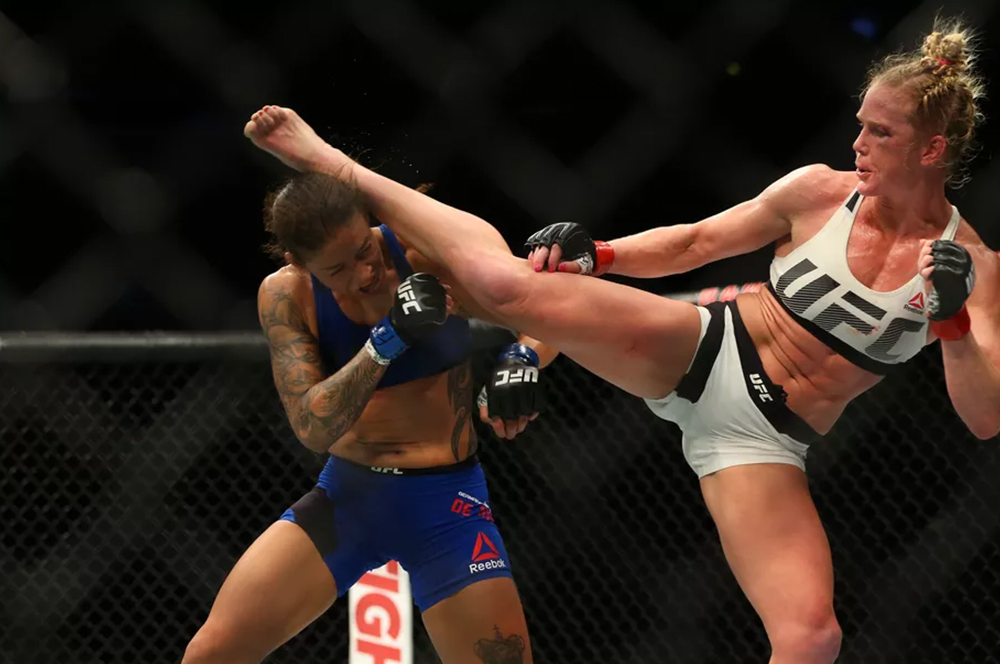 Holm and Correia dig their way out of the divisional foxhole this June 17, 2017 at the Singapore Indoor Stadium in Kallang, Singapore.

Phil: The air in the arena in Singapore braces itself, knowing it's about to get a brutal beating.

History / Introduction to Both Fighters

David: It feels just like yesterday when we collectively gasped in horror as Holm decapitated Ronda Rousey. Maybe it's because the UFC loves showing clips of Holm decapitating Ronda in all of their promos. Two years isn't a long time, but that's how much time has passed since Holm last experienced a victory. A three fight losing streak sometimes looks worse than it really is when talking about a former champ, but in this case, it really is as bad as it looks. She completely gaffed against Miesha Tate, had no answer for Shevchenko, and then there's Germaine de Randamie, doing everything in her power to make sure we see right through the people's champ illusion. This is supposed to be a back-on-track fight for Holm. We may joke about Bethe's laterals, but she's a modest threat here, and will be either a gateway, or a prison against Holm's future in the UFC.

Phil: Few people have ridden more of a roller coaster of public perception than Holm. Super undefeated boxer; weirdly sloppy decision machine; the woman who crushed the unbeatable Rousey, and finally her current state, where she's fighting to hang onto the tattered shreds of her credibility against one of the division's gatekeepers. She'll always own perhaps the most iconic moment in the women's side of the sport. This is a referendum on whether she can be more than that.

David: Ever since getting knocked senseless against Rousey, Bethe has done nothing but fight in razor close three round decisions. It's the perfect fight for both women, despite the series of yawns and piss breaks it may induce in its viewers. I don't personally see Correia's future in the division as high ceiling. She's one of the division's premiere boxers, such as it is. Does this bode well for her against Holm?

Phil: I like Correia. I genuinely appreciate her utter, near-irrational self-belief. Brutally knocked out by a far superior athlete? Rousey got lucky, and Correia barely stopped running her mouth for a minute. As a mediocre athlete with no sporting base and a late start, she's frankly done astonishingly well, maximizing her limited physical gifts by training with elite camps and developing a pretty technical boxing game.

David: A win for either woman means nothing. A loss is everything. Holm potentially becomes a free agent (?), even though I believe the UFC likes her enough to support her through a 4-fight losing streak. Correia gets to stay, but she has the kind of style that can be easily exploited by the right strategy even at the lower levels of bantamweight.

Phil: Despite her skid, Holm is still the biggest remaining star that the UFC have at 135, by a considerable margin. In the MMA bubble, I think we perhaps underestimate how much she is one of the few fighters which people really know about outside of it. WME|IMG would really, really like her to win this, and I wouldn't put it past them trying to catapult her into another title shot off the back of it. They want a dominating, Rousey-esque win. Are they going to get it? I'm not sure.

Where do they want it?

David: Holm's fighting style could best be symbolized by the manta ray - a doe-eyed creature whose size feels more intimidating than it actually is. Like the Arab Swordsman, her movement is something of a special effect. She throws punches and combinations at range that are critical to suppressing offense than generating it. Still, I think recent fights have soured our collective impression of Holm. Except for Shevchenko, Holm has been the more efficient striker in all of her bouts. Despite the simplistic shielding she does, she still possesses a solid straight left, can counter attack, and chambers her left leg with the best of them.

Phil: Holm is a fighter who has built a game built for maximizing a long frame, good baseline athleticism, and toughness. The "offense suppressing" point you made is a key one: Holm tends to throw a LOT of strikes that don't hit anything. Essentially she has an area of space in front of her that she just fills with lots of punches, and occasionally kicks. Opponents which walk into it are in trouble. Those which have stayed away have been a bit of a different matter. When Holm has been compelled to come in, she tends to do so behind marching combinations which have left her vulnerable to opponents angling off and cracking her with a counter. Essentially she's been able to out-tough and out-work most people she's fought in her career: she can avoid to have a 34% strike accuracy because she just throws so much that most other women can't keep up.

David: Hot take - Correia is a sneaky good boxer. I know, I know. We're not here for technical analysis like Connor and Patrick. We're here to make make jokes about Correia's athleticism. But beneath the rough, SuperChexx flexibility is a fighter who throws well in two important domains - offensively in proximity, and defensively at range. She has good instincts in general, able to keep her left at arm’s distance to protect from obvious clinch entries while maintaining good posture for the left counter. Once she gets going, she has a good nose for pressure, varying her punches without overloading or expending too much energy. If there’s any real problem with Correia, other than lacking self awareness, it’s that she’s a real plodder of a striker. She can’t pivot, or angle in and out the way fighters who focus on movement do. This more or less why she was a sitting duck against Ronda. Ronda’s an awful technical boxer, but she’s ridiculously strong and her ability to punish Correia coming straight in worked because Correia is just too damn rigid.

Phil: I think Correia is genuinely in some ways a better technical striker than Holm. This doesn't mean she's going to win, or even do particularly well in this fight. The style match at least is against her (Correia is the aggressor, Holm the willing counter striker), but I think that Correia has a style which is built for growth, and which shows it almost every time out. Holm, conversely, has stalled out. There's only so many kiai arm punches which can be thrown before things like better footwork and punching mechanics start to be necessities. This isn't to say that Correia is a technically flawless puncher either (she tends to push her strikes, much as Holm does), but she gets better every time out. She has a good instinct for the counter, and can hit some nice combinations. She can get somewhat tunnel vision in looking for them: lack of movement exposed her to a few hard kicks from Marion Reneau.

Insight from past fights

Phil: If there's been a consistent factor in Correia's fights against more physically gifted women, it's been that when the opponent decides that it's time to just be an athlete and forget the technical stuff, she just cannot hang. They decide to go strength for strength, and she simply gets overwhelmed. This was true against Reneau, Pennington and (of course) Rousey, who forced the issue right from the start. Interestingly, though, Holm isn't really the type to force a physical advantage: her long-distance style is meant to preserve rather than overwhelm.

David: Holm has struggled in areas that Correia doesn’t possess. Holm may not have the physicality of Ronda or Reneau, but I think it’s more than just being physically overwhelmed - it’s being at a physical disadvantage. She’s a case study in what makes athleticism the difference at high levels. Without a special kind of strength, size, speed, or agility, Correia is left to cover up for each space with technical acumen - and her technique isn’t big enough to cover so much disadvantaged space.

Phil: Jet lag? Other than that, regardless of how you feel about them personally, these are two of the hardest working, most professional fighters in the division. I don't expect any weirdness. Holm may be struggling under the pressure due to her 3-fight skid, but I honestly don't see her as the kind of person to be affected by it much.

David: I feel like we’ve sort of ragged on these two fighters, but I consider it just ragging. However, that’s not to say this isn’t a solid technical fight on paper. They match up well, and the fact that neither women has the kind of durability shutting power just promises that many more adventures in the clinch, at range, et cetera. I actually like this fight a lot when you step away from the granular criticisms of their game.

Phil: There are two ways this could go: either Correia's aggressive style makes her meat for Holm's counters, or she finds a way to draw Holm onto her. In the second scenario, I can see her having a good deal of success. However, given how she's faded out of fights, and her general weakness to kicking offense, I just can't see her winning a 5-round decision against someone who is just so much bigger, tougher, and able to keep a better pace than her. Those Holm left body kicks will add up. Holly Holm by unanimous decision.

David: Holm’s last three fights are a good indicator of what she struggles with - adjustments and technique. Can Correia take a tactical approach to beating Holm the way Tate did, or accrue advantages over Holm with technique like Shevchenko? The answer to both is no, obviously. Holly Holm by Decision.