Team Lakay scored a 1-2 win-loss record in ONE: Inside the Matrix III.

Team Lakay scored a 1-2 win-loss record in ONE: Inside the Matrix III. 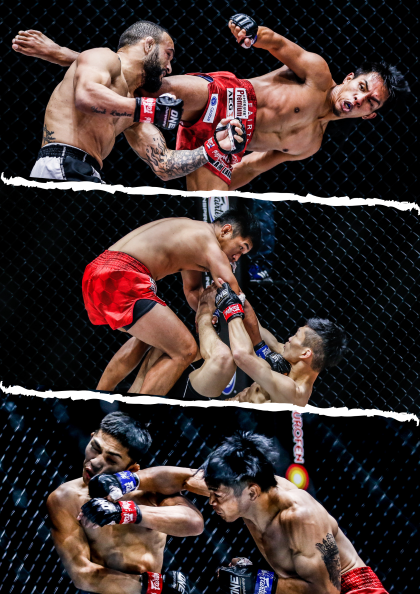 Lineker and Belingon met at the center of the ONE Circle and looked to trade their heaviest shots. Belingon dazzled with his usual display of flashy spinning attacks and powerful combinations, while Lineker kept tight pressure and battered the Filipino with concussive hooks and uppercuts.

Geje 'Gravity' Eustaquio showed off his masterful striking skills against South Korea's 'Running Man' Song Min Jong and won by unanimous decision. It was a vintage performance for the Team Lakay veteran, as Eustaquio dominated with a showcase of sharp counterstrikes. Song would look to employ his grappling, but Eustaquio used his experience to escape a ground battle. In the end, all three judges scored the bout in favor of Eustaquio to win by unanimous decision.

In the main event, Brazilian thunderbolt John 'Hands of Stone' Lineker put on a dynamic performance to stop former ONE Bantamweight World Champion and current #1-ranked contender Kevin 'The Silencer' Belingon in the second round.

"King Kong Warrior" Fan Rong of China spoiled the mixed martial arts debut of Brazilian Jiu-Jitsu legend Yuri Simoes to win by unanimous decision after three rounds. Simoes hunted for takedowns all night, while Fan punished him with thudding counters. As the bout wore on, Simoes began to tire, and Fan capitalized by landing a plethora of thunderous strikes. By the final bell, Fan was clearly ahead on the scorecards, as he defeated the two-time ADCC World Champion.