Sweeter than a KO victory

Sweeter than a KO victory 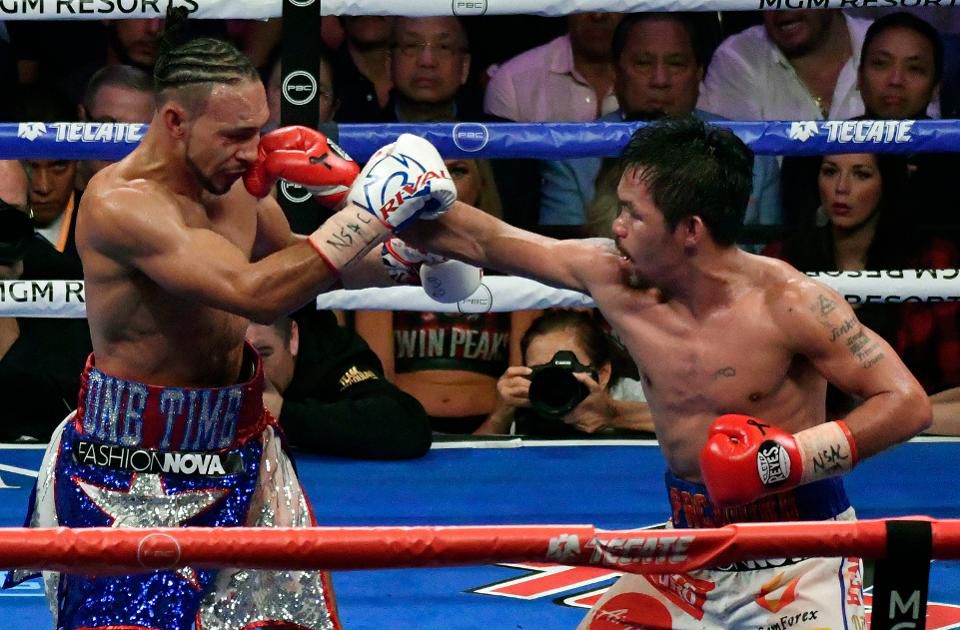 “In sport, you only see the fighter, but it’s teamwork. Without a good team, you will never be the best. In boxing, you have to work with the best coach, the best lawyer, the best manager, the best doctor. Exactly the same principle applies in politics.”
-Vitali Klitschko

In fact, it was sweeter than a knockout (KO) victory because of the quality of action and because it was the only split decision in his ring ledger that was not protested.
And his duel against Thurman was action-packed, toe-to-toe, brutal, and had the making of the “Fight of the Year.”
Pacquiao’s only other split decision victory was against his former conqueror Juan Manuel Marquez in their rematch on March 15, 2008.
And it was smeared by a terrible protest and condemnation from the Team Marquez that insisted the dynamite-fisted Mexican clearly out-shuttled and out-punched the then 29-year-old ring icon from Gen. Santos City claiming Pacquiao “looked more like the real loser” between the two after 12 rounds in a duel for Marquez’s WBC super featherweight title.

Like in Pacquiao’s fight against Thurman, the Filipino southpaw also scored a flash knockdown in the third round.
Marquez, a durable warrior, quickly rebounded and won the Rounds 5, 6, 8, 11, and 12. Marquez also won the Round 2. Pacquiao won the Rounds 1, 3, 4, 7, 9, and 10 plus the knockdown.
Because of Team Marquez’s insistence and persistence, Marquez was awarded two more multi-million fights against Pacquiao– losing the third by 12-round majority decision and winning the fourth by 6th round KO.
The other split decision topic in Pacquiao’s record was as controversial as his split decision win over Marquez: a 12-round loss to Timothy Bradley Jr. for WBO welterweight diadem on June 9, 2012.
In that highly disputed split decision defeat of Pacquiao, nobody believed Bradley Jr. had won except Bradely Jr. himself, who entered the post-fight press conference on a wheelchair, and his handlers.
Pacquiao settled the issue with a sensational 12-round unanimous decision win in their rematch on April 9, 2016.

Pacquiao’s 12-round split decision win against Thurman was as explosive and bloody as his 12-round split decision win against Marquez, but Thurman and his team did not question the verdict.
Team Thurman did not denounce the two judges who awarded Pacquiao the identical 115-112 scores.
The former champion from Clearwater, Florida showed tremendous sportsmanship and professionalism in accepting the split decision defeat; he even acknowledged Pacquiao’s ferocity and talent.
“I felt I tested him and myself. The judges saw it their way and now Manny Pacquiao is the champion,” Thurman stated. “It just hit me in the right spot and had me bleeding. It didn’t bother me too much. I was focused on putting pressure but he was quite conservative. I really thought I was putting pressure on him but my numbers were not up to par.
“There was so much going on and in that moment I knew it would be difficult to get the judges on my side. I was obviously hurt in that fight. That’s boxing and, obviously, he was well prepared.
“He started with the knockdown in the first and then the body shot in the end was enough to convince the judges. I thought I would be able to do some countering and pressure him. Some of the things I wanted to do I did. Put I came up short in the numbers game.
“It was a blessing and a lesson to have a tremendous fight. Me showing my grit. Of course, I wanted to win the fight and I fell short. I do know that I’m a true champion. I will be back to the top in the sport of boxing. Keith Thurman brings out the best in the welterweight division,” Thurman concluded.
That made Thurman’s split decision loss so unique from Pacquiao’s split decision affairs with Marquez and Bradley Jr., thus Thurman earned the respect of the pundits and the boxing fans.
(The author, who is now based in New York City, used to be the editor of two local dailies in Iloilo)