Jermall Charlo: My style is perfect for Canelo and Golovkin

Jermall Charlo: My style is perfect for Canelo and Golovkin

Jermall Charlo: My style is perfect for Canelo and Golovkin
Boxing 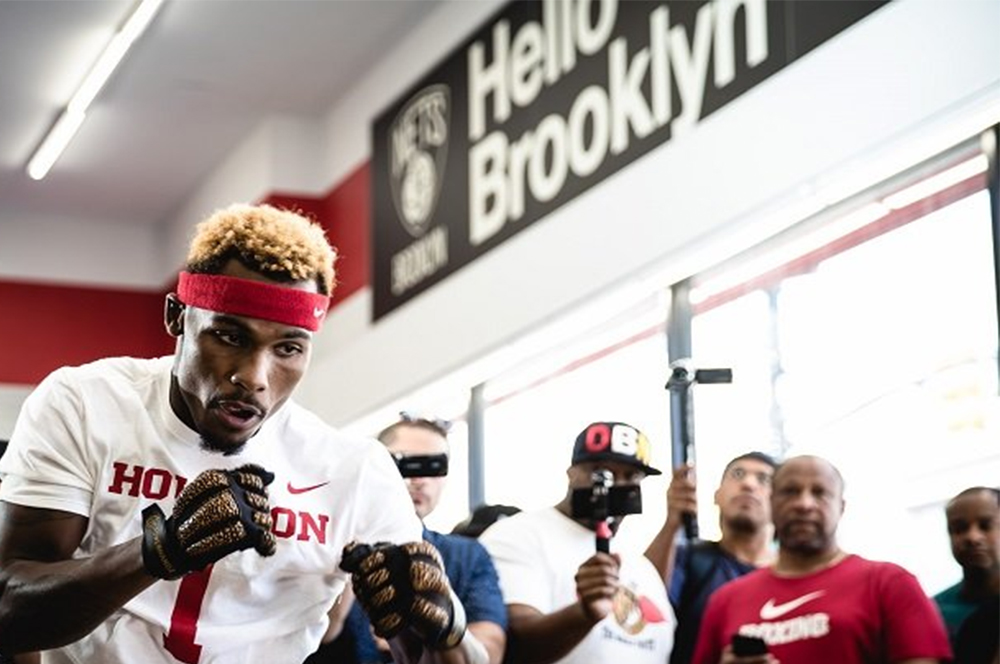 Jermall Charlo is ready to go after big game against Gennady “GGG” Golovkin and Saul “Canelo” Alvarez as soon as he gets past Jorge Sebastian Heiland in their WBC middleweight title eliminator this Saturday night on the Adrien Broner vs. Mikey Garcia undercard at the Barclays Center in Brooklyn, New York.

Charlo (25-0, 19 KOs) sees weakness in Canelo and Golovkin that he thinks that will be perfect for his fighting style. Charlo would be a real threat to beating Canelo. Charlo’s size, speed, and punching power would be a serious headache for Canelo. Charlo could literally stay on the outside and jab the much shorter Canelo for 12 rounds if he wanted to and win an easy decision. That’s what Floyd Mayweather Jr. did in his win over Canelo in 2013. The less popular Erislandy Lara did the same thing to Canelo, but he wasn’t given the decision despite doing pretty much the same thing Mayweather did.

Charlo could be the next superstar for the middleweight division. I’m predicting it now. He’s the new and improved version of Golovkin.

Charlo isn’t the type to just stay on the outside. He’d want to try and knockout Canelo. That’s what makes Charlo such an exciting fighter. He goes for the knockout. He’s not going to play it safe against Canelo or Triple G.

If Charlo is lucky, he’ll get a fight against the winner of the Canelo-Golovkin fight in 2017 or 2018. If he’s unlucky, Charlo might not ever fight either of them. Golovkin is heading in another direction once he gets through with Canelo. If Golovkin loses to Canelo, then he stands a good chance of getting a rematch.

Canelo is the one that Charlo has the best chance of fighting in the future, because he’s going to be sticking around at 160. Unlike Golovkin, Canelo lacks the size to move up in weight to super middleweight. At 5’8” Canelo must stay at 160 or possibly even move back down to 154 depending on how things go against GGG in their fight on September 16.

“My style is perfect for both of them,” said Charlo Dontae’s Boxing Nation about Golovkin and Canelo. “I feel like I can exploit things in Canelo that the greats have exploited; the same thing with GGG. I’m getting better. I’ve been learning as I go. It’s been a journey. I don’t really like to predict the fight because it’s a war,” said Charlo about the Canelo-Golovkin fight. “You can’t really predict.”

It doesn’t matter if Charlo predicts the outcome of the Canelo-Triple G fight or not. There are plenty of people in the boxing world that are already making predictions on the fight. It’s definitely going to be a war whether Canelo wants it to be or not. Golovkin is going to insist that the 27-year-old Mexican star brawl with him. Canelo lacks the leg speed for him run from GGG for any length of time. Golovkin cuts off the ring too well for a short, stocky fighter like Canelo to be able to get away from him for any length of time.

Charlo, 27, expects Heiland (29-4-2, 16 KOs) to apply tons of pressure on him the entire fight this Saturday night. Charlo says that Golovkin avoided Heiland after he was the mandatory challenger for the WBC title for the last 2 years. I don’t know if you can say that Golovkin has been avoiding Heiland. I think it’s more of a case of Golovkin having other fights that were more interesting.

Golovkin has no choice in his last fight to face Danny Jacobs. The World Boxing Association ordered that fight. If Golovkin had told them to get lost, they would have stripped him of his WBA title. Kell Brook was a much better money fight for Golovkin than if he’d defended his WBC title against Heiland. Golovkin has only had 2 fights since he was given the WBC title outside of the ring. It’s not as if Golovkin has had a ton of time to fight Heiland.

“I’m here to fight the best in the world, and I want to be the best in the world,” said Charlo. “I know he’s coming to bring a lot of pressure to me,” said Charlo about Heiland. “It’s going to be a hard fight. He’s been the No.1 ranked contender for two years now. GGG avoided him. So I took that fight. I’m bigger, stronger and faster now I’ve been through adversity. I want to be one of the best fighters in the world. It’s my job to take these types of fights right now. I feel real good at 160. I normally don’t walk around at 160. I have the best nutritionist, and the best training. Ronnie Shields did a good job with me in the gym,” said Charlo.

If Charlo gets past the 30-year-old Heiland, then it’s going to be intriguing to see where Charlo goes from there. He’s going to have to wait his turn to try and get a fight against GGG or Canelo. One guy that Charlo needs to fight is Danny Jacobs. He’s considered the No.2 middleweight in the division behind Golovkin.

If Charlo beats Jacobs, then he’ll be the No.2 guy. Canelo will probably bypass Charlo and look to fight other guys in the middleweight division like Billy Joe Saunders and David Lemieux. If Canelo is serious about wanting to stay at 160, then he’s going to be expected to fight Lemieux and Charlo. He’s not going to be able to ignore them if they’re the only two guys left after Golovkin leaves the weight class to move up to 168.

Canelo could have fought Heiland when he was the WBC middleweight title, but he instead took a title milking fight against Amir Khan. After that fight, Canelo vacated the WBC title. It was seen as a weak move by Canelo in the eyes of a lot of boxing fans, but he has his reasons for not defending his title against Heiland or Golovkin. The WBC ordered Canelo to fight Golovkin, so Heiland wasn’t even an option.

That’s sounds ominous. Charlo isn’t playing around with Heiland. He wants the Argentinian fighter’s scalp in this fight. Charlo isn’t just looking to win a boring decision, even though he could do that with ease if he wanted to play it safe. Heiland is going to need to have a good chin to take all the big shots that harlo is going to be bouncing off his head in the fight.

If Heiland can take Charlo’s power for 12 rounds and fire back with his own big shots, then we could see an exciting war on Saturday night. Austin Trout took Charlo’s best shots and came close to beating him last year in May. Charlo won a 12 round decision, but it was a very competitive fight. Trout wasn’t a cakewalk for Charlo. Supposing that Heiland does take Charlo’s best shots the entire bout, it’s going to be a really hard fight for both of them. Heiland can crack.

Charlo sees Broner as being very hard to beat on Saturday night in his fight against Mikey Garcia. Charlo isn’t making a big in the fight through, but he does think Broner can defeat anyone in the light welterweight division when he’s got his head wired.

“I feel like an in shape, disciplined Adrien Broner can beat any guy in his weight division,” said Charlo. “Stepping in with a guy like Mikey Garcia, that’s a hard competition. I’m not picking any favorite in that fight.”