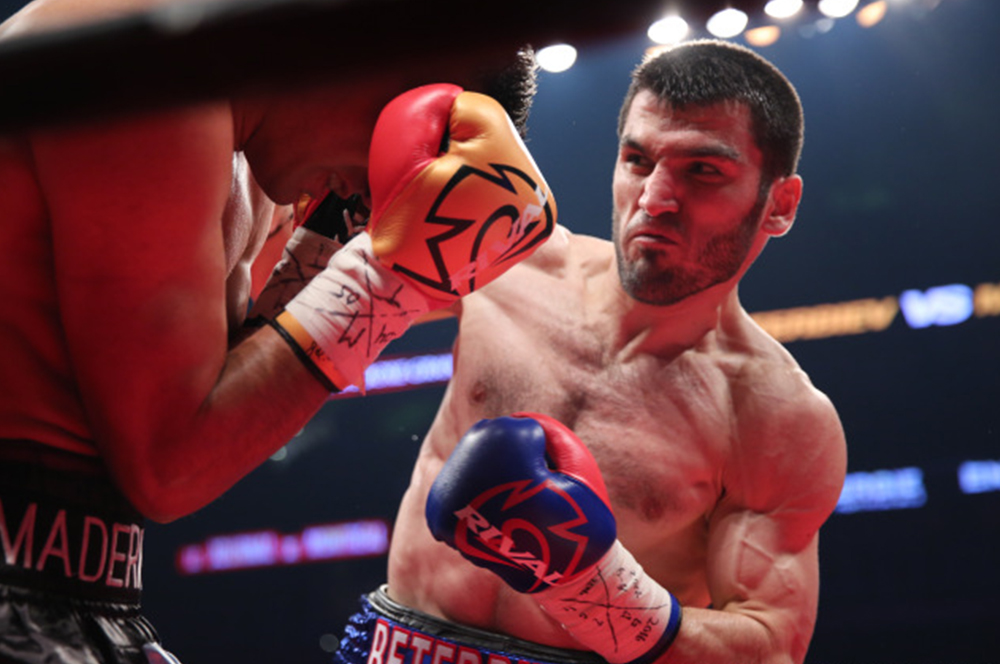 Top Rank stunned a lot of boxing fans earlier on Tuesday in making the winning bid for the purse bid for the IBF light heavyweight eliminator fight between unbeaten 2-time Russian Olympian Artur Beterbiev (11-0, 11 KOs) and Germany’s Enrico Koelling. Top Rank will now be the promoters for the fight, according to Dan Rafael.

Beterbiev is one of the hardest punchers in the light heavyweight division. Of all the guys in the division, he has the skills that match-up best against IBF, WBA, WBO light heavyweight champion Andre “SOG” Ward. Beterbiev could be the guy that unseats Ward or takes over for him if he decides to vacate his belts and move up in weight. Beterbiev would be a real hazard for Ward, due to his excellent fighting skills and his ability to generate massive power from punches thrown at a short distance. Beterbiev is capable of knocking out his opponents in a clinch.

Beterbiev packs a punch with short shots. Ward would have to come at Beterbiev with a whole different approach from the ones we saw him use in his 2 fights against Sergey Kovalev. Fighting on the inside against Beterbiev wouldn’t work for Ward. It would be a pity if Ward abandoned the light heavyweight division right when he’s faced with a tough challenger in Beterbiev. You can’t compare Beterbiev with Kovalev, as these two different fighters. Beterbiev hits harder and he’s at home on the inside. Beterbiev hasn’t shown a weakness in taking body shots, and he’s never been hurt as a pro.

Top Rank doesn’t promote Beterbiev or Koelling. Beterbiev is with adviser Al Haymon. Top Rank and Haymon only rarely work with each other. It’s unclear what Top Rank’s end game is for winning the Beterbiev-Koelling purse bid. Is Top Rank positioning themselves to one day in the future try and promote Beterbiev once he’s no longer with current promoter Yvon Michel? It’s quite possible that Beterbiev could wind up being promoted by Top Rank.

With many of Top Rank’s cards now being televised on ESPN, they could help make a name for Beterbiev if they can keep him busy enough by fighting him 3 or more times per year in the United States. Beterbiev is getting up there in age, so Top Rank would need to speed up his career by fighting him a lot, and hoping he doesn’t get injured like he did in 2015. It would be a big plus if Beterbiev can become a star in the U.S like middleweight champion Gennady Golovkin, who became a big name after just 4 years in fighting in the States. Golovkin’s fights started being shown in the U.S in 2012, and by 2016, he’d already created a big name for himself. The key to Golovkin’s quick rise in popularity was him fighting frequently and knocking everyone out. Golovkin, 35, is a little older than the 32-year-old Beterbiev.

Assuming Top Rank can get Beterbiev busy like Golovkin was, they could make him a star by the time he’s 36. That would be impressive. Beterbiev’s punching power is the type that is not going to go away anytime soon. He might be able to continue to fight at a high level even into his 40s. Top Rank would have a real gem if they can fight Beterbiev enough, and if he can capture one or more of the light heavyweight titles. Ideally, it would be great if Andre Ward defended his IBF light heavyweight title against Beterbiev once he becomes his mandatory challenger by beating Koelling.

Supposing that Beterbiev can take Ward’s scalp, he would be catapulted overnight to stardom in the boxing world. Top Rank promotes unbeaten former Ukrainian Olympian Oleksandr Gvozdyk. It would be interesting to see Beterbiev face Gvozdyk at some point. Top Rank could make that fight or they could keep them in separate lanes to see if the two of them can eventually win light heavyweight titles and dominate the division. Gvozdyk is in a tough position though in having to wait for an eventual title shot against WBC 175lb. champion Adonis Stevenson. It could take years for Gvozdyk to eventually get a crack at Stevenson’s title, as he tends to take a lot of voluntary defenses and he doesn’t fight the dangerous guys.

“We won a purse bid. We think [unified titleholder] Andre Ward is the best light heavyweight in the world and right behind him are [Top Rank-promoted Oleksandr] Gvozdyk and Beterbiev,” Top Rank vice president Carl Moretti said to Dan Rafael at ESPN.com. “And to have the opportunity to showcase both of those guys on this platform, ESPN, in the upcoming weeks and months is great.”

The Beterbiev-Koelling fight is expected to take place in 3 months from now on October 31. The fight will wind up on the undercard of WBO super bantamweight champion Jessie Magdaleno’s title defense against #1 WBO Cesar Juarez on ESPN. The addition of Beterbiev vs. Koelling fight will help create interest among the hardcore boxing fans for the Magdaleno-Juarez fight. Beterbiev is a fan favorite for the hardcore fans. The fans really like Beterbiev a great deal, as he’s known for his knockouts and his incredible punching power.

The two-time Olympian Beterbiev has past wins over Sergey Kovalev in the amateur ranks in Russia. Beterbiev hasn’t been that active through as of late, as he’s had promotional issues and he was also injured for a year with a shoulder problem that sidelined him for a long spell. Beterbiev has had two fights since coming back from his year-long layoff. Beterbiev recently beat Isidro Ranoni Prieto and Ezequiel Osvaldo Maderna. Beterbiev looked superb in stopping both fighters in the early rounds.

Beterbiev, 32, has a very good chance of winning the fight. It’s more than a good chance. It’s pretty much a near certainty that Beterbiev will be beating Koelling. The only question is whether Beterbiev will knock Koelling out to continue his perfect knockout streak since turning pro in 2013. The winner of the Beterbiev-Koelling winner will be the mandatory challenger to IBF 175 pound champion Andre “SOG” Ward. It would be a great fight if Beterbiev could get Ward inside the ring. However, Ward seems to be aiming high in talking about wanting to move up to cruiserweight to see if he can get a fight against Tony Bellew. That fight might not happen though.

If Ward can’t get Bellew, then he might move up to heavyweight if he can get a title shot against Anthony Joshua. That’s another fight that might not happen for Ward. If it does, it’s probably going to happen in 2018. Ward will have a lot of time on his hands before his fights with Bellew or Joshua take place. The question is will Ward be interested in defending his IBF title against Beterbiev? Ward could lose that fight, as Beterbiev is a very good inside fighter with crushing power in close. Can Ward beat Beterbiev with short punches thrown on the inside or will this end badly for the 33-year-old Ward?

What’s interesting about Tuesday’s purse bid is Beterbiev’s promoter Yvon Michel didn’t bid on the fight, according to Rafael. Beterbiev is still with Michel; although it’s unclear for how much longer he’ll be with him. Once Beterbiev is a free agent, he should have a lot of top promoters looking to sign him.