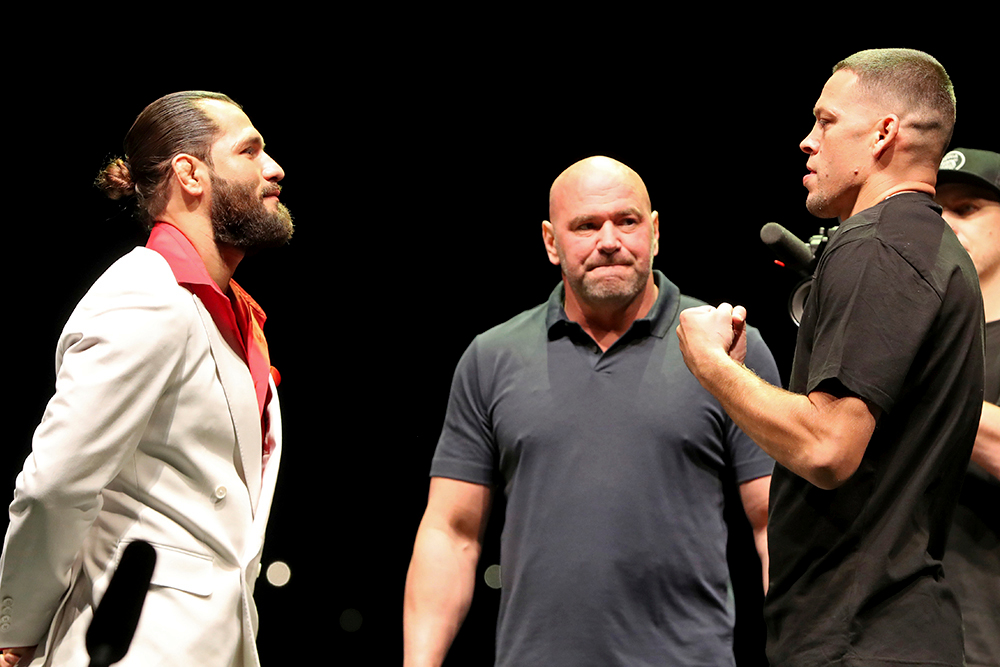 Let’s get whimsical. The experience of watching the first UFC exists on a scale that’s somewhere between the knuckle-and-elbow soothers thrown between Rowdy Roddy Piper and Keith David in ‘They Live’, and New York schoolteacher Annie Edson Taylor intentionally becoming the first person to survive a trip over Niagara Falls. The commentary booth that night in Denver, Colorado is literally introduced with a burp while the fights are thoroughly smothered in blood. It’s not quite true daredevilry. But what becomes abundantly clear, while Gerard Gordeau curbstomps Kevin Rosier’s liver, is that everyone involved treated safety like it belonged in the vanguard.

You don’t know have to know why dojo yokels, sumo wrestlers, and evangelicals used to fight bare knuckle on PPV in the early 90’s. Although you might find some pretty good resources on the matter. But it’s a good starting point as we prepare for Jorge Masvidal vs. Nate Diaz.

Why? I’m not sure. If I knew the answer, I wouldn’t be writing this. I would have gone about my usual day, worked my usual nine-to-five, and retreated to my usual fantasies: which, these days, is mostly just a revolving door of science fiction, a few minutes on the treadmill to maintain table top weight, and gluten-free beer. I guess it’s because I see something of a paradox here. MMA was hatched from the HR culture of the 90’s. This “pre-9/11 vacation from history”, as Tom Carson calls it, can’t totally explain why half-naked men were suddenly allowed to protect their nuts from the willful affliction of others with only a speedo. But maybe it explains some of it. In Masvidal vs. Diaz, there’s just something about it. There’s something about this fight’s lineage that feels closer to the early octagon years than whatever has become of its current incarnation.

Plus, I’m just not sure when the UFC (or MMA in general) officially disconnected itself from the world of ninjitsu and no judges (for a night at least).

It certainly wasn’t when Kimo Leopoldo, already an experienced mixed martial artist in 1996, fought and destroyed pro wrestler Bam Bam Bigelow in an obvious cash grab for U-Japan. It wasn’t when Pride sacrificed pro wrestlers to Bob Sapp and Wanderlei Silva like they were fighting to understand one of Jigsaw’s nonsensical blood sermons. It wasn’t when K-1 let Johnnie Morton into the ring, just to experience rigor mortis in rapid fashion. It wasn’t when we were asked to watch Jack Lemmon fight Walter Matthau in a cage. For as often as Dana White willingly shoves his foot in his mouth, his bitter rant on EliteXC was utterly correct. But you could pick from a long list of total insanity. Old Man vs. Oil Arms. Check. Muay Thai matchups with sprinkles and M&M’s glazed across the combatant’s hand wraps? Check. Just kidding. But two men with 3,000,000-volt tasers on their hands comes dangerously close; well, close to pushing the envelope into a hadron collider at least.

And the UFC itself? They’re hardly distanced from the early mandates of ‘anything but fish hooking.’ CM Punk was never gonna be anything but a de-carbonated shot of financial Red Bull into Zuffa’s bottom line. The rich history of reanimating fighters like Tank Abbott has been replaced by reanimating B.J. Penn. Unlike Abbott vs. Ferrozzo II at a dank backyard BBQ, there’s nothing funny about how the UFC has willingly exploited a drawing power that Penn hasn’t had since 2014. It’s worrying for reasons you don’t want to assume, but probably still think about.

As the UFC got itself weight divisions, a dumb theme song, new cameras, new actors, and brought in a different director, the packaging still felt stale. I’m not talking about my personal disinterest in the sport, or “how much better things used to be,” as if it’d be great to see fighters allowed the choice of one or two boxing gloves. I’m talking about the way in which the company culture has constructed itself. After all, it’s never just about sports. No matter what they tell you. If it were, Demetrious Johnson would still be a UFC fighter.

Nowadays, the movie of the week is Grudge Match: The Sequel. How can we even expect an honest observer to watch for the sake of watching a professional athlete perform incredible feats? Is it even possible to watch when people aren’t sufficiently convinced that the two performers hate each other’s guts?

That’s what makes Masvidal vs. Diaz appealing on a deeper level. There are no empty theatrics needed to keep our interest, or nu metal dog whistle to remind us of what we’re missing. We are simply interested. We don’t need more white hat/black hat discord. Masvidal and Diaz were fighters long before they got paid to do it. Their legacies are already intact because their identities are intact. Their pugnacious qualities are natural features; not the revolving debt of anti-PC edgelords, and pro wrestling bluster.

I’m not arguing that Jorge and Nate are modern day “samurai” that deserve Rocky statues in Miami, and Stockton, respectively (not that’d complain; especially if we got a Ronaldo-level accuracy). I’m not here to worship their qualities as supremely righteous. But they’ve grown, and developed outside of the octagon machine. An entire book could be written about Nate Diaz’ soap opera with Dana White. Nate was at Nick’s dinner table when he witnessed the draconian ways in which the UFC negotiated new contracts with fighters. Nick was one of many fighters — later revealed during the Anti-Trust lawsuit — who were ‘tolled’ into taking tougher fights in order to make sure the UFC was showcasing fighters with new contracts instead of ones who could be lost to free agency. To the Diaz brothers, the UFC is a character in a Martin Scorsese movie. Nate would eventually endure similar experiences. Even after signing an eight-fight contract, he received a paltry $15,000 for getting knocked out by Josh Thomson. Keep in mind, this was despite the fact that the average pay for a UFC bout at the time was $89,324, and Nate had already challenged for a world title.

And Jorge? Masvidal was fighting in the streets before he ever set foot in the cage. His similarities to fictional character Tony Montana are uncanny (in a mostly figurative way, though not in the figurative ways you might expect). But nothing quite encapsulates Masvidal’s spirit as during an interview with Joe Rogan about trash talking. For a literal street fighter like Masvidal, trash talking should be fair game. Nothing should be sacred, and all is fair in love and war. Right? Not quite. Masvidal makes it clear, as he does in other sections of the interview, that there’s nothing brave about being an asshole for the sake of being an asshole. He’s not interested in seeing his kids read empty vulgarities masked as micro-virtues. Nor you would expect him to. The streets don’t care about retweets, and political correctness; either as an invocation, or limp rhetorical tool. Just justice.

That’s what makes this a street fight for our times. There’s nothing either one of these men must say in order for us to care more. They’re not looking to make a statement. They are the statement.

We drone on and on about the safety of our statements like the boogeyman is Kimmy Schmidt’s gay roommate, easily offended and extremely online; as opposed to the companies who’ve grown large enough to sanitize the otherwise natural ways in which we make statements about ourselves. Whether it’s Amazon allowing workers to Mean Girls each other, Yelp style; or Facebook, who has a video-game like points system to keep workers from getting fired for their job of making sure you don’t see dick pics and beheadings; screw it, let’s go all the way back to the origins of AT&T to see when submissiveness became a trait worth aspiring to. Making these threads connect to Masvidal and Diaz is above my paygrade. I’ve got a burger scholar talking Texas’ best in a Youtube video to watch. After that, probably a few “stick to sports” comments to read on social media. Which is fine. Most people that think they’re being censored because their platform for speaking is now universally public also don’t know that criticism is a noun. I’ll be okay. And so will you. In truth, you and I both know we’d get along during a They Live ‘anytime someone throws a cheap shot’ drinking game. We’d probably get along watching Masvidal vs. Diaz too.

Where was I? Oh right. In the same way 90’s cultural malaise helped give way to the original spectacle of barely controlled chaos, there’s something soothing in 2019; of watching two of the most sincere prizefighters of this generation getting to fight for money in the digital era of failed seriousness.