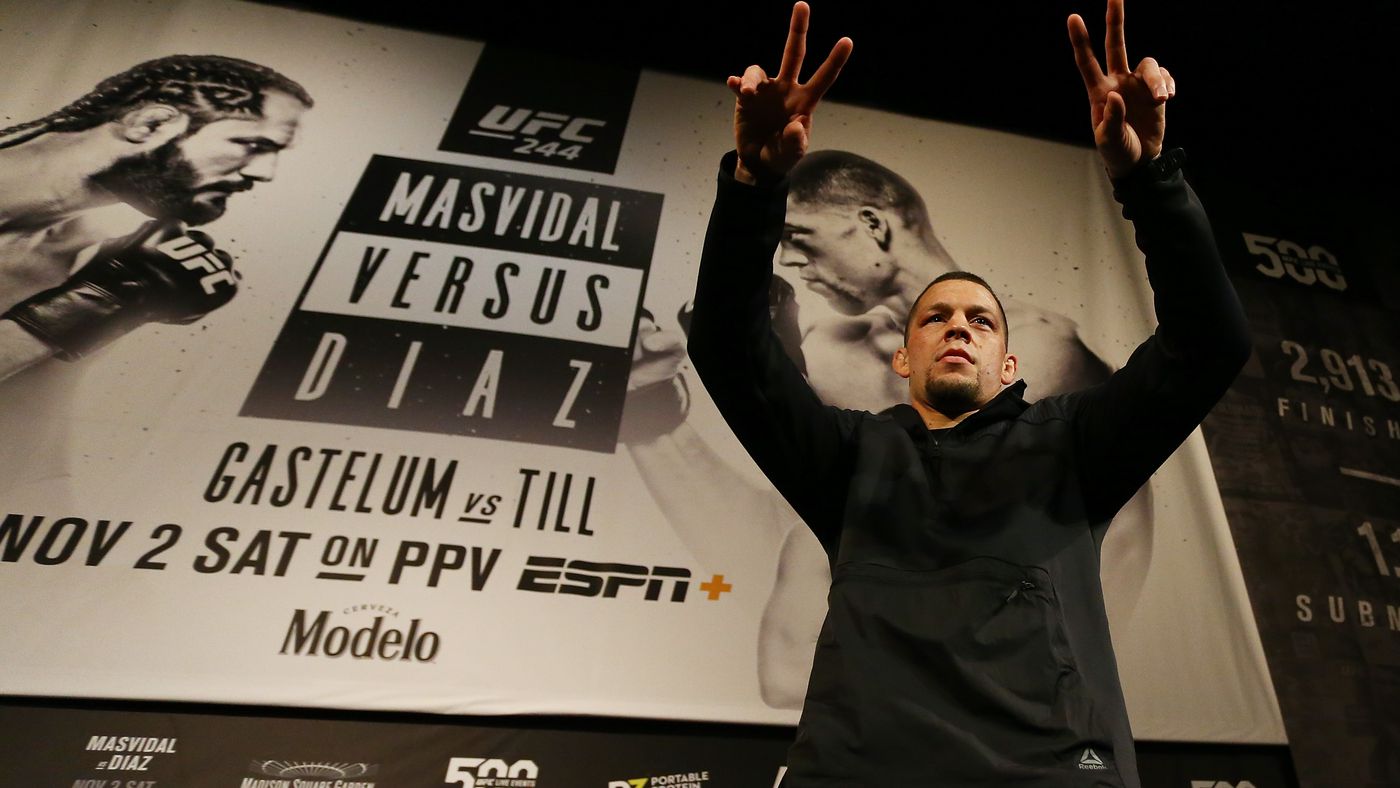 BMF time is almost upon us at the top of a stacked UFC 244 fight card on Saturday. Belts tend to matter in the UFC, perhaps why they hand out interim ones like candy, and we’ll get our first taste soon to see if fans are cool with a fake, albeit glorious, one for entertainment value.

Jorge Masvidal’s riding a two-fight win streak and Nate Diaz only one – unusual for a main event of this magnitude – but being the baddest MF out there ain’t about win streaks. It’s about that heart, grit, attitude, and fighting styles we love where we’ll watch them at any spot on the card, in any event, with any promotion.

The main event’s getting all the focus today with little statistical nuggets thrown in here and there for other fights on the card, so let’s jump into it.

Remember, what you’re about to read are not official UFC statistics. They’re alternative stats generated from official statistics designed to (1) give more weight to the recent present than the distant past and (2) not let one huge or horrible performance dominate the data.

See the notes at the bottom for definitions of certain statistics and check out an earlier piece for an explanation of how this works.

Jorge Masvidal vs. Nate Diaz
For reasons I won’t get into, complete data for Masvidal’s most recent fight… err… few seconds of sprinting into a flying knee were unavailable as of this writing, so all these stats exclude his latest Askren kicking.

With bout closeness metrics almost exactly equal to the welterweight average, neither Diaz nor Masvidal tends to dominate their action, but BMFing isn’t about always dominating. Sometimes you’ve got to get bloody, which Diaz’s face has done eight times in his career or in 20% of his rounds with alternative stats weighting. Masvidal’s face has never been busted up, but he’s done visible damage in 7.7% of his rounds, slightly better than the welterweight average of 6.3% and far better than Diaz’s 0.4%.

So Diaz doesn’t tend to make faces bleed. But he pressures those faces along with the rest of his opponents’ bodies with relentless volume at distance and in the clinch.

Jabs and power to the dome is mostly what Diaz is about at distance. Throwing 34.6 and 37.5 respective jabs and power shots to the head per five minutes in the position (P5M), Diaz puts 61% more volume to the skulls of opponents than a typical welterweight, and he lands at high 35% and 41% rates.

The head jab game is all Diaz at distance, but he tends to get outstruck overall with power shots since opponents like to target his legs. They target Diaz with 8.8 power strikes to the legs P5M (3.2 average) and land 75% of them to steal the power differential.

Masvidal doesn’t tend to be as active as Diaz at distance, but he has positive differentials in every striking category of head jabs and power shots to the head, body, and legs. And with all three knockdown stats (rate, percentage, and round percentage) at least 50% better than a typical welterweight, Masvidal can plant you on your face at a moment’s notice so you better stay sharp, as Darren Till learned the hard way.

Neither fighter shoots for takedowns much at distance or attempts many from the clinch (2.7 P5M for Diaz, 1.7 for Masvidal, 4.5 average), but Diaz still goes to work when clinched up. With control against the cage 59% of the time, Diaz puts massive volume on his opponents with 64.9 power strike attempts P5M (23.2 average) and it’s here that he mixes his targets up more with 25% of those attempts going to the body.

But Masvidal’s no slouch in the clinch either, outlanding opponents with a +15.6 power differential even though he tends to spend more time pressed against the cage (37%) than doing the pressing (44%), along with 19% off the cage.

Masvidal’s takedown defense is better than Diaz’s in all positions, but we’ll see if he even needs to use it. If they end up on the ground, Diaz throws almost double the typical power volume and submission attempts, and he finishes those subs at a 35% clip along with 7% extremely tight but not finished. Masvidal is usually on bottom and his game is essentially get the hell out of there, standing up 5.3 times P5M being controlled, 138% more than average.

It’s interesting that each of these guys has only gone past the third round twice in their long documented careers and all have been losses. Both dropped a five-round decision to Ben Henderson, Diaz dropped another Conor McGregor, and Masvidal fell to Gilbert Melendez. So looking at cardio where most of their work has been – in the first three rounds – the rate at which Diaz lands distance power shots between rounds 1 and 3 increases 79.7% while Masvidal’s pace is relatively flat with a -3.1% change.

Can Diaz outwork Masvidal? Can he wear him down in the clinch for a TKO, decision, or eventual submission? Can Masvidal drop Diaz or stay off the cage and land the cleaner shots throughout the night?

Can’t wait to find out.

Kelvin Gastelum vs. Darren Till
Both fighters drop opponents with better than average knockdown percentages – Till’s significantly so (6.4% of standing power head strikes landed versus a 2.7% average) – and both get dropped more than average (4.1% for Gastelum, 4.2% for Till).

Could make for a fun one.

Stephen Thompson vs. Vicente Luque
In almost half the documented rounds (22 vs. 40), Luque has the exact same number of knockdown rounds (seven) as Wonderboy. And he’s only been dropped once to Wonderboy’s five.

And while he’s not in this list since he only has three documented bouts, watch out for Johnny Walker, a dude who drops opponents with 42.9% of his standing power head strikes landed… so far.

Predictions can be made for five of the 12 scheduled bouts. Be sure to return to Bloody Elbow on Saturday for precise win probabilities and possible bets before UFC 244 starts.

Statistical Notes: A bout closeness measure towards zero means a fighter tends to be in blowouts (win or lose) and towards 100 means they tend to be in very close fights. Strike attempts are per an entire five minute round in each position (P5M) and are categorized as jab or power. A jab is just a non-power strike. Strikes are documented based on where they land or are targeted (head, body, legs), not the type that is thrown (punch, elbow, kick, knee). Visible damage rate is per five minutes the fighter is not on his back. It’s hard to bust up someone’s face while lying on your back. Damage percentage is per power head strike and distance head jab landed. Knockdown rate is per five minutes at distance or in the clinch off the cage. Knockdown percentage is per power head strike landed while standing. It’s really hard to knock someone down if they’re already on the ground. Knockdown/Damage round percentage is the percentage of rounds with at least one knockdown or busted up face, respectively. Clinch control is having the opponent pressed against the cage. Ground control is having top position or the opponent’s back. Submission attempts are per five minutes of ground control minus time spent in the opponent’s guard plus time spent with the opponent in guard.