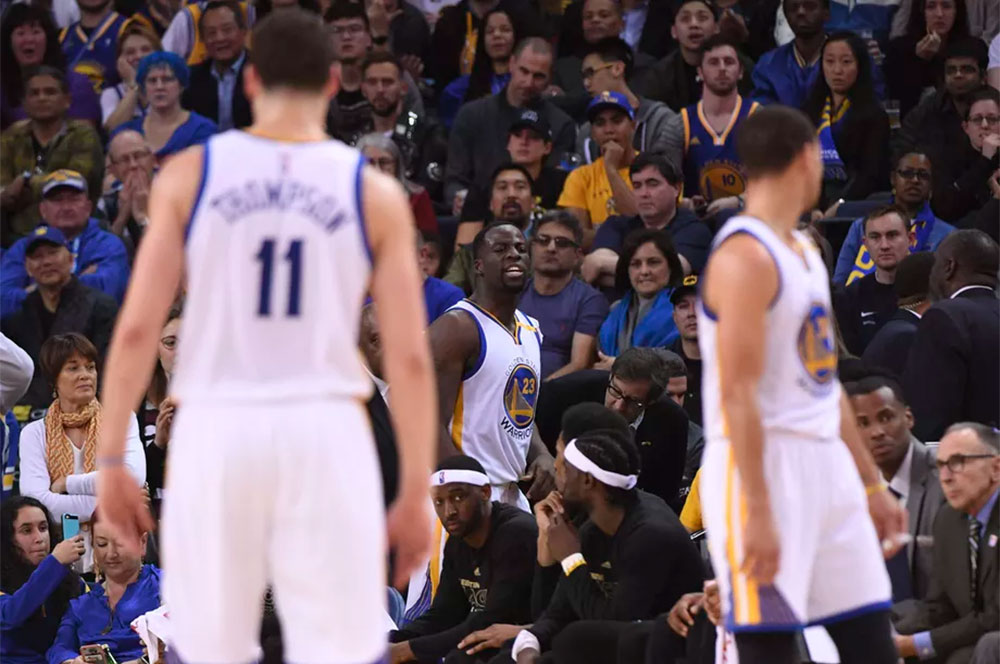 Without Green, the Warriors managed to turn a three point halftime deficit into a 24 point lead at the end of the the third quarter. They did so on the strength of a huge 28-2 run in the middle of the third quarter — finishing that quarter with a 42-15 advantage — and that was pretty much the game. The Warriors displayed their dominance on both ends, allowing no Sacramento Kings’ baskets for almost six minutes while piling on a Warriors-esque beating on the offensive end.

Here’s the core truth that is at the center of Warriors’ fans’ arrogance (or at least mine): the Warriors best-case scenario is complete and utter dominance. Pretty much every other team in the league needs a near-perfect performance to hang with the Warriors. But if the Warriors get it together on both ends of the court, we see a dominant separation fueled in equal parts by stifling defense and unstoppable (baby) offense. This was pretty much the story for tonight, where the Kings played a great game up till about midway through the third quarter ... and then got blown out.

It may have started with JaVale McGee’s dunk off the dribble over DeMarcus Cousins. Or maybe it was Kevin Durant’s block followed by a couple of break away dunks. Or maybe it was Klay Thompson’s 17 point quarter. Whatever the exact cause, the Warriors flipped the proverbial switch and took control of a game that was in question in the first half. And sure, maybe it’s bad that they were in that position in the first place, but it’s hard for me to be dissatisfied when the Warriors had a 30+ point cushion in the fourth.

Did I mention that they did all this without most of their front court? Green did his equivalent of Steve Kerr breaking a clipboard.

Kerr, for his part, could only laugh when asked about controlling emotions saying, “We need him more than we need me.” Emotional control isn’t necessarily one of either of these guys’ strengths.

A seemingly innocuous foul (and yeah, it was a pretty obvious foul) sent Green into a hissy fit. The refs, understandably sick of his shenanigans, were quick to give him a technical foul ... and the another, leading to his ejection. With the Warriors already missing Zaza Pachulia and David West, Green’s inability to control himself put the team in peril.

But the Dubs GOT THIS!

There was a lot of the usual Warriors’ stuff in that 3rd quarter: Durant was crazy good on both ends (21 points, 7 rebounds, 7 assists and 4 blocks), Thompson poured in a ton of points (30 of them, on 18 shots), and Stephen Curry filled in the gaps (2 blocks, 9 assists, 6 rebounds and 13 points).