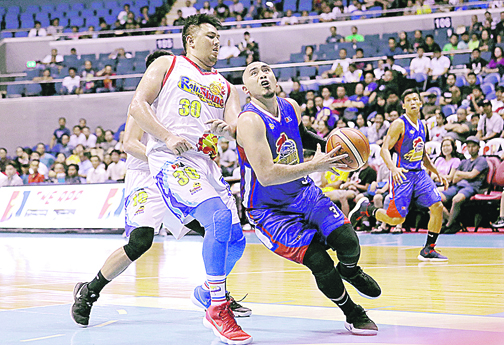 With everything back to a square one at 2-2, the Rain or Shine Elasto Painters and the Magnolia Hotshots go at it again with both eyeing a key advantage as they resume their best-of-seven semifinals showdown in the 2019 Philippine Basketball Association Philippine Cup.

The pivotal Game 5 is scheduled at 7 p.m. at the Cuneta Astrodome tonight.

After dropping the series’ first two games, the Hotshots suddenly got their groove and got back at the Painters by winning the next two to equalize and make it a virtual best-of-three affair.

Following Magnolia’s 94-91 win in Game 4 Monday night, head coach Chito Victolero commended his wards’ resiliency in this resurgence that the Hotshots are having.

“The boys are not giving up and that’s what we need from them. That’s why we were able to tie the series,” said Victolero. “We need to continue trusting our game plan and ourselves for the rest of the series.

Despite this tumultuous stretch, Rain or Shine skipper Gabe Norwood wants his team to keep everything together to regain the upper hand.

“We kind of lost our focus and composure these last two games,” said Norwood. “We need to stay together and control things that we can control.”

The Hotshots dominated most of Game 4 before going on to hold off the Painters.

James Yap actually had the chance to send that game to overtime but his bid went astray.

Meanwhile, San Miguel Beer, ahead 2-1 in the other semis affair, is looking to move closer to the finals as it is figuring in another physical encounter with Phoenix in Game 4 as of this writing.