Raptors pull away in the second half, beat T-Wolves 137-126 for 15th straight win

Raptors pull away in the second half, beat T-Wolves 137-126 for 15th straight win

Raptors pull away in the second half, beat T-Wolves 137-126 for 15th straight win
NBA 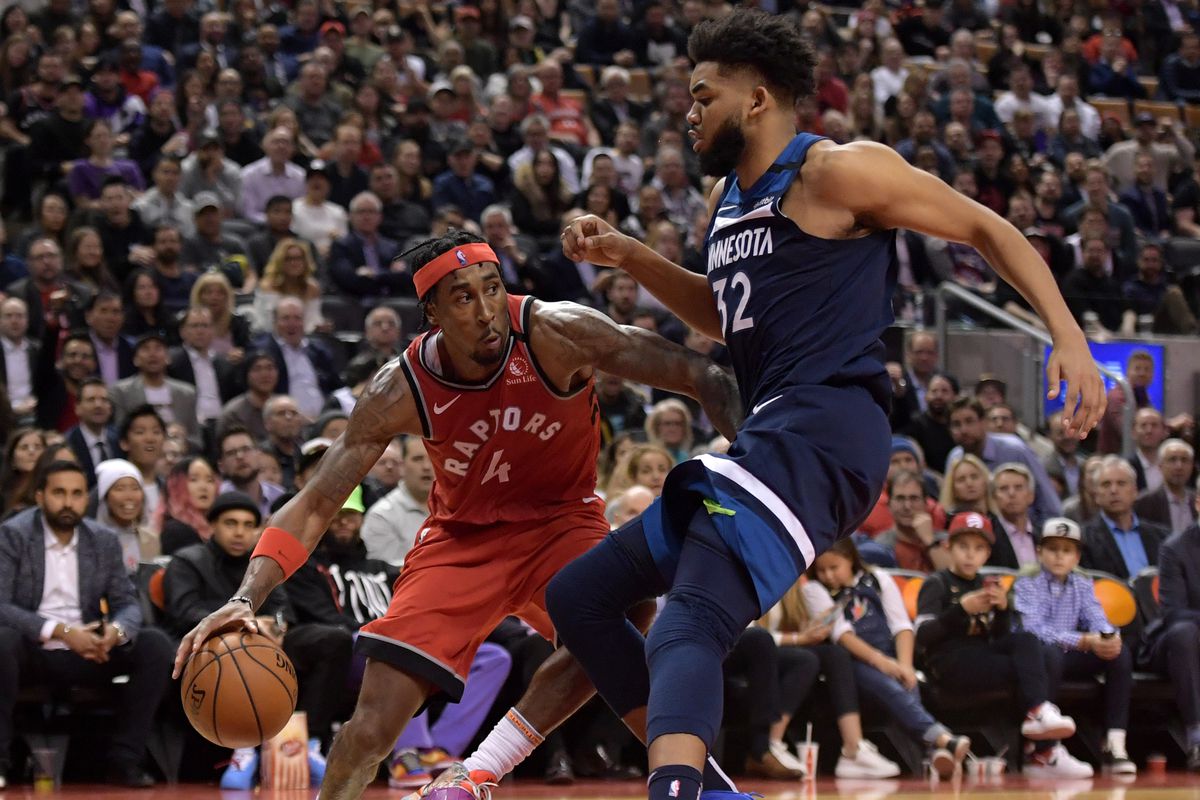 There were a few surprises to announce before Monday night’s Raptors vs. Timberwolves game. Kyle Lowry was in, Serge Ibaka was out, and Rondae Hollis-Jefferson was to get the start against the talented (and large) Karl-Anthony Towns. In theory, the new look T-Wolves, fresh off a satisfying streak-breaking win and welcoming aboard a healthy D’Angelo Russell, could have been considered the favourites. In theory. Instead, Toronto extended their win streak to 15 games — a new Canadian professional sports record — with a 137-126 victory. In retrospect: no surprise there.

The game got off to something of a wild and unpredictable start though, with the Raptors playing some uncharacteristically sloppy ball. Despite shooting 70 percent in the frame (including a blistering 7-of-9 from three), Toronto had only a four point lead as the two teams headed into the second. Fred VanVleet noted the team’s somewhat lackadaisical effort afterwards before acknowledging that sometimes a little additional inspiration is necessary. Especially with one game to go (on Wednesday) before the much-needed All-Star break. Securing that 15th straight win was the obvious goal.

One Raptor who was playing with urgency was Kyle Lowry, fresh off a bout of whiplash endured on Friday night. Toronto’s captain went wild in the first, shooting 5-of-6 from the field (including 3-of-4 from three) for 14 points, plus five assists, in a prime example of opportunism. Lowry knows the Timberwolves, new look or not, are one of the most confused defensive teams in the league, and he took advantage early and often. And while the second quarter got ugly for Toronto — an early trip to the bonus, eight turnovers, a suite of backcuts — Lowry was laying down the template for success.

But that second quarter did indeed get ugly. If not for VanVleet’s 13 points in the frame (he scored 16 in total), it remains unclear how the Raptors would have kept pace with the Timberwolves. Toronto’s bench, already stretched thin, could not put together any of the magic they’d found on Saturday night against the Nets. Terence Davis went 0-for-3 in the frame (1-of-5 overall), Matt Thomas was held scoreless, and Chris Boucher was mostly ineffective when not receiving surgical passes from Lowry. (Patrick McCaw remained Patrick McCaw, for what that’s worth.) The second quarter saw Toronto’s advantage flip from a seven-point lead into an eight-point deficit, as the Timberwolves started to put things together.

It didn’t last though, as the Raptors’ second half performance — in the third quarter especially — reminded us who exactly this team is, even when shorthanded. In that third frame, Toronto’s defense regained its collective form, holding Minnesota to just 33 percent shooting for 19 points. Meanwhile, their offense came alive — they beat up on the Timberwolves in the paint (18 to 4), off the glass (7 second chance points to zero), and in the fastbreak (14 to 3). The Raptors also got their turnovers under control, giving up the ball just twice in those 12 minutes after committing 14 giveaways in the first 24. The primary beneficiary of this surge was OG Anunoby, who had the task (along with Hollis-Jefferson) of anchoring Toronto’s defense, and used it to make his presence known.

For the game, Anunuby had 25 points on 10-of-13 shooting, to go with 12 rebounds, three assists, and three steals. When Toronto needed defense, they could count on OG to get a hand in there and force the issue against both of Minnesota’s best players. His sudden explosion of shooting — Anunoby went 3-of-4 from three too — also meant the Raptors’ offensive attack could find some balance. Lowry’s first half output slowed, VanVleet was content to lean back, and Siakam just picked his spots while Anunoby and his frontcourt partner Rondae frenzied the game in Toronto’s favour. It should have been lights out for Minnesota, but their shooting did enough to keep them in it — even as Russell gradually faded down the stretch, and Towns never quite got comfortable when it mattered.

Despite the closeness of the score heading into the fourth, the Raptors looked to have regained their confidence. In the final frame, Siakam lit up the Timberwolves — who kept switching the 1-5 pick-and-roll action and stranding Russell — for 14 points, Lowry raced out to another seven, and Fred and McCaw hit a pair of threes to ice the game for good. Minnesota gave some fight in those first six minutes, getting the lead down to a mere two points with the help of two 3s from James Johnson (before OG stuffed him on the next attempt). But Toronto never looked particularly concerned. By the end, Siakam was draining an uncontested three to get his team-leading 34 points, to go with six rebounds and five assists; Lowry finished with 27 points, 11 assists, and seven rebounds; and the surprise undersized centre, Hollis-Jefferson, mucked his way to 21 points and six rebounds, while clearly driving Towns insane.

The Raptors now have one game left before a much-needed break. They play the Nets on Wednesday — a winnable game — and then send Lowry, Siakam, Nick Nurse and the coaching staff to All-Star Weekend for what amounts to something of a coronation. They could be riding a 16-gamer or more before we get into March. This season in Toronto still feels unlikely to end with a title, but an accomplishment like that, the focus it takes to win that many games in a row, is indeed one for the history books. And sure, it comes as something of a surprise too.