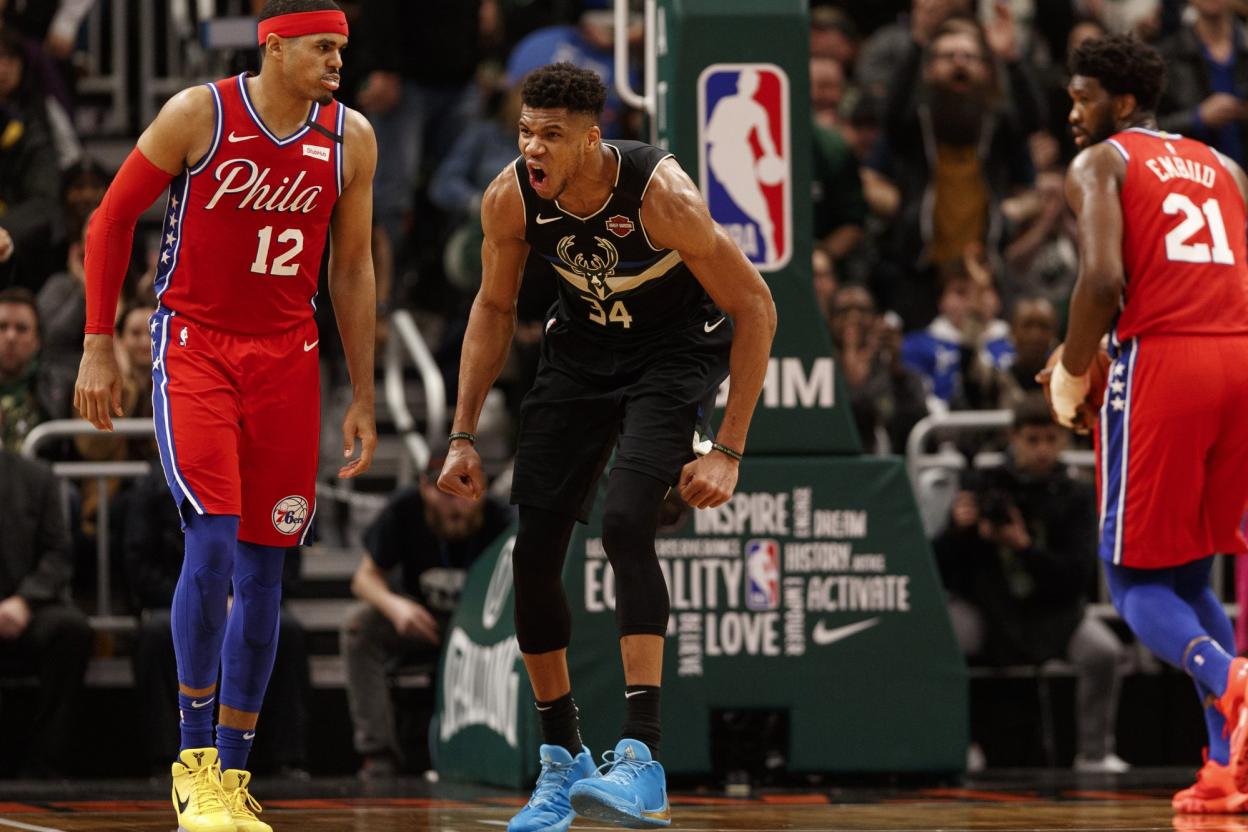 In what was a game that the Bucks had circled on their calendar, Milwaukee prevailed and toppled the Philadelphia 76ers last night at Fiserv Forum, 112-101.

It wasn’t the prettiest of starts to this one. Neither team could really develop any traction, and it was nip and tuck throughout. Milwaukee would look as if they were sleepwalking at times, missing cuts and throwing the ball away on a handful of possessions. Other than Giannis scoring, no other Buck was making major contributions. An 8-0 run by the Sixers would be enough to catapult them in front after one, providing them with a 26-22 lead.

After a porous shooting effort from deep to begin the first, Milwaukee would see their struggles continue in the second. While Philadelphia was scorching from beyond the arc, the Bucks couldn’t hit the broad side of a barn. Khris Middleton really couldn’t get much of anything going. In the first half, he’d tally just a measly four points. However, somehow despite all of that, the Bucks crafted a 54-51 halftime advantage.

Things would start trending north for the Bucks to start the third period. All-Star Khris Middleton would start to find his stroke, connecting on a quick six points to get past the double-digit watermark. Wesley Matthews would also contribute on a timely basis, providing a major bolt to Milwaukee’s efforts and dampening Philadelphia’s spirits. As the quarter came to an end, the Bucks boasted an 86-74 lead.

The same sloppiness that had a negative impact on Milwaukee to begin the night would re-appear to start the final quarter of action — and Philadelphia began to take advantage. A flurry of baskets slashed what was a 12-point advantage to just five points at one point. However, a 3-pointer splashed home by Giannis Antetokounmpo resulted in being the kindling that the Bucks needed to bring a victory home. Eric Bledsoe would follow suit, and that’d be all Milwaukee needed to coast across the finish line.

Giannis Antetokounmpo would earn another massive stat line. He’d conclude his evening with 36 points, 20 rebounds, and six assists. His All-Star teammate Khris Middleton came on with a strong second half and posted 20 points on 8-of-17 shooting, including several threes.

Our old friend Tobias Harris was the leading scorer for Philadelphia, putting forth 25 points. Joel Embiid finished with 19 points and Al Horford scored 15 of his own.

Giannis wasn’t scoring from deep, but that didn’t matter.

Coming into last night, Giannis hadn’t hit a single 3-pointer vs. the Philadelphia 76ers (he went 0-for-7 on Christmas Day). It’d take him a while to finally hit one, but when he did, it was a big one. It’d come late in the fourth and on his seventh and final attempt. However, despite his poor shooting from downtown, he was still able to inflict his typical damage. When it was all said and done, his stat line would read 36 points, 20 rebounds, and six assists. Those 20 boards? A season high. He’d also become just the fifth player in franchise history to record a 30/20 game (done 37 times by K. Abdul-Jabbar and one time each by V. Baker, D. Meyers, and S. Nater). He’s now tallied 30 points and 15 boards in each of his last five games. He’s the only player to accomplish that dating back to the 1985-86 season. Not too shabby at all.

Despite the cold first half, Khris Middleton came on strong late.

It definitely wasn’t a pretty first half for K-Midd. He’d tally just four points and couldn’t get any sort of production rolling. However, the second half was another story. He’d ignite his own flame and go off for 16 points, a complete opposite tale of the first two quarters. I asked Mike Budenholzer what he saw as the biggest difference. He didn’t attribute it to any standalone thing, but rather just the confidence that his shot was going to fall sooner rather than later. He noted how big the four-point play was and how every team is going to struggle to keep Khris down for too long. He’s now scored 20+ points in a season-high five consecutive games and has reached the 20-point mark in all but one of his last nine games. And hey, he’ll be playing along side his teammate Giannis Antetokounmpo in the All-Star Game, as the Greek Freak selected him yesterday. Should be a fun time.

Milwaukee did a magnificent job of controlling Joel Embiid.

Anytime you frustrate Joel Embiid can be counted as a victory, and the Bucks had a lot of those last night. It was very apparent that he couldn’t develop a groove, both inside and outside. Mike Budenholzer attributed discipline as the biggest reason his team had success against him, noting his clever and crafty skills as he’s trying to create contact and get to the free throw line. Embiid wasn’t the only big guy the Bucks had to defend, as Philadelphia featured a healthy dose of Al Horford as well. Wesley Matthews would end up getting a fair run at him and ultimately held his own. Khris Middleton was asked about that and discussed how versatile Matthews is out on the court and noted how Wes and all smaller guys have been huge for the team.

Bonus Bucks Bits
The Bucks have now scored at least 110 points in 12 consecutive games. Milwaukee also owns the longest streak in the NBA this season (15 games). That’s a pretty cool streak to have.

The 100 point streak has been extended to 75 games. It is now in the top 10 of the longest 100-point streaks in NBA history. Milwaukee’s 75 consecutive games scoring 100 points is tied with Denver (12/2/86-11/20-87) for the ninth-longest streak in NBA history.
Those Philadelphia uniforms are clean. They definitely have one of the better schemes in the league, and I love their logos. Especially the Ballin’ Ben Franklin one.
Milwaukee hauled in 60 rebounds as a team last night, marking its NBA-high fifth game of the season with 60 boards. This also surpassed the Bucks’ total of 60-rebound games from last season (4, which was also tied for the league high).