Late-game heroics seal 12th straight win for the Raptors, 119-118 over the Pacers

Late-game heroics seal 12th straight win for the Raptors, 119-118 over the Pacers

Late-game heroics seal 12th straight win for the Raptors, 119-118 over the Pacers
NBA 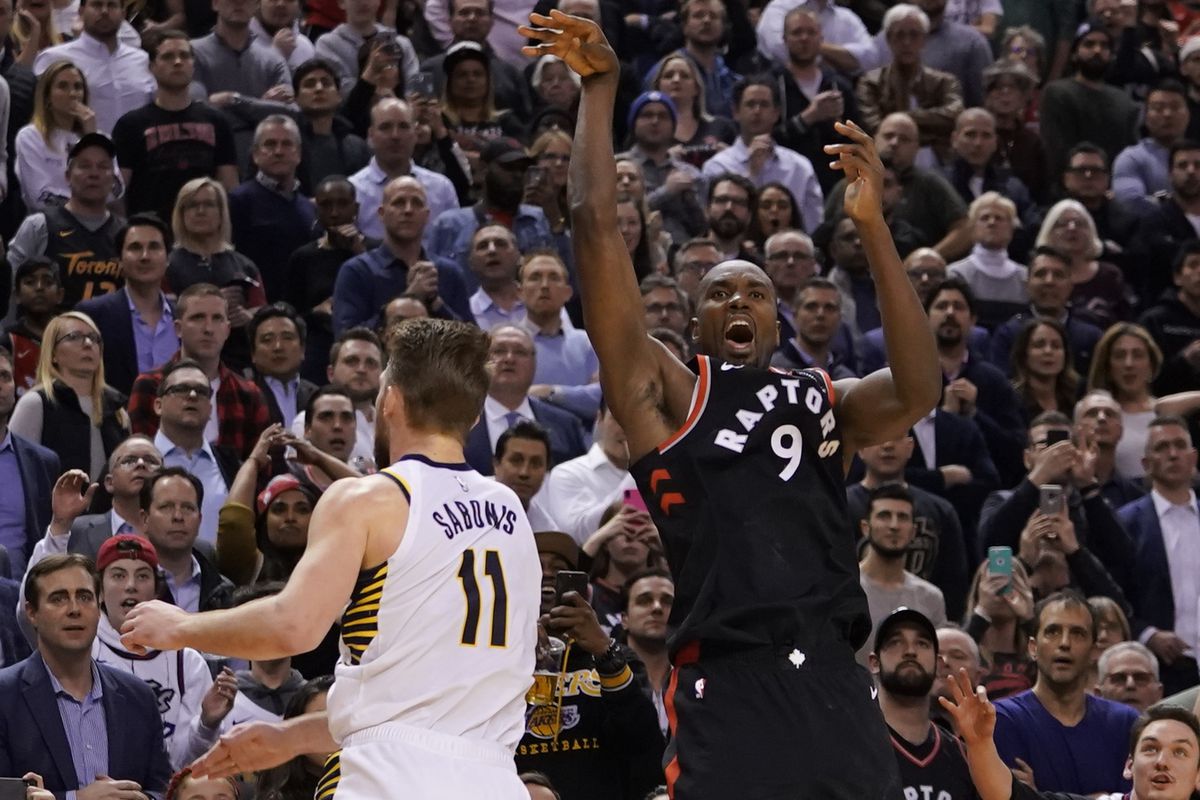 One begins to exhaust the explanations as to how the Raptors keep winning these games. It’s been like this the whole season. On Wednesday night, the Pacers were in Toronto, up by as many as 19, looking for all the world like the cagey Eastern Conference battlers they are. Meanwhile, the Raps looked a step slow, like a team on an uproarious 11-game win streak that was filled with confidence, yes, but tired, too, thanks to the exertions it takes to maintain such a run of victories. Even against a slate of weaker teams it’s damn hard work — and Indiana is not a weak team.

And yet, there the Raptors were once again gamely playing from behind and willing themselves back into tonight’s contest. It doesn’t defy description because we can indeed describe it — will, in fact, go on to do just that — but there remains some ineffable quality about these Raptors, an inner resolve that more often than not coheres in just the right way and at just the right time to do what needs to be done. All of this is to say, despite giving up 19 threes to Indiana, despite allowing a 43-point second quarter, despite the 19-point third quarter deficit, the Raptors beat the Pacers by a score of 119-118. It was their franchise-record 12th win in a row. It was infuriating, it was marvelous. It was Toronto.

If we were deciding on three stars for the game, we wouldn’t have to think too hard before deciding on Kyle Lowry, Pascal Siakam, and Serge Ibaka. There are other contributions to note — the steadying hand of Fred VanVleet at key moments (to say nothing of his 10 points, 7 assists, and 3 steals), the gutsy shooting from Terence Davis (who bombed in three 3s), even a bit of reckless hustle from Chris Boucher — but that trio, the bedrock of this current iteration of the Raptors, set the stage for the team’s collective late-game heroics.

To start, it was Lowry and Ibaka who were the lone Raptors scoring for the team. At one point early on it was 17-13 for Toronto thanks entirely to buckets from the pair. Siakam was inexplicably off at the rim, going 1-of-6 in the first quarter, OG Anunoby was invisible on offense, and Patrick McCaw was his usual McCaw self (though he did hit a three, so there’s that). The Raptors took an early 30-20 lead at the end of the quarter but it didn’t exactly feel comfortable.

Unfortunately once coach Nick Nurse went to his bench things got dicey for the Raptors. Lineups led by Siakam featuring a returned Rondae Hollis-Jefferson, Boucher, Davis, and McCaw went nowhere. Rondae looked particularly — and understandably — rusty, as even his customary handful of attempts in the post proved disastrous for Toronto. The substitution of Lowry or Ibaka didn’t quite goose things either. Meanwhile, the Pacers got wildly hot from three thanks to long-time Raptor killer Doug McDermott, with 13 points in the frame, and Justin Holliday, with 14 of his own. Yes, despite Indiana’s rank at 29th on threes attempted per game, there they were letting fly to great effect. The Raptors tumbled into halftime down 15, their offense in shambles, and their defense running on life support.

Like all great Raptors’ comebacks this season though, this one just sort of happened. The Pacers grew their lead to 19 points by the 9:30 mark of the third and it looked like Toronto was well and truly spent. During those opening minutes, Siakam missed another bunny at the rim, threw a hopeless pass to Ibaka on the move, and we all got to watch the Pacers drill a couple more threes. Then, out of nowhere, a 12-0 run — it really was that abrupt. The Raptors leaned on Lowry, who attacked the rim in lieu of Siakam, got some keen shooting from Davis, and a few free throws from Pascal. Coincidentally, Toronto’s defense also picked up a tick behind a smaller, faster lineup with Siakam and Anunoby in the frontcourt, and suddenly the lead shrunk as low as two. The Raptors would end the quarter down 86-82.

Nurse gave Toronto’s bench lineup another try, but that was folly. The Pacers just pushed their lead back up to an exhausting nine points. Cue the re-entry of Siakam and Lowry, who watched as Ibaka picked up his fifth foul around the 8-minute mark despite being the only player on the floor for Toronto who could score. That trio, with Davis (in place of OG) and VanVleet, made another push. This too was turned away — McDermott was working on a team-leading +21 by this point. All told, the Pacers, if you can believe this, held an 11-point lead with 3:50 left to go in this game. They had been the better team for most of the night, looked to have most of the key matchups covered, and were definitely shooting the ball better from deep. It should have been over.

But the Pacers don’t have Lowry and Siakam, who combined with Ibaka for all of Toronto’s points in the fourth — a big-time 37. It was a clinic. Lowry drove the lane, hit 3s, and quarterbacked the team’s fullcourt pressure. Siakam drew fouls, made steals, grabbed boards, and made life miserable for everyone on the Pacers. And Serge? After keeping the Raptors in it for those desperate opening fourth quarter minutes, he hit a spinning finger roll, made a wicked pass to Siakam for a lay-up, and then hit the dang game-winning three.

Toronto’s defense took over from there — Victor Oladipo got a look but missed, there was a mad scramble but no other shot — and that was it. The Raptors won number 12 in a row even though, quite frankly, they shouldn’t have. Well, that’s what some of the numbers say anyway. But as I said: there’s just something about this Toronto squad that remains impossible to define completely. How it will emerge in any given situation is not quite known either. But it is there. Hoo boy, it is there.