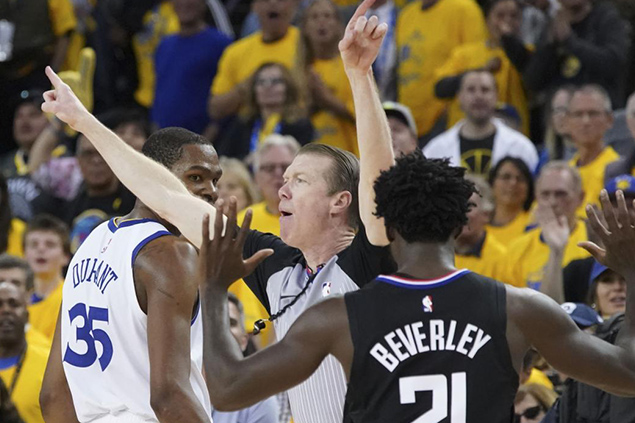 OAKLAND, Calif. -- He stood over the fallen foe and sneered at him, daring him to get up, all that testosterone boiling over and his chest sticking out to invite a conflict and send a buzz through the crowd.

But this wasn’t Ali looking down at Sonny Liston and providing a photo op that became legendary. This was Kevin Durant giving the business to Patrick Beverley in the final minutes of a playoff game. For a mouthy LA Clippers guard and physical defender who lives to irritate, this was nothing unusual for Beverley to be in such a situation.

As for Durant, this is becoming familiar for the Golden State Warriors' All-Star ... and no one is sure whether that’s a good thing.

Durant has never been known for being quick-tempered and easily aggravated throughout much of his career, until recently. As solid as this season has gone for Durant -- wherein he's still established as among the game’s top five players and on track for another championship -- it’s been a perplexing one because of his demeanor.

Durant has clashed with referees, had an in-game dust-up with teammate Draymond Green, racked up technical fouls at an unprecedented pace (for him), cursed the media multiple times for having the audacity to wonder where he’ll play next season and just conducted a game-long trash-talking session with Beverley in which Warriors coach Steve Kerr admitted Durant “took the bait.”

And so this is a reasonable question: What’s eating Kevin Durant?

Asked this Sunday on the eve of Game 2, Kerr, a perceptive coach who has an answer or theory for almost everything, took a pass.

Is Durant feeling angst regarding his free agency this summer? If anything, that should be embraced. Durant will be in high demand and will command a maximum contract that will pay upwards of $200 million. He can stay with the Warriors and flanked by All-Stars and play in a new arena in San Francisco, or move to a place -- New York, perhaps -- he can call his own. Where’s the annoyance in that?

On the surface, Durant seemingly has a charmed life, someone who has it all: Unfathomable riches, good health, maybe a third championship soon, adoring fans, the perks that come with being famous, high respect in the basketball world for his skills and a case for being among the greatest players of all time.

But there’s obviously something we don’t see or understand that’s causing Durant to become moody.

But this was a transformation to a degree. Durant is worshipped at the University of Texas, despite playing only one season there. Folks speak glowingly of his character and especially his generosity by returning and funding athletic programs.

In Seattle, his first NBA stop, Durant was an affable young player who showed maturity beyond his years, a trait that followed him to Oklahoma City after the SuperSonics relocated. When a deadly and destructive tornado caused lives to unravel in central Oklahoma in 2013, Durant pledged his time and money to help the recovery efforts.

And he teared up at his Kia MVP ceremony in 2014, thanking his mother and also saluting teammate Russell Westbrook, a relationship that became fractured and combative after Durant defected to Golden State.

The first time his personality shift took place publicly came during his exit strategy from OKC to the Warriors during free agency. He was caught off guard by the not-so-favorable reaction, heightened by the presence of social media. Durant’s response was to return fire rather than ignore the noise and clumsily created a burner account to go on the attack.

It was astonishing to see: A celebrated and accomplished athlete with global fame trading shots with Bob from Wisconsin.

This only fed the perception of Durant being hypersensitive and thin-skinned, caring too much about what others think of him.

He took his battles to the media, throwing all reporters (even those who don’t handicap his upcoming free-agent choices) on the firing line, often peppering his scolding with expletives. Other times, Durant became curt and short with his answers during interview sessions, whereas before, he was expansive, thoughtful, engaging and unfailingly friendly.

All that matters is what happens between the lines on the court, and yet: Durant had 15 technical fouls this season. That's one shy of tying Green for league-high and did not do so only because one tech was rescinded by the NBA.

His barking at Beverley wasn’t a crime in and of itself. For the most part, Durant had a smile on his face, has known Beverley for years, and the chatter between them Saturday didn’t appear to cross the line or lead to a physical confrontation.

But by getting two technicals with his ejection, Durant can only get four more throughout the playoffs before each subsequent technical results in a one-game suspension. Beverley will likely not have a long postseason, but Durant certainly will. Therefore, advantage, Beverley.

Will this prove costly for Durant and the Warriors in, say, late May or June, if and when they’re chasing champagne?

But at this point, given his pattern of late, nothing is for certain. Kerr discussed the importance of keeping cool in the presence of Beverley and anyone else, for that matter.

“That’s two technicals,” Kerr said. “You get seven technicals, your seventh one is a suspension in the playoffs, whether you play four playoff games or 24, seven is the magic number. So, he’s got four to play with after one game. And that’s what Beverley does.

"We talked about it the last couple days. He’s a hell of a defender who plays hard. We have a lot of respect for him. But you cannot take the bait because that’s a bad trade for us. You just can’t do it. The Clippers have made a lot of good trades this year, and that was maybe their best.”

Yes, because although the victory was already in hand for the Warriors, a seed was planted by Beverley.

Neither Kerr or Durant believe Beverley will get under the skin of the two-time Finals MVP again. The bigger picture lies with the games beyond the first round, assuming the Warriors move forward.

The Durant we see before us today is edgier, saltier, more willing to express himself in ways that aren’t always productive. Durant has gone hardcore, and it certainly makes him more interesting, though to what end?