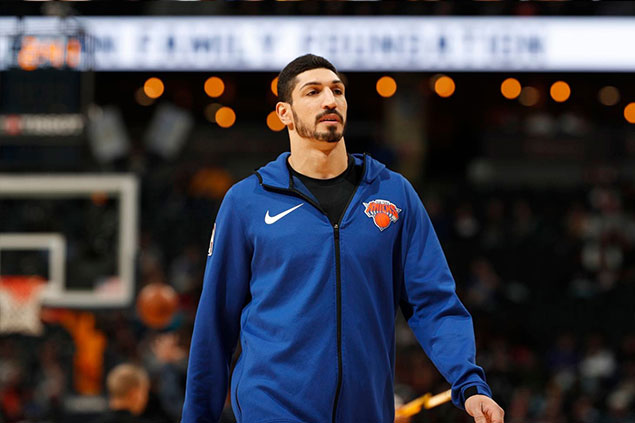 Turkish pro-government newspaper Sabah reported Wednesday that officials in Istanbul were seeking a “red notice” through Interpol, asking law enforcement agencies to detain Kanter, 26, and remand him to Turkish authorities.

Kanter is aligned with Fethullah Gulen, a Muslim cleric, conservative political figure and former Erdogan ally living in exile in rural Pennsylvania. Erdogan’s government accuses Gulen of orchestrating a failed 2016 coup attempt and has jailed thousands of his followers and removed thousands of others from civil society positions.

Turkey’s government considers the Gulenist movement a terrorist organization, and accused Kanter of funding the group. Kanter in a tweet Wednesday said the Turkish government “can NOT present any single piece of evidence of my wrongdoing” and called himself “a law-abiding resident.” He has not returned to Turkey since 2016.

Kanter’s Knicks play the Washington Wizards on Thursday in London, but Kanter did not accompany the team overseas, saying he feared arrest or assassination plot by Turkish agents. Instead, he spent Tuesday meeting with American congressional leaders, including Senate Minority Leader Charles E. Schumer (D-N.Y.) and Sen. Marco Rubio (R-Fla.).

[Enes Kanter: Anyone who speaks out against Erdogan is a target. That includes me.]

In an opinion piece published in The Washington Post this week, Kanter wrote that Erdogan is “wrecking” Turkey, and that “people have been killed, thousands are unjustly imprisoned and countless lives have been ruined.”

“Erdogan is a strongman, and I knew there would be a backlash for the things I’ve said about him and the Turkish government, but I didn’t know it would be like this,” he wrote. “I receive many death threats. I used to love walking around New York City alone, but I can’t do that anymore. My friends and family in Turkey could be arrested just for talking to me. I was unable to attend the Human Rights Foundation’s Oslo Freedom Forum in Norway last year for the same reason that I’m not going to London.”

Kanter attended Gulenist schools starting in second grade. The cleric sponsors schools around the world, and for generations in Turkey those institutions were among the higher achieving in academic standards and were the choice of many parents in the country’s conservative class, according to Soner Cagaptay, director of the Turkish research program at the Washington Institute for Near East Policy.

Gulen was long aligned with Erdogan’s AKP party and provided political backing for Erdogan’s gradual consolidation of power and suppression of secular open society programs, Cagaptay said. But after the 2016 coup attempt in which Gulen-aligned officers may have played a key role, the state targeted thousands of the cleric’s even casual sympathizers.

Kanter’s father, who has been jailed over his son’s political position, was a university professor who was fired during the purge of public employees in 2016. His sister is in medical school, and his two younger brothers play college and high school basketball in the United States.

He tries to see Gulen at his compound in Saylorsburg, Pa., most off days, he said in the April interview. He calls himself the cleric’s “adopted son,” since communicating with his biological family or friends in Turkey would put them in danger, he said.

But Kanter only became active in the Gulenist movement in 2013, after a government corruption probe implicated Erdogan, then the prime minister, who blamed Gulen for directing an international conspiracy to weaken Turkey. The government began targeting Gulenist schools and teachers.

He was visiting Gulen the day of the coup attempt in 2016, during which more than 250 people were killed.

“My friend brought me an iPad and said, ‘Look this is happening,’” Kanter said in April. “I didn’t even know what ‘coup’ meant. I was 24 at the time. I had never seen this. I said, what is this?

“I remember Mr. Gulen and his people were praying for Turkey. No one wanted to see innocent people dying.”

Erdogan consolidated power after the coup attempt and launched a crackdown on political dissidents, free expression and press freedom, linking opposition to the government to the Gulenist movement. That led Kanter to become an even harsher online critic of the government until Turkey issued a warrant for his arrest in May 2017 and canceled his passport on a flight to Romania. He was briefly detained at the airport in Bucharest, but allowed to fly on to London, then the United States.

Kanter replied by calling Erdogan “the Hitler of our century” and talking about the daily threats he has received. He said in April that he receives daily death threats.