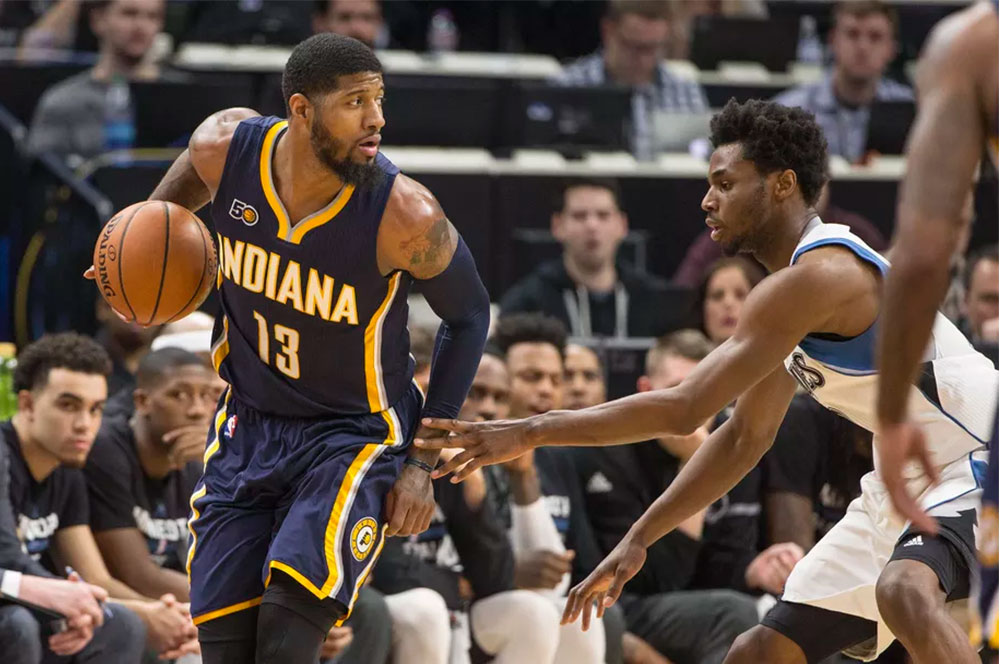 The ups and downs of the Indiana Pacers 2016-17 season continued, trending positively for a night, as they took to the road for a solid outing and a nice win against the Minnesota Timberwolves. After a slow start, the Pacers came together to take the lead late in the first, and never looked back.

Despite not falling behind, the Pacers had to work for the win against the upstart Timberwolves. On numerous occasions, Minnesota closed the deficit, but timely buckets for the Pacers each time the Wolves drew close or tied the game made things that much more difficult for Minnesota.

George said the Pacers “had a pissed-off approach tonight,” which showed not only with the team, but with George, who had a team high 31 points on 12-22 shooting. George noted that it was a night for the veterans to put the young, talented Wolves in their place, and George spent much of the night doing just that to Anthony Wiggins, giving Wiggins a first-hand lesson in guarding a 4-time All-Star.

Jeff Teague also had a big night, with 20 points, 13 assists, and eight rebounds, making the most of his own matchup opposite Ricky Rubio. Teague’s shot has struggled recently, but he had his entire arensal going, hitting three threes and working the floater on a 7-13 night.

Neither team got much from their bench, lending heavy minutes and heavy output from their starting units. Lavoy Allen and Al Jefferson rebounded well for the Pacers, however, which was important in not only giving Indiana a +10 rebounding edge for the game, but in limiting the effectiveness of the units across from Indiana’s struggling bench.

Jefferson led the way with eight and Glenn Robinson III hit a pair of shots in the fourth to give the Pacers just enough room against the always surging Timberwolves, but Allen, Aaron Brooks, and Monta Ellis were a combined 0-9 from the field. Ellis alone was 0-6, having a horrible night in every area that didn’t come from drawing a pair of fouls.

The struggles of both team’s role players led the game to be decided on six 20-point scorers. In the end, the efficiency of the Pacers “big three” trumped Minnesota’s “big three” on a night Indiana shot 52% to Minnesota’s 44%, and hit the same amount of threes on nine less attempts.

Myles Turner was a big part of that efficiency, scoring a cool 23 points on 10-14 shooting. Turner wasn’t matched up with Karl Anthony-Towns for much of the night, but still did well playing up to Anthony-Town’s own big game. Turner also had a pair of blocks, earning a rare “smothered chicken” from Quinn Buckner.

In this game, the Pacers secured their seventh road win of the season. The road struggles have been a near-exclusive reason for why they’ve been unable to break away from .500, but they do improve to 3-3 in their last six road games. That could be seen as a positive sign if not for all of the evidence against this team turning a corner.

Fortunately, the Pacers have been able to respond to adversity well enough to keep them secure in the playoff picture, but the gap between them and the teams above them is growing, making their wasted opportunities all the more maddening. Indiana currently sits in 6th place, two games behind 5th place Washington and 3 1⁄2 games out of home court advantage.

Indiana will have a quick turnaround after this win, facing the Sacramento Kings at home Friday on the second night of a back-to-back.