Isaiah shows the Hornets what time it is, Celtics win 108-98

Isaiah shows the Hornets what time it is, Celtics win 108-98

Isaiah shows the Hornets what time it is, Celtics win 108-98
NBA 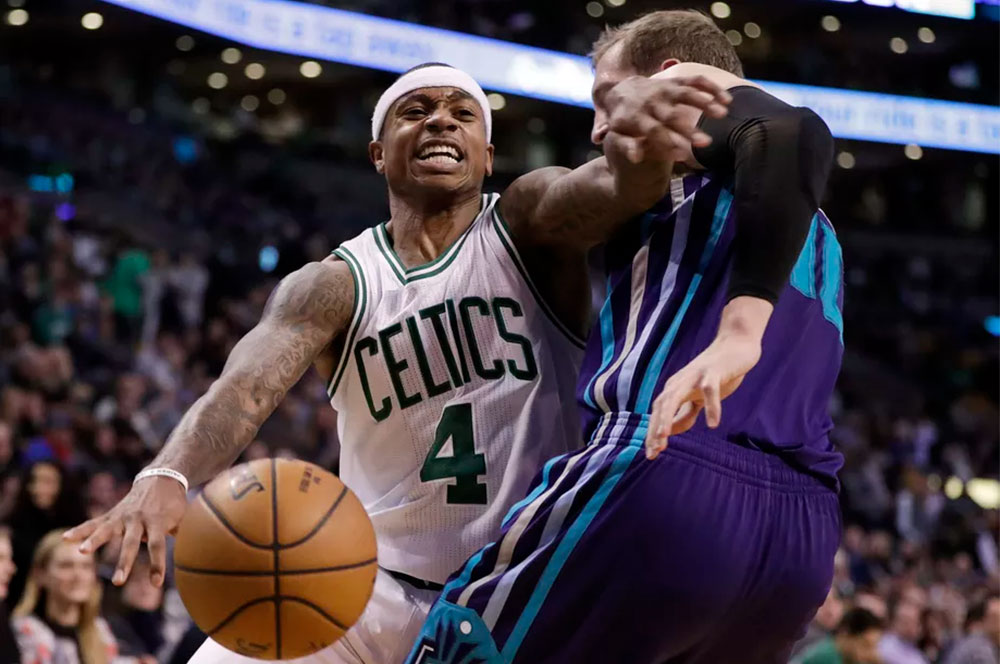 Isaiah had another amazing outing as the Celtics got a good team win with strong contributions from Horford, Crowder, Olynyk and Jaylen Brown

The Celtics came back to the Garden hot after a hard-fought road win in Atlanta that got the league talking. With Avery Bradley back in the starting lineup, the Celtics were at full strength once more and seemed eager to get the win against the slumping Hornets. The Hornets, however, proved to be a tougher opponent than their recent record would suggest.

The Celtics started strong, opening the game with a barrage of effective scoring plays. Complementing their positive offensive play with tough defense, they were able to limit the Hornets’ scoring early. But Charlotte fought back and the scoreline evened up.

Kemba Walker went off for 13 points in the first quarter, helping the Hornets to stay in the game. But Jaylen Brown (who opened the MLK Day game with an eloquent speech in which he urged the home crowd to “Choose love not hate”) helped the Celtics finish the first quarter on a high note as he managed a tough shot through traffic for a three-point play and then followed up with a coast-to-coast running bucket just before the buzzer.

At the end of the first Boston led 34-30 despite struggling to contain Kemba Walker’s offense.

The second quarter belonged to Kelly Olynyk who yet again showed the bounce is real as he put on a ‘kylnyk’ against the Hornets’ interior defense. KO put up numbers in a hurry during the second quarter, proving the man-bun is not to be doubted and showing effort intensity and more than a little bit of skill.

But again the Hornets were able to counter everything the Celtics threw at them, and the game stayed tied for much of the second. As the starters were sent back into the game, each team went at the other hard and matched up fairly equally in intensity and effectiveness.

As the end of the first half approached, Isaiah opened up for back-to-back threes, but then the game slowed down as things got slightly physical before the break. When the buzzer did sound for the first half, Boston held the lead by six, 59-53. The Celtics led in rebounding and in points in the paint, but the game still proved to be a back-and-forth affair with Charlotte finding plenty of opportunities to score.

The third quarter saw both teams slow down as the game became a bit of a slugfest. Each team continued to answer the other on both ends of the floor, and for the most part the Celtics were unable to increase their lead in any meaningful way. Solid team play and strong scoring up and down the roster gave Boston a slight advantage throughout most of the game, though.

Bradley seemed to be a step slow in his return, but this was more than made up for by strong showings from Horford and Crowder, as well as Thomas putting in his regular offensive efforts. As the final frame began, Boston had managed to build a nine-point lead 80-71, and the Celtics looked poised to take control down the stretch.

As the crowd checked their watches, Isaiah Thomas told them the time, and he continued his startling form of fourth-quarter scoring. Wasting no time proving his rep as a late-game dynamo, Isaiah opened up the fourth quarter by scoring five points in the first minute and a half. The King in the Fourth did not disappoint as he sunk another 8 points before the six-minute mark, and the Celtics maintained their lead.

Boston remained dominant throughout the last quarter, holding the Hornets at bay and showing no signs of giving away the lead. While this was probably the result many had predicted, it was good to see the Celtics fight a close contest and then close out the game effectively. There were contributions from up and down the bench, there was plenty of hustle and heart, and Isaiah continued his late-game dominance. All in all it was a good win for the Celtics.