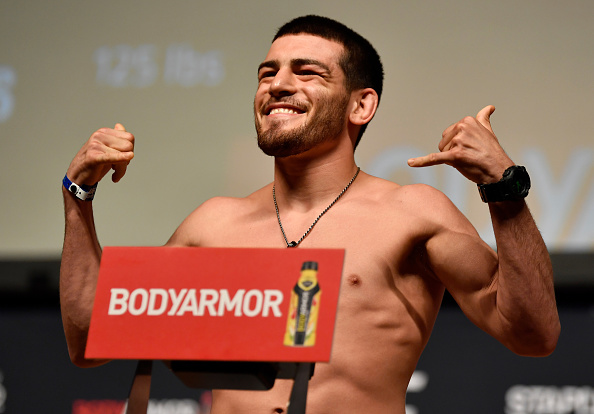 The winners of both contests fight for the 125-pound championship at a later event.

Torres (9-1), a former Titan FC flyweight and bantamweight champion, most recently got into the win column with a decision win over Amir Albazi in his promotional debut at Brave CF 23. He was expected to challenge for the title against Adur before pulling out following the death of his father.

“I was supposed to fight for the title on November 15, and sadly, I had to back out for a personal reason,” Torres told MMAFighting. “My father passed away and some stuff behind the scenes. So I said, ‘You know what? I’m going to go home and take care of myself mentally.’ So, I was supposed to fight Marcel Adur. So now, what (the promotion is) doing is going, ‘Now we have a lot of more flyweights and we signed some good guys. Let’s make a tournament.’”

Torres’ opponent, Nicolau (15-2-1), looks to continue his winning ways after picking up decision win over Felipe Efrain in his Brave CF debut this past August. Prior to this, his six-fight winning streak was snapped at the hands of Dustin Ortiz at UFC on FOX 30; the Brazilian was subsequently handed his UFC walking papers.

“Matteus wrecked [Smolka] for all three rounds. It just looked like a whole different levels. And, honestly, Matteus fighting Dustin Ortiz that next fight, I think it was too soon and too fast of a weight cut. He got clipped after blocking a kick and got dropped from there.”

Adur (14-5) was last seen earning a decision over Marlon Derik, earning his previous title shot against Torres in the process. Prior to this, fans saw the Brazilian come up short to Velimurad Alkhasov.

His opponent, Gordon (12-3), who will be making his Brave CF debut, is currently riding a four fight win streak. In his most recent bout, the man known as “X” submitted Yoni Sherbatov. Prior to this, he blitzed through James Mancini, Jordan Graham and Michael Jordan.

The entire card will be headlined by a lightweight title fight between reigning champion Cleiton Silva (15-2) and Guram Kutateladze (11-2).