INITIAL BOUTS ANNOUNCED FOR ONE: QUEST FOR GOLD IN YANGON ON 23 FEBRUARY

INITIAL BOUTS ANNOUNCED FOR ONE: QUEST FOR GOLD IN YANGON ON 23 FEBRUARY 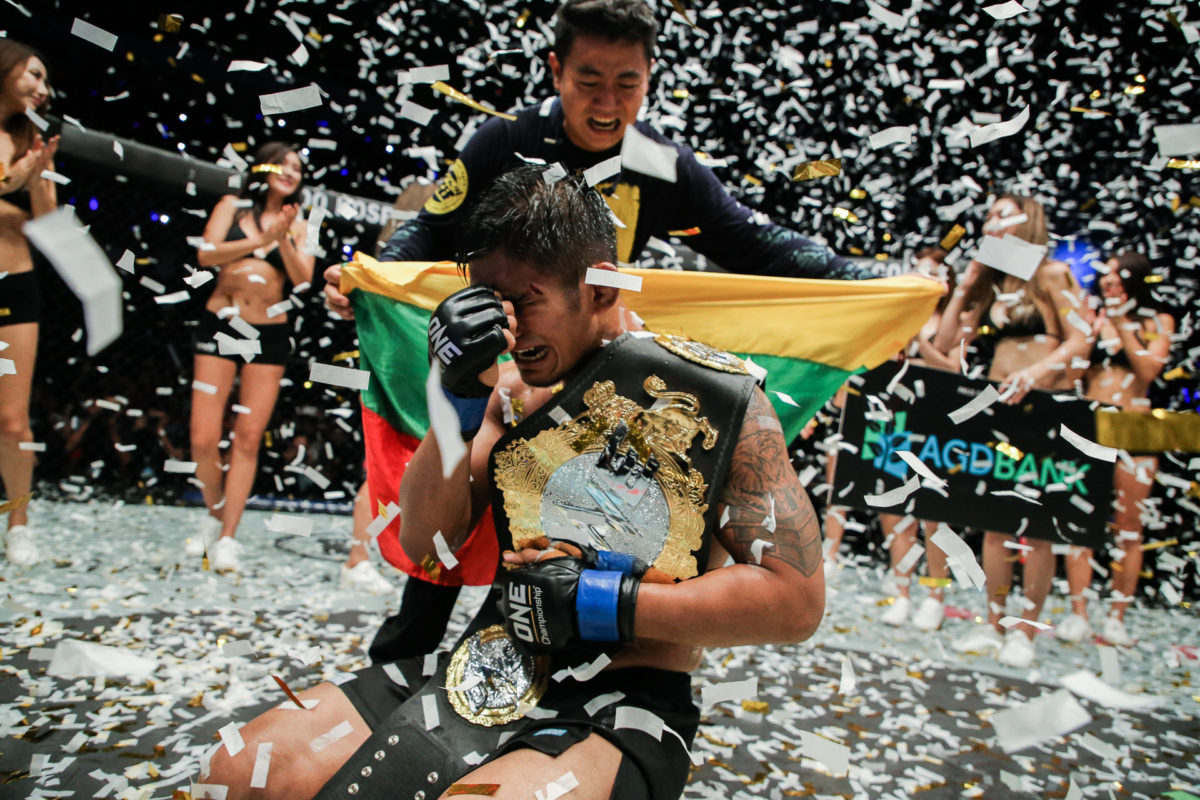 24 January 2018 – Yangon, Myanmar: The largest global sports media property in Asian history, ONE Championship™ (ONE), has just announced the first set of bouts confirmed for ONE: QUEST FOR GOLD, which is set to take place at the Thuwunna Indoor Stadium in Yangon, Myanmar on 23 February. In the main event, ONE Middleweight World Champion “The Burmese Python” Aung La N Sang of Myanmar will compete against Alexandre Machado of Brazil for the vacant ONE Light Heavyweight World Championship. In the co-main event of the evening, Singapore’s Amir Khan will face Russia’s Timofey Nastyukhin.
Ticket information for ONE: QUEST FOR GOLD is available at www.onefc.com.
Chatri Sityodtong, Chairman and CEO of ONE Championship, stated: “Home of ONE Middleweight World Champion Aung La N Sang, Yangon is the epicenter of authentic martial arts action in Myanmar. The last time ONE Championship rocked the Thuwunna Indoor Stadium, ‘The Burmese Python’ blew the roof off the arena with a thrilling performance. Now, he’s set to face off against Brazil’s Alexandre Machado in front of his hometown crowd once again, this time for the vacant ONE Light Heavyweight World Championship. It’s going to be another memorable night of action for fans in Yangon and from all over the world. Get ready for some major fireworks!”
32-year-old Aung La N Sang is Myanmar’s most successful athlete in history, whose impressive submission skills has earned him the moniker of ”The Burmese Python”. Born in Myitkyina in the mountainous Kachin State, he belongs to an ethnic minority known as the Kachin. Aung La N Sang captured the ONE Middleweight World Championship with a unanimous decision victory over Vitaly Bigdash in June of 2017. In his most recent bout, Aung La N Sang needed less than one round to finish heavyweight kickboxing champion Alain Ngalani in ONE’s first ever Open Weight Super-Bout. He faces off against Alexandre Machado next for the vacant ONE Light Heavyweight World Championship.
Brazilian heavyweight champion Alexandre “Bebezao” Machado is a rare breed of martial artist with a penchant for scoring spectacular submissions and highlight-reel knockouts. A Brazilian jiu-jitsu black belt, he currently sports a 8-2 professional record, and will be making his much-anticipated return to the ONE Championship cage. In his last bout, Machado defeated the hulkish Alain Ngalani via second-round technical knockout. After a period away from competition, Machado is back and ready to challenge Aung La N Sang for the vacant ONE Light Heavyweight World Championship.
23-year-old Singaporean top lightweight contender Amir Khan is a martial artist with a stellar professional record of 9-2. He is considered one of the most promising young talents to represent Singapore on the international stage of martial arts. Khan is currently riding an impressive six-bout win streak, with all but one of his victories coming by way of scintillating finish. A certified finisher, Khan’s record includes one win by submission and seven by devastating knockout. In his most recent outing, Khan scored the biggest win of his career with a unanimous decision over veteran Adrian Pang. Next in line for Khan is the always-dangerous Timofey Nastyukhin.
28-year-old Timofey Nastyukhin is a martial artist from Russia competing in ONE Championship’s stacked lightweight division. He owns a professional record of 11-3, with all but one of his wins coming by spectacular finish. With four submissions and six knockouts on his resume, Nastyukhin is considered one of the finest offensive forces in the promotion. He announced his arrival on Asia’s biggest stage with an emphatic flying knee knockout victory over Eduard Folayang in 2014, and also owns stoppage wins over top talents Rob Lisita and Yusuke Kawanago. This time, Nastyukhin is set to face Amir Khan.
Ev “E.T.” Ting is a martial artist from Kuala Lumpur, Malaysia. Living and training out of Auckland, New Zealand, Ting owns a stellar 14-4 professional record, including four wins by submission and five exciting knockouts. A winner of four of his last five bouts over top-caliber opponents, Ting is one of the most talented competitors to come out of Malaysia. In his most recent bout, Ting defeated former ONE Welterweight World Champion Nobutatsu Suzuki via first-round technical knockout. Ting now returns to face another top lightweight contender in Ariel Sexton.
Ariel “Tarzan” Sexton of Vancouver, Canada is widely-considered one of the most skilled grapplers in the world of martial arts. With a black belt in Brazilian jiu-jitsu earned under the watchful eye of the legendary Renzo Gracie, Sexton boasts of eight submissions out of 10 total victories. He also has three thrilling knockout wins to his name. Sexton is coming off win over Eddie Ng and veteran Roger Huerta in his last two outings. After carefully honing his skills in preparation for his next bout, Sexton is now ready to return to the ONE Championship cage, this time to take on Malaysian lightweight Ev Ting.
Winner of the 2017 ONE: LIGHT OF A NATION Flyweight Tournament, Saw Min Min is a Lethwei practitioner with a 10-0-5 record and is one of the rising talents from Myanmar to compete in the ONE Championship cage. Both of his victories in the promotion have come by finish, including one submission and one knockout that proves his well-roundedness. In his last bout, Saw fell to compatriot Ye Thway Ne via first-round knockout. Saw now looks to exact revenge and record his third win in a rematch with Ye Thway Ne.
Veteran Lethwei star and martial artist Ye Thway Ne of Myanmar made his ONE Championship debut in 2016, and has since gone 2-1 in his professional cage career. He owns a stellar professional Lethwei record of 41-1-29. In his most recent contest, Ye battled countryman Saw Min Min, notching a scintillating first-round knockout victory. He is set to return to action this February opposite Saw Min Min once again in what is a highly-anticipated rematch.
For more updates on ONE Championship, please visit www.onefc.com, follow us on Twitter and Instagram @ONEChampionship, and like us on Facebook at https://www.facebook.com/ONECh ampionship.