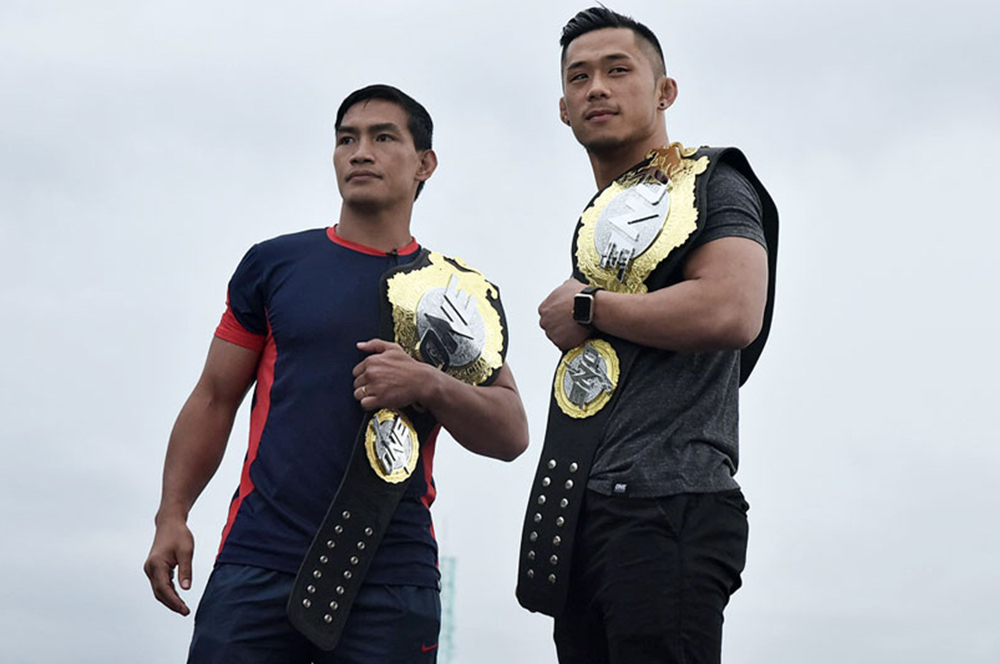 ONE Championship brings a groundbreaking offering when it makes its next stop in Manila in November with the main players touting it as an “entertaining and fun” fight night for mixed martial arts aficionados.

Dubbed “ONE: Legends of the World,” and happening at the Mall of Asia Arena on Nov. 10, the event will mark the first time in its history that ONE, Asia’s largest sports media property, will pit two reigning world champions from different weight divisions in a “super fight.”

ONE lightweight world champion Eduard “Landslide” Folayang of the Philippines will stake his title against world featherweight champion Martin “The Situ-Asian” Nguyen of Australia in a five-round contest.

Mr. Folayang, a native of Baguio City, will make his second title defense of the belt he won in November last year over MMA legend Shinya Aoki while Mr. Nguyen is making his cage return after shocking the MMA community with a devastating knockout win over erstwhile champion Marat Gafarov in August.

The headliners are up with their upcoming showdown, highlighting the dynamic that goes with such fight involving world champions.

Mr. Folayang (18-5) said he welcomes the new challenge presented to him in his latest fight albeit admitting it would entail a lot from him as a fighter.

“Crossover fights like this are very interesting and challenging. It’s another way for us fighters to showcase our skills. But it’s not easy and you really have to prepare well for such a setting as the dynamic for it is very different,” said Mr. Folayang when asked by BusinessWorld, during his face-off with Mr. Nguyen early this week at the City Garden Grand Hotel in Makati, for his thoughts on crossover fights.

“I normally fight lightweights and Martin is a natural featherweight so I expect him to be faster and quicker than the fighters in my division. So right now I’m really preparing a specific game plan for him to counter his moves,” Mr. Folayang added.

He went on to say that as the one defending his title, he will try everything he can to emerge on top.

“I intend to defend my division. This is my kingdom so to speak and he belongs in featherweight,” he said.

Like Mr. Folayang, Aussie Nguyen (9-1) also welcomes the crossover fight, viewing it as a good opportunity to highlight some more his skills as a young and talented fighter.

“My body is still young. While I’m in this sport I want to fight as much as possible and enjoy this moment as well as inspire as many people as I can. I didn’t expect it to come this early but I wanted this to happen and I was told it’s going to happen in December in Thailand but I did not know my opponent yet. I thought I was going to fight in December but I’m okay with this schedule as I want to enjoy Christmas with my family,” Mr. Nguyen said in a separate interview.

Mr. Nguyen said he considers beating Mr. Gafurov as the high point of his MMA career so far and is looking to build on it.

“Beating Gafurov has been the pinnacle of my career so far. He was deemed undefeated and they were having a hard time finding an opponent for him. But I stepped up and defeated him. It made it all the more gratifying,” Mr. Nguyen said.

For ONE Championship, doing its first-ever crossover fight is only fitting to be done in the Philippines, considering how fans in the country have been supportive of the organization’s events here since 2012.

“As you know Manila is a big market for mixed martial arts in Asia. ABS-CBN is a good partner for us here. We also have incredible sponsors and the fighters here have improved a lot. This is our first crossover fight and we knew we just have to bring it to the Philippines,” said Loren Mack, ONE vice-president for PR and communications.