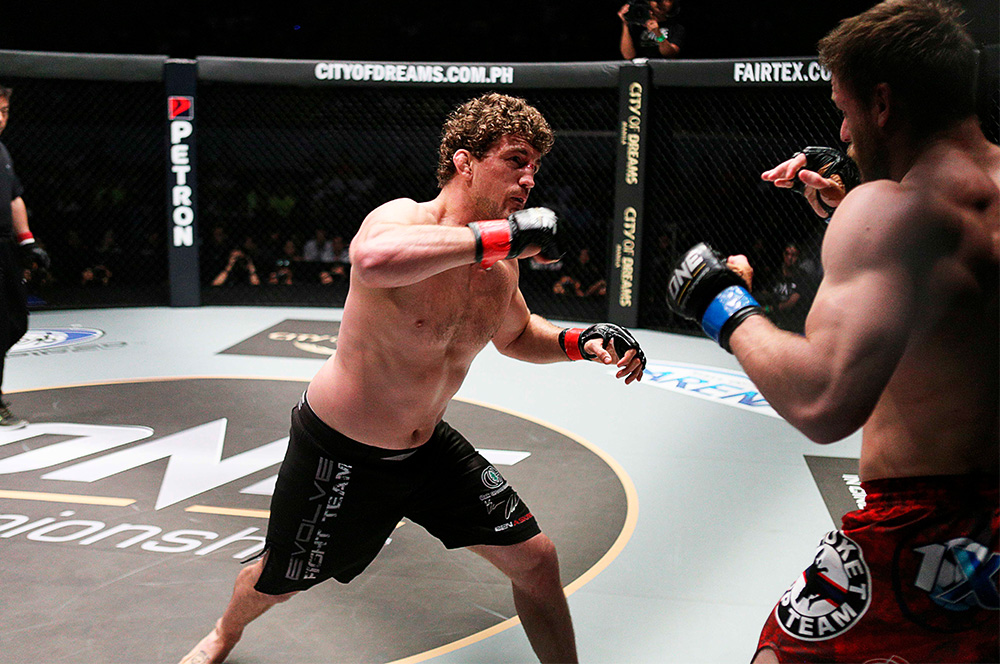 ONE Welterweight World Champion Ben Askren defends his world title against Malaysia’s Agilan Thani at ONE: Dynasty of Heroes May 26, Friday in Singapore.

The unbeaten Askren says his heartbreaking elimination during the 2008 Beijing Summer Olympic Games which shattered his childhood dream fuels his drive to be the best in his sport.

The American split his two matches, losing to Cuba’s Ivan Fundora on points before successfully pinning Hungary’s Istvan Vereb. That loss would be enough to eliminate him from the field. It has left a sour taste in his mouth to this very day.

“The heartbreaking thing about the Olympics is you’ve got to wait four years (for another chance). You do not get another chance next week or next month or next year. You do not have another chance. This is not like fighting, where you know you can bounce back and win a title a couple of months later,” he said.

“The Olympics is every four years, and so losing and knowing that essentially I had put a lifetime of work into that moment, I kind of knew at that point I probably would not have another shot. But even if I did, it will be four years away. That was really hard to swallow.”

Although it clearly frustrated Askren, he was not going to let that loss, or any other loss, break him. If anything, it would drive him. The American is a methodical competitor, and after every rare defeat he has suffered, he analyzes his mistakes, learns from them, and grows as a martial artist.

“I think every loss helps you in some way, shape or form. That loss in the Olympics taught me that maybe I was not reaching far enough on the tactical aspect. There was one move in that match that I was not familiar with. But now that I know it, it is so stupid that I got caught in it. That was what caused me to lose that match,” he said.

Days after that Olympic episode, he went to a pizza joint in Beijing with his now-wife, and decided to act upon his longtime mixed martial arts interest. Askren had always flirted with the idea of competing in the sport, but now he was determined to make a commitment.

Once his mind was made up, he carried over all those years of elite wrestling, and applied them to his new career path.

“I think in fighting, it caused me to really study everything I can study in. Maybe every style is not going to be mine, but I need to have the knowledge of everything that could possibly happen to me inside the cage, and that is an endless amount of possibility,” he said. “So you study this sport as closely as you can so you are well prepared, so you know everything that is coming at you.”

That ideology, and his ability to impose his will upon opponents, has guided him to a perfect 15-0, one No Contest record, as well as the ONE Welterweight World Championship, a title he wears with pride.

Askren is the definition of a champion. He is a dedicated family man with two little girls who is forging his own path in ONE, and helping to mold a new generation of wrestlers at the Askren Wrestling Academy.

He would not have it any other way. He knows firsthand how much wrestling can affect a person’s life positively.

“It is a powerful thing. I remember it happening to me when I was 16. I was not recruited by anybody, and I went to a national tournament and beat a kid who was highly ranked,” said Askren.

“All of a sudden, I am getting a call from everyone. I really remember that moment in time, thinking, ‘I just got my college education paid for.’ I achieved the goal I wanted to achieve. I went to the University of Missouri, I met a bunch of fantastic people there, I met my wife there, and I have kids with that wife. All that, I would never have, if not for wrestling.”