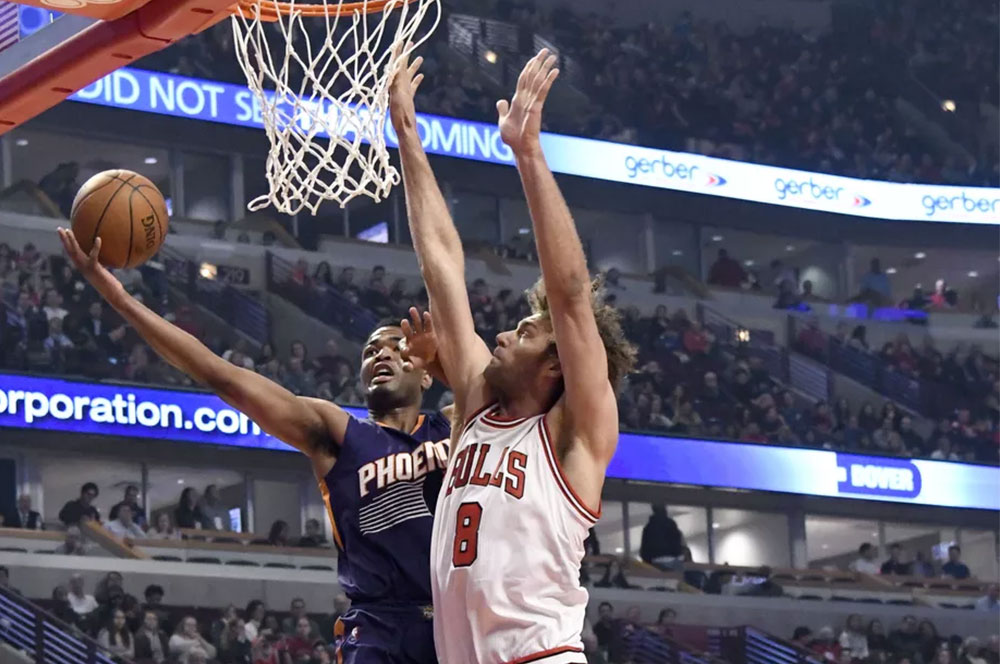 And did so despite one of the most hilariously awful officiating blunders you will see all year.

No Cameron Payne, No King Joffrey, and no Anthony Marrow didn’t matter in the first Bulls game post-Taj Gibson as the Chicago Bulls managed to take down the Phoenix Suns tonight 128-121 in overtime. Many of the usual pillars for the Bulls played poorly until the late stages of the game, and the final seconds of regulation featured the worst call you will see all season.

This game started out slow, with the Bulls falling behind a bit in the opening six minutes thanks to aggressive play from Devin Booker and Marquese Chriss. Chriss and Bobby Portis ended up getting into a bit of a tiff that included both of them receiving technical fouls after Chriss blocked Portis in transition. Then Portis gave Chriss a shoulder-shove a few possessions later after forcing Chriss into a turnover, which prompted the Suns’ lottery pick to lobby for another tech from the refs to no avail. Phoenix would build their lead to 17-10 at one point before the Bulls managed to battle back a bit through Robin Lopez’s interior scoring and hot three-point shooting from Denzel Valentine. The first quarter concluded with a score of 25-24 in favor of the Suns.

As for the other things and stuff that went down, while the Bulls remained competitive for the length of the quarter, they couldn’t put together enough consistent stops on defense to slow down the hot shooting of the Suns. Eric Bledsoe facilitated a potent Suns offense that shot 57.1% in the first half (compared to 43.8% for the Bulls), himself finishing with seven points and six assists through the first 24 minutes. Meanwhile, some undersized girthy scrub named Alan Williams continued his theme from the last time these two teams played of giving the Bulls’ frontcourt fits. He scored eight points in seven minutes off the bench before having to check out of the game with three fouls.

Fortunately, the Bulls shot uncharacteristically well from three in the first half (38.5%), and this combined with solid facilitation from Jimmy Butler and Rajon Rondo (as well as a nice showing from Jerian Grant) allowed the Bulls to stay in the game. However, the difference early on was Dwyane Wade, whom looked lethargic and uninterested for most of the first half on both ends of the floor. Anyway, the Bulls went into the locker room down 54-52.

To no one’s surprise, the Suns came out for the third quarter and promptly went on a 7-1 run over the first two minutes before a Dwyane Wade transition runner stopped the bleeding. Phoenix’s starters continued to punish the Bulls on both ends of the floor by pushing the ball up as often as possible and going full “Jordan Rules” on Jimmy Butler with constant double and triple teams whenever he touched the ball on offense. It worked wonders for keeping Chicago in check, as Butler found himself shooting 3-13 from the field by the end of the quarter.

But not to be out-competed, Denzel Valentine became a human torch and shot 3-4 from three during the quarter to bring the Bulls all the way back from the brink. During the final 30 seconds, the defense forced a stop on the Suns and then Cristiano Felicio got fouled off of a Jimmy Butler miss to give the Bulls a chance to take the lead. Felicio hit one freethrow with .03 seconds remaining to send Chicago to the fourth quarter with an 80-79 lead after looking like the game was about to get away from them.

The initial stage of the fourth quarter remained quite competitive with both teams trading baskets on their way towards 90 points, but the hot shooting the Bulls possessed at the end of the 3rd completely abandoned them as the Suns went on to open up a 102-91 lead midway through the 4th. But towards the end of the game, Nikola Mirotic (after having a very ineffective performance thus far) started to get it going on offense and managed to place the Bulls within a point with about a minute remaining.

After forcing Eric Bledsoe into a loose ball turnover, Jimmy Butler came out of a timeout and hit a stepback three to tie the game at 106-106. On the very next possession, the Bulls forced Bledsoe to commit yet another turnover after Jerian Grant deflected the ball off of his thigh as Bledsoe penetrated beneath the basket. Can you guess what happened next? Jimmy Butler went iso again and hit a fadeaway jumper to give the Bulls the lead with under ten seconds remaining.

Butler, Wade, and Nikola Mirotic all used the OT period to rally from poor offensive performances to score 20+ points each. For Mirotic, it was his first 20 point game since the day after this past Christmas. Robin Lopez added 19 points, serving as the only capable offensive option for certain stretches of this game. Denzel Valentine had one of his best games of the season after learning his role would be expanded, scoring 15 points off the bench and shooting 5-8 from deep (although he hit his first five and missed his last three).

This game was a glass case of emotions. So much to love, so much to hate, but at the end of the day, the Bulls can’t afford to hang their hats on this one for long. They will have to play the Cleveland Cavaliers on the second night of a back-to-back tomorrow night on ESPN Primetime.