Errol Spence Jr. ‘I’m Already Back Down In Weight’

Errol Spence Jr. ‘I’m Already Back Down In Weight’

Errol Spence Jr. ‘I’m Already Back Down In Weight’
Boxing 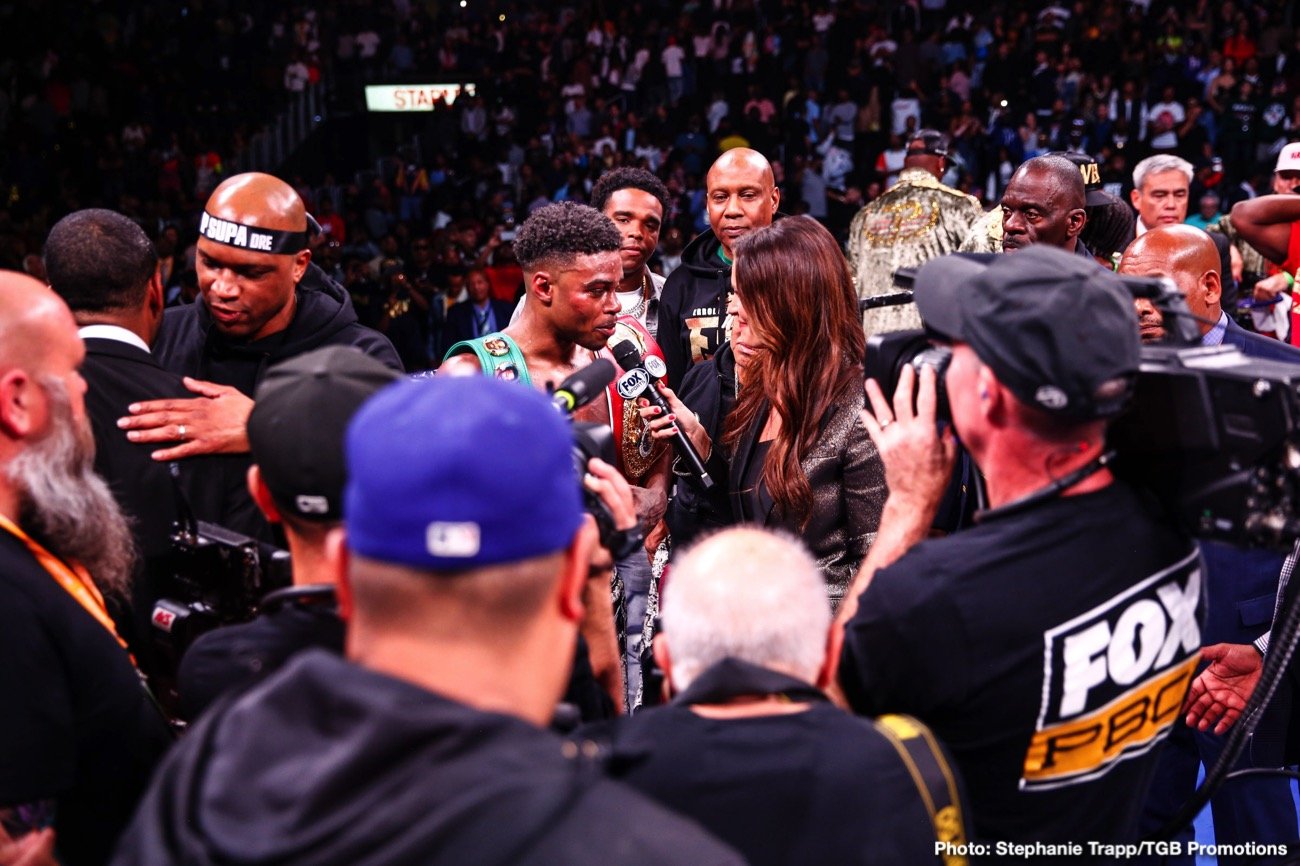 Errol Spence Jr. says he’s got his weight down and he’s ready to restart his career once the lockdown ends. Spence (26-0, 22 KOs) is focused and ready to defend his IBF/WBC welterweight titles against Danny Garcia later this year.

That’s going to be a tough fight for Spence, and he can’t afford to be draining down from 180+ pounds against Danny as he did for the Mikey Garcia match.

A lot of boxing fans have been concerned about Spence’s weight because he looked heavy and puffy a few months ago. Additionally, he’s coming off of car crash that took place last October, and there’s doubt in the eyes of fans whether he’ll be able to come back from that.“I can’t wait to get back into the ring too. I’m already back down in weight,” said Errol Spence on social media.
There are some fans that would like to see Spence take a tune-up before he faces the dangerous puncher Danny Garcia. However, Danny (36-2, 21 KOs) is the equivalent of a tune-up fight for Spence.

If Errol can’t beat a fighter like Garcia, then he has no business talking about wanting to fight Manny Pacquiao and Terence Crawford. Those are guys that are above Danny in talent and overall ability.Danny, 32, won’t give up the ship easily. He’s going to be looking to test Spence’s chin with every left hook shot he throws in the fight. Garcia hasn’t fought a body puncher like Spence, and it should be interesting to see how well he handles getting hit to the midsection.Crawford Fight Needs To Make Sense Money-Wise
“I get my feet wet against the top guys,” said Spence to Brian Custer’s Last Stand Podcast. “We [Terence Crawford] want to fight, but Al Haymon and Bob Arum. I call them the guys in the suits. The guys in the suits want to make sure it makes sense money-wise.

“Little bit,” said Spence when asked if he gets annoyed when he reads stuff on the Internet about people comparing him to Terence Crawford. “Sometimes, I get agitated. It depends on what mood I’m in.“Sometimes I’m, ‘What is this dude talking about?’ Sometimes someone is talking crazy. I don’t watch that at all. If someone has a fair go at me and a fair go at Terence, then I may watch it,” said Spence.

Errol’s adviser Al Haymon and Crawford’s promoter Bob Arum of Top Rank, will need to decide whether it makes sense to make the fight in 2021. Crawford hasn’t shown himself to be a pay-per-view guy during his 12-year career.

A fight between Crawford and Spence might not even do the numbers that the Errol vs. Mikey Garcia fight pulled in. It might be better for Spence to wait until Arum builds up Crawford’s popularity more by putting him in with notable opposition.

The problem is, Crawford has fought the B and C-level fighters his entire career, and he’s not been able to expand his fan base because of that.

Pacquiao = The Match Spence Wants
“I’d say Pacquiao and me fighting in the Philippines,” said Spence when asked what’s the equivalent of Anthony Joshua facing Tyson Fury for the welterweight division.

“Fury-Joshua fighting in the UK would be crazy. Wembley is where they hold 80K, right? They’ll sell that place out with 90K easy for that fight. It’ll be huge with just the talking that Fury does with the way he hypes up the fight and stuff like that.

Manny Pacquiao is unpredictable at this point in his career. He surprised people in choosing Keith Thurman to fight in his last match and may choose to fight someone you least suspect.

Spence wants the Pacquiao fight, but he might not get it. Trainer Freddie Roach said this week that Gennady Golovkin is someone that Manny might fight.

If Pacquiao fights Golovkin, then he won’t bother with Spence. The money will be too good for Manny in a clash against GGG.

If Spence fights Crawford, he would be doing him a favor by giving him a free ride in terms of the fan interest.