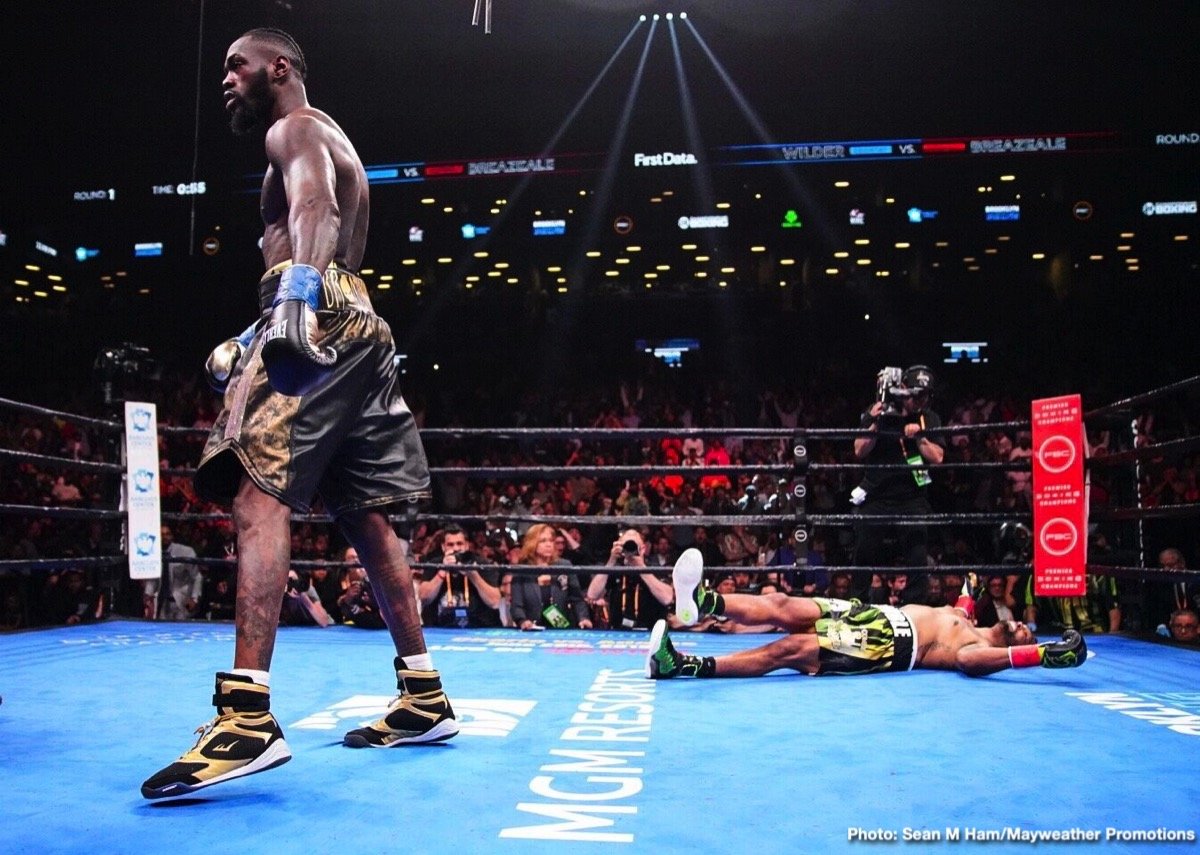 Deontay Wilder (41-0-1, 40 KOs) put on an impressive performance in knocking out Dominic ‘Trouble’ Breazeale (20-2, 18 KOs) in the first round on Saturday night at the Barclays Center in Brooklyn, New York.

Wilder landed a right hand that knocked Breazeale cold. The sound of Wilder’s right hand landing to the head of Breazeale was devastating. It was like a rocket crash landing on the chin of Breazeale.

Breazeale landed on his back on the canvas, and he had both eyes closed. Referee Harvey Dock then gave Breazeale a count. At the count of nine, Breazeale staggered to his feet, but the referee stopped it anyway. The fight was waived off at 2:17 of round one.

When the round started, Wilder landed big shots that backed Breazeale up. Wilder connected with a hard left to the body. Breazeale took a step back. Wilder then connected with a right hand that sent Breazeale back to the ropes. Wilder then threw a series of windmill right hands that only partially connected. Breazeale fired back a right hand to the head of Wilder that wobbled him, causing him to back up a few steps. Breazeale sensed that Wilder was hurt, so he followed him. The two clinched. During the clinch, Breazeale hit Wilder with a punch to the back of the head. The referee then stepped in and broke the two apart. This enabled Wilder to get the perfect distance for him to measure Breazeale for a right hand to knock him out.

After going down, Breazeale laid on his back with both eyes closed and both arms out to his sides. Somehow, Breazeale got himself up off the canvas to try and continue fighting. It was too late though, as the referee looked at how hurt he was and he stopped it right away. Had the referee let the fight continue, Breazeale likely would have been knocked out with the first big right hand shot from Wilder. Breazeale was too groggy looking after he got back. It would have been risky if the referee had let Wilder tee off on Breazeale with him in that kind of condition.

“The power is real, it’s something that I don’t have to really train for,”said Wilder. “I think it will happen. It’s going to happen. I believe in all my heart it will happen,” Wilder said about a unification fight with Anthony Joshua.

Sure, a fight between Wilder and IBF/WBA/WBO champion Joshua (22-0, 21 KOs) can happen, but it’s going to require that AJ and his promoter Eddie Hearn of Matchroom Boxing give Wilder the 50-50 split that he’s been asking for. The offers that Hearn has been making to Wilder and his team has made it clear that they don’t see him as being worth being given an equal deal. That’s why Joshua hasn’t gotten the fight with Wilder, and why he’ll continue not to get a fight with him in the future until they finally agree to meet him halfway.