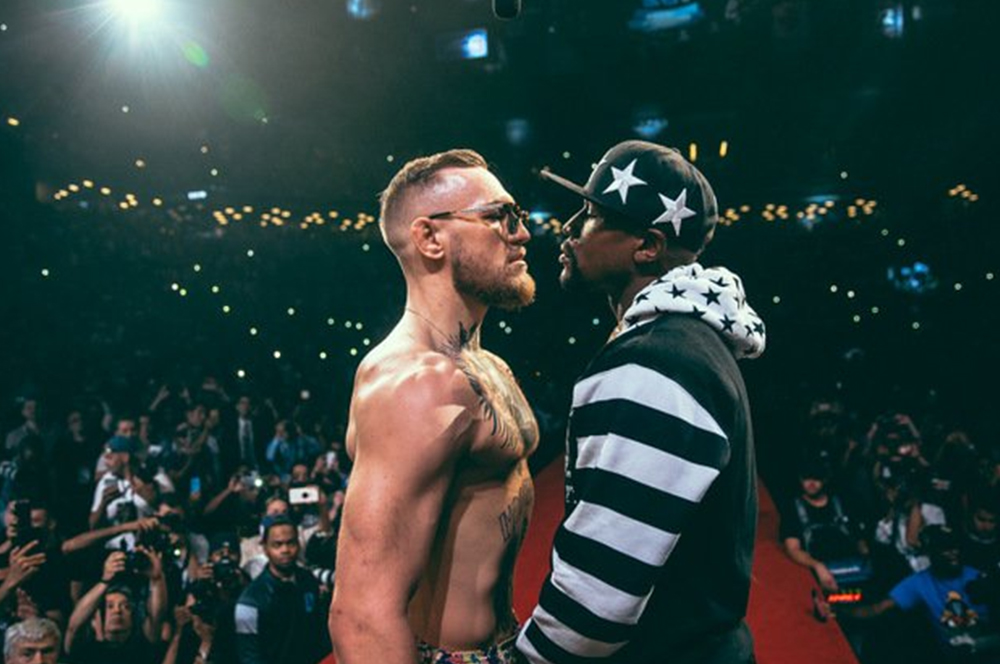 After 8 rounds of sparring with Conor McGregor, Paulie Malignaggi gave an idea what it was like to spar with the 29-year-old UFC champ in preparation for his August 26 fight against boxing superstar Floyd Mayweather Jr. at the T-Mobile Arena in Las Vegas, Nevada.

Sporting a black eye from the sparring session, Malignaggi says McGregor has a good left hand with excellent power. He says he’s got a definite game plan that he’s working on for his fight with the 40-year-old Mayweather. Malignaggi was impressed with the seriousness and the professionalism of McGregor’s camp. He’s taking a scientific approach to preparing for the Mayweather fight. He obviously wants to win the fight badly and not end up looking bad in losing the fight.

“I can’t disclose too much but McGregor is no dummy,” Malignaggi said to NYFights. “There’s a method to his madness. He has an idea of what he wants to do and how he wants to do it, he’s not clueless. He’s not your conventional boxer by any means but he’s capable and his power is good.

There’s very little that McGregor can do that hasn’t already been tried by other fighters. You can come up with every type of approach that McGregor can possibly think of, and it’s obviously been tried by other fighters. If McGregor decides to take the fight to the inside to try and rough Mayweather up, he would be doing what was already tried by Marcos Maidana and Victor Ortiz. I don’t think it’s going to work too well.

One thing that Malignaggi failed to tough on was the weight for the fight. McGregor will need to get down to 154 pounds without draining himself in the process. I’m not sure he can do that. Right now, McGregor looks like he’s in the 170s, possibly the 180s. Some fighters like Saul Canelo Alvarez are very good at draining down from the 170s to make weight at 154, but I don’t know if McGregor is going to be able to do that and still have energy to fight a 12 round fight against Mayweather.

The weight benefits Mayweather to a large degree. Mayweather usually fights at 147. With him having the luxury of fighting McGregor at 154, it’s going to help Mayweather. I don’t know if Mayweather needs more of an advantage than the one he already has for the fight. But having the weight on his side is just going to be one more thing that Mayweather has going for him on August 26.

“He’s going to have his own style and set of things he does. He’s got a game plan. It’s not what people think,” said Malignaggi to ESPN.com. “I’ll put it like this: He knows what he wants to do and he has a method of how he wants to get there. The mechanism of how he gets there may look, to the naked eye, ‘hmm, I don’t know about this.’ He’s a thinker.”

Mcgregor’s thinking skills will be put to a major test by Mayweather, who is a “thinker” as well, and he’s also someone that is able to adapt on the fly. Mayweather doesn’t need to have his trainer tell him what to do at the end of each round like a lot of fighters. Mayweather adapts DURING each round, and that makes thing impossible for his opponents.

McGregor might come into the Mayweather fight with two or three game plans that he shifts through, but Mayweather is going to nullify each one quickly and leave McGregor stuck with nothing to fall back on. McGregor can always go primitive and start trying to rough Mayweather up, but it’s doubtful that the referee working the fight will put up with much of that from the UFC fighter. The referee will know going into the fight that he needs to control McGregor’s roughhouse tactics.

This won’t be a Manny Pacquiao vs. Jeff Horn fight in which the referee let’s Pacquiao get roughed up for 12 rounds without taking points away or disqualifying Horn. McGregor is going to likely have a short leash on August 26 in terms of what he’ll be allowed to get away with. If McGregor gets too physical, he could lose points and eventually get disqualified. With the fight going for $89 and $99 on Showtime pay-per-view, I’m not sure if the referee would go so far as to disqualify McGregor for fouling Mayweather. It depends on how much fouling McGregor does in the fight.

If he goes full MMA on Mayweather by kneeing, kicking, elbowing, and body slamming, then it’s quite possible we’ll see an early exit for McGregor. There will be a lot of angry boxing and MMA fans if McGregor gets disqualified, but he would have brought it upon himself. McGregor obviously knows what he’s doing inside the ring. If McGregor decides it’s better to get out of the fight by being disqualified rather than being knocked out or humiliated by Mayweather, then we could see him pressing the referee’s buttons to get him to pull the plug on the fight. I’m hoping McGregor doesn’t go that route, but it’s definitely a possibility.

”Conor being known for the left hand is just one weapon,” said Malignaggi to Top and Sports HQ. ”There’s got to be other things that he needs to make you worry about and that’s what’s kind of being worked on in camp and whatnot. And, you know, without giving away too much he’s effective at what he’s doing, there’s thinking behind it.”

McGregor has the option of trying to fight Mayweather on the outside or take it to the inside. The fact that McGregor has already mentioned wanting to “maul” Mayweather, it suggests that’s the likely plan for the fight. UFC fighters tend to trap their opponents against the cage in their fights and work them over with short punches to the head and body. They lean on their opponents to and grapple to keep them from being able to get their shots off.

McGregor tends to try and keep things in the center of the octagon due to excellent striking skills. He doesn’t need to resort to mauling his opponents, but he knows how to do all that though if need be. McGregor is likely going to try and fight Mayweather from the outside initially to see how well he stacks up against him in that type of fighting. But if things aren’t working out for him, he’s probably going to take it to the inside and attempt to make it rough fight.

“He’s got some pop in the left hand,” said Malignaggi about McGregor. ”I think in boxing, especially against a guy like Mayweather, you probably need to devise a few more weapons and that’s what Conor’s working on. I think you come into the situation already knowing Conor has a big left hand. So if you’re fighting Conor you’re probably going to prepare for that left hand. So obviously Conor’s working on other things besides the left hand so that there can be a surprise element to it too.”

Mayweather isn’t going to take too many chances of getting hit by McGregor’s left hand if he’s fast enough to land it. McGregor has fair hand speed, but it’s not at the level of Saul Canelo Alvarez, Manny Pacquiao and Zab Judah. Mayweather dealt with their hand speed with easy by using his jab and single pot shots. They weren’t able to touch Mayweather with any regularity.

If McGregor can’t tough Mayweather with his left hand shots, which is pretty much his only true weapon, then this fight could turn out to be as boring to watch as Mayweather’s fight against Pacquiao back in 2015. There won’t be any negative fallout for Mayweather, because he’ll go back into retirement with his 9-figure payday. But for boxing, I think it’s going to hurt the PPV model for some time to come.

Top Rank will be OK, because they’re doing free boxing on ESPN, but guys like Canelo will likely be hurt to some extent unless he steps it up and faces only the best from this point on. Hopefully, Mayweather takes some risks to make it an exciting fight against McGregor. He owes it to himself and to the many fans that are purchasing the fight for him to make it an exciting fight.