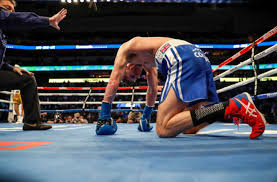 Luke Campbell is still blown away by his devasting loss to Ryan Garcia last Saturday night. Campbell (20-4, 16 KOs) came so close to defeating the American in the second round, but he let him off the hook.

Campbell, 33, is still trying to come to terms with the realization that he could have won the fight, but he failed to jump on the 22-year-old new kid on the block Ryan after knocking him senseless in the second round.

Luke says Ryan was essentially knocked out from the left hand he dropped him with in the second. It was the impact of Ryan hitting the canvas that woke him up, says Campbell.

The strange part was Ryan was able to instantly recover from the brutal knockdown and come back to fight effectively. Campbell found that difficult to understand how Ryan could back from what had happened to him.

“I’m a little heartbroken obviously. It’s a real bitter pill to swallow when you’re losing,” said Campbell to IFL TV. “I’m used to winning, and I’ve got that winning mentality.
“So when you lose, it’s hard to swallow, what can I say. But it was a fantastic fight up until round seven. That’s never happened to me before, and I guess the better man won on the night. It was a fantastic shot. I couldn’t recover from it.
“Yeah, being honest, yeah,” said Campbell when asked if Ryan Garcia was better than he thought he was. “I honestly thought that once I started hitting him, he would want out, and that took me by surprise a little bit as well.

“And I hit him with a fantastic shot on the button, and his eyes were closed on the way down,” said Campbell about his second-round knockdown of Ryan.
“I think it was the actual hit on the ground that woke him up.

“But he was up in seconds, and he was recovered like that, which really shocked me. When he got back up, he seemed to recover straight away,” Campbell said.

Initially, it looked like Campbell would be too much for Ryan in the first two rounds after he dropped him in the second.
If Campbell had continued to nail Ryan with repeated left hands in rounds three through seven, he might have won. It looked like once Campbell started to feel Ryan’s power in the third, he played it safe from the outside.

As the B-side, Campbell was never going to win that kind of a fight against a popular star like Ryan. Campbell was fighting like he thought he would win a decision, and that wasn’t going to happen.
“I wanted to go in and try and get the job done straight then straight away, but I thought, ‘He’s back,'” said Campbell.
“You know when someone is not there with it. I thought, ‘He’s back. If I come rushing in, I’m going to get caught on the way in.’ So I thought I’d just continue to pick my shots and be careful instead of just going in winging in and get caught myself.

“Like I say, he was instantly recovered from it where you know you get up and you might still have shaky legs and still not with it. I felt that ‘He seems like he’s back.’

“So I thought, I’m not going to go in there rushing like a fool because I’ll get hit myself. So I felt like I’d continue picking nice shots, and we’ll catch him again,” said Campbell.

In hindsight, Campbell blew what little chance he had of winning the bout by not taking the risk of trying to force a knockout in the second.
It’s easy to second-guess Campbell’s fight strategy now, but it still made sense for him to have gone for the KO when he had Ryan badly hurt.
“I’ve not watched the fight back to try and look at myself,” said Luke. “I felt like I was coming and dishing it back. And I thought I was catching him with clean shots and a lot of the stuff he was throwing, I was blocking and moving.
“I thought the fight, there was nothing in the fight up until that point. Well, we all know his left hook is his best shot, and he was throwing it to the head, and I was blocking it well.

“Then I could see there I was stood, and as I moved, I thought he was throwing it to the head, he just whipped it and lifted up my ribcage, and I stood back and I couldn’t get my breath.

“Listen, everyone has different attributes in what they bring,” said Campbell in reacting to Ryan Garcia asking him if he was the most powerful puncher he’d faced.

Campbell tried hard to get up after getting hit with the left to the body in the second, but he couldn’t do it.

Going into the fight, there was footage of Canelo Alvarez working with Ryan on throwing his left to the body.

If Campbell had paid attention to the video, he’d have been aware that Ryan would hit him with sneaky body shots.
“If they have less power than someone else, they may accelerate in different areas than they would,” said Campbell in talking about Ryan’s punching power.
“He has power in both hands in every shot where someone else might just have power in one shot like one straight right hand they might carry that power in and everything else sets it up for that right hand.

“He was very quick and had power in both hands,” said ‘Cool Hand’ Luke.

“For me to win, I would have had to knock him out to win,” said Campbell. “I didn’t think it would necessarily like it, but it would have been more fair on the scorecards.

“The scorecards, what I got told, was stupid because for me, it was very competitive fight. There was nothing much in the fight between us both up until that point.

“But some of the scorecards, the reading was so biased that it was unreal. I look at it now that it was probably a lose-lose for me anyhow because if I beat him, which If I would have been gotten a points decision anyhow, not with their scorecards.

“So I would have had to knock him out to be him. If I’d knocked him out, ‘Ah, you beat an Instagram star.’ I wouldn’t have got the credit that I deserve because I’d have just beaten an Instagram boxer.
“But obviously, him winning, I’ve lost anyhow. I don’t think there was a win-win that for me whatsoever,” said Campbell.

The judges scored the Garcia vs. Campbell fight as follows:

58-56
58-55
58-55
Those were fair scores, give that the only round that Luke appeared to win was the second. Ryan landed the harder, cleaner shots in rounds 1, 3, 4, 5, 6 and 7
“I think he beats [Devin] Haney,” said Campbell. “Gervonta, I think you’re always going to have a hard fight with Gervonta. But I believe he’s got the tools to beat him. I think he beats Haney.