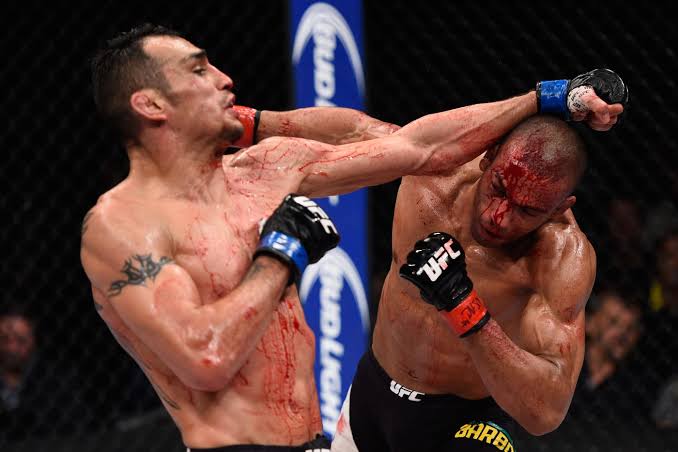 It’s no surprise, given their long tenures inside the UFC’s lightweight division, that Tony Ferguson and Khabib Nurmagomedov would have a few opponents in common. Gleison Tibau, Michael Johnson, Rafael dos Anjos, and even Abel Trujillo have all fought both men. Notable as well, among that select group, is longtime lightweight action standout Edson Barboza.

Barboza fought Nurmagomedov back in December of 2017, at UFC 219, losing the bout by unanimous decision. Two years before that, however, he was on the wrong end of a D’Arce choke—slapped on by none other than ‘El Cucuy’ at the Ultimate Fighter 22 Season Finale. It’s a history that gives him a pretty solid view of what both men are capable of inside the Octagon. And he recently spoke to MMA reporter Helen Yee to give his read on the upcoming lightweight title bout.

When asked more specifically, who he thought had the advantage, the American Top Team fighter ultimately landed on Ferguson and his creativity.

Barboza did admit, however, that he thinks Khabib is the more powerful fighter, “especially on the ground.” Ultimately, the match-up should lead to a thrilling contest no matter which way it goes.

Barboza himself last fought in September of 2019, where he took a hard split decision loss to Paul Felder, in a rematch of their 2015 battle. The loss was Barboza’s second straight, coming on the heels of a KO to Justin Gaethje in March of that same year. No word yet on when he might be returning to the Octagon, but when he does, Barboza will be looking to do so at 145 lbs.

“I feel I need some new motivation,” Barboza said, recounting his long history at 155 in the UFC. “I think right now, the best choice for me is to drop for 145. Try this new division. It definitely put something inside; motivates me to come here, train every day. I’m very excited for the new challenges.”

UFC 249 takes place on Apil 18th, in Brooklyn, NY. The event is expected to be headlined by the Nurmagomedov/Ferguson lightweight title fight. A women’s strawweight rematch between former champions Jessica ANdrade and Rose Namajunas has been set for the card as well.