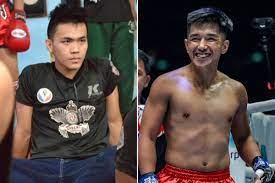 While his run was cut short, Christian Paul Laurio’s time at the ONE Warrior Series Philippines will be an experience he’d carry on for a lifetime.

Laurio was the first fighter eliminated from the show following a tough elimination process that Team Lakay patriarch Mark Sangiao did along with coaches Joshua Pacio and Geje Eustaquio of Team Passion and Team Gravity, respectively. Former ONE Bantamweight World Champion Kevin Belingon, who was a guest coach in the first episode, also helped in the deliberation.

The 24-year-old from Quezon City was pitted against Anacleto “L.A.” Lauron in a sparring match at the end of the first episode. A skilled striker, Laurio was eventually outdone on the ground tapping out to Lauron’s D’Arce choke in the first round.

Despite his exit, Laurio knows that he will bounce back and work on becoming a better mixed martial artist along the way.

“Of course, I’m sad first of all. I will miss my teammates,” said the Team Gravity fighter. “Coach [Geje] told me that my journey doesn’t end here, more opportunities will come. You have to keep on improving on what you started.”

“I want to encourage my teammates to continue fighting, carry on and welcome every opportunity.”

Laurio had a tough road in the first episode losing to JM Guntayon in his Bultong match, an Igorot-style wrestling martial art.

His lackluster performance against Lauron in the sparring match also exposed his weakness on the ground.

Laurio, a former member of the Philippine National Muay Thai Team, was aggressive at the start of the match but his fast-paced attack led to a scramble on the mat—an area that Lauron had the advantage on.

Sangiao, who’s guided five ONE world champions, was honest in his assessment of Laurio. The Team Lakay founder, however, still offered valuable encouragement for the 24-year-old striker.

“So Christian, your elimination does not mean it’s over. Continue what you want to do. You have a good future and you will be successful,” said Sangiao. “We decided to eliminate Christian Paul. He’s very strong but for me, he lacks experience.”