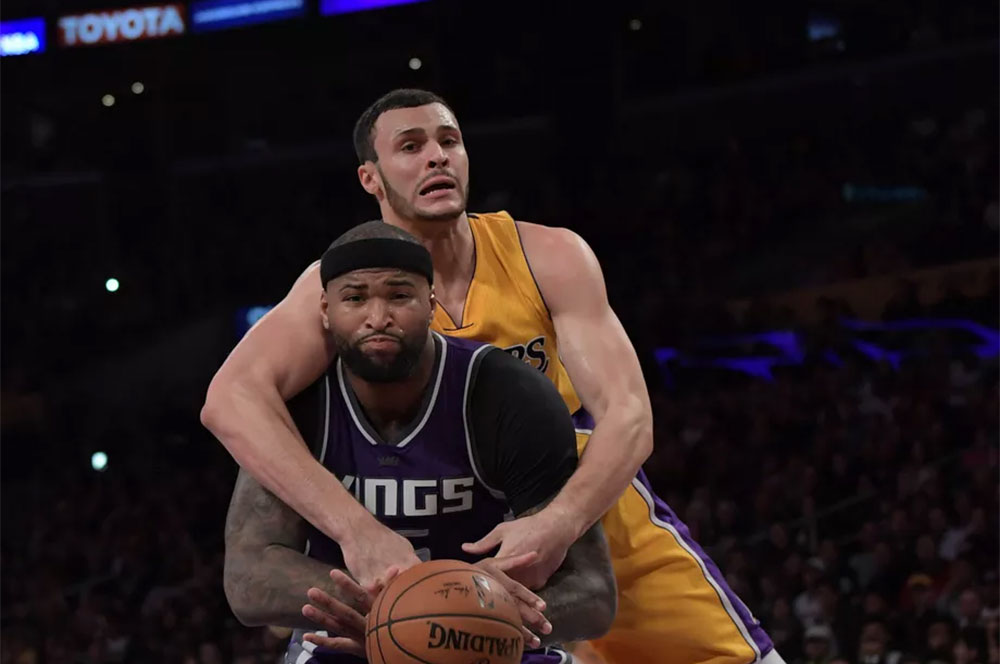 DeMarcus Cousins was way too much for the Lakers to handle and the Kings overcame some hot shooting by Lou Williams to win their fourth in a row.

Nothing comes easy for this Kings team.

Despite carrying a double-digit lead in the fourth quarter, the Kings yet again managed to have a game go down to the wire. Fortunately for Sacramento, the Lakers had absolutely no answer for DeMarcus Cousins (40 points, 12 rebounds, 8 assists) and Lou Williams’ long three at the buzzer was off, giving the Kings their fourth win in a row.

It wasn’t the prettiest game to watch, as both teams played sloppy for a large part of the game. Both teams had 17 turnovers and there were large stretches of the game where both teams simply couldn’t buy a bucket.

Sacramento’s bench, which has been doing so well this season, had one of their worst nights in a long time. The Lakers’ bench outscored Sacramento’s 54 to 17, led by Lou Williams 29 points. The Kings were once again without Ty Lawson which forced Darren Collison to play 40 minutes once again and the lineups which featured no Collison struggled against the Lakers’ quicker guards.

The starters really came through for the Kings though, particularly DeMarcus Cousins. Luke Walton didn’t seem to want to employ double-teams on Cousins and as a result he had free rein to do pretty much whatever he wanted in the paint. He got to the line a whopping 19 times, but rather uncharacteristically only made 12. Every other starter aside from Kosta Koufos scored in double digits for the Kings. Ben McLemore continued to showcase his renewed confidence and shooting stroke, scoring 13 points including 3-5 from beyond the arc. Collison wasn’t as aggressive with his shot as he has been in previous games but he still managed to score 13 points and dish out 8 assists. Arron Afflalo added 10 points, mostly utilizing his size in the post.

The Kings were never able to build any sort of substantial breathing room against the Lakers. They would consistently build the lead up to a few possessions only to allow the Lakers to come storming back before the process would repeat itself. It really started to seem like the Kings were going to blow the game open in the fourth quarter when they opened up a 13 point lead on Los Angeles but Lou Williams came in and caught fire. Williams hit shot after shot and with Cousins on the bench resting, the Kings simply couldn’t find anyone to answer back. After Williams hit a 3 pointer to tie the game up, Coach Joerger had seen enough and put Cousins back in. Immediately the bleeding stopped as the Kings went to Cousins again and again and seemingly each time got results. Williams was still hot though and the Lakers kept it close the whole way.

One particular mistake by the Kings almost proved disastrous. With about 3 minutes left in the game, Sacramento did an excellent job defending L.A. and forced Tarik Black (who has never hit a three pointer in the NBA, D-League or four years of college) to have to shoot a three pointer as the shot clock expired. Black’s attempt would’ve been short, but Cousins, anticipating a rebound, touched the ball before it hit the rim, resulting in a goaltend and three points for the Lakers.

With 30 seconds left and the Lakers down three, Williams crossed up Collison and the Kings’ guard slipped. Williams took the opportunity to rise up and hit another three, tying the game at 96. On the ensuing possession for Sacramento, Darren Collison got open for a catch and shoot three at the top of the arc but it went in and out. Cousins was in the vicinity however and grabbed the offensive rebound through a couple of Lakers. His putback attempt didn’t go in but he was sent to the line where he made the first free throw but missed the second. That sort of worked out for the Kings, as the Lakers almost certainly would have called timeout if he had made both of them. Instead, Lou Williams decided to take the ball up the court with about 6 seconds left and despite only needing a two to win the game, chose to rise up for a 28 foot contested three pointer (it seriously boggles me how often NBA players take terrible shots in these kind of clutch situations) that badly missed.

The Kings escaped with the victory and now have to face an angry Warriors team tomorrow that just got pasted by the Denver Nuggets and probably are still upset that the Kings beat them up in Sacramento not too long ago. Sacramento also moved a half game ahead of the Portland Trail Blazers in the standings and are now a game and a half behind the Denver Nuggets for the 8th seed.