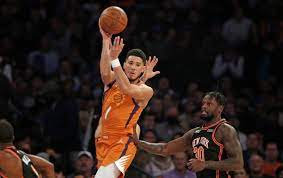 Chris Paul had 14 points and 10 assists for the Suns, who improved to 16-3. The reigning Western Conference champions will try to wrap up a perfect four-game trip Saturday in a showdown with East-leading Brooklyn.

Phoenix also won 15 straight during the 2006-07 season. The Suns won a franchise-best 17 in a row later that season.

Deandre Ayton finished with 14 points and 13 rebounds. Booker was 14 for 27 from the field, making four 3-pointers. He did not attempt a free throw.

The Suns had to work hard to pull out victories in San Antonio and Cleveland to start the trip, but were in control most of the way at Madison Square Garden. They were ahead for the final three quarters and led by as much as 24 points.