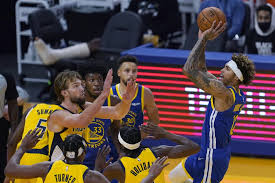 Edmond Sumner earned a start for Indiana that came with a daunting assignment: defending Stephen Curry.

Myles Turner made a go-ahead 3-pointer with 2:59 left and scored 22 points, Aaron Holiday converted a layup on the next possession and the Pacers held off Curry and the Golden State Warriors 104-95 Tuesday night.

Indiana kept Curry in check by regularly playing him with a tough box-and-1 defense, though the two-time MVP still created his chances. He found his groove again following a rare off night Sunday against the Raptors to finish with 20 points.

“People are going to throw everything at Steph,” Warriors coach Steve Kerr said. “That’ll be a big theme this season and we’ve got to do a better job of attacking what people are throwing at us, and we’ll get better at it.”

Justin Holiday also hit a key 3 late as the Pacers bounced back from a loss at Sacramento a night earlier to avoid dropping consecutive road games for the first time.
Curry shot 7 for 17 with three 3-pointers.

“They were mad from last night and they came today with an edge to them,” he said.

Curry was coming off an 11-point game in which he shot 2 for 16 and missed nine of his 10 3s in Sunday’s win against Toronto after scoring 143 over his previous four games, including a career-high 62 a week before against Portland.

Andrew Wiggins scored 22 points as the Warriors concluded a seven-game homestand, their longest of the season, by going 4-3 at Chase Center in a span of 12 days.

Wiggins also blocked a career-best five shots, giving him nine the past two games — the first time in his career he has had three or more blocks in back-to-back games.

Turner had 11 rebounds and four blocks for the Pacers, playing a back-to-back following a 127-122 loss to the Kings that began a five-game road trip out West. Four players scored 20 or more points in that game, then five reached double digits Tuesday.

Golden State rookie James Wiseman picked up his fourth personal foul with 1:10 left in the second quarter. He played in the third until getting his sixth foul at the 6:25 mark.

The Warriors honored front-line workers on “ Essential Workers Night, ” with those fans watching virtually and being shown on the LED boards.

Golden State forward Eric Paschall sat out and entered the NBA’s COVID-19 health and safety protocol. That does not mean he has tested positive for the coronavirus.

“We’ve got to make up for Eric’s loss and it’s a big loss with the way he’s been playing,” Kerr said.

Curry’s injured Splash Brother, Klay Thompson, has been around the team the past couple of days, seeing the training staff Tuesday as he recovers from surgery on a torn right Achilles tendon. He is unlikely to travel with the club for now.

Thompson is still in a boot but will begin running in a pool next week.

“He’s in good spirits,” Kerr said. “He’s very upbeat about everything. It was great to see him.”

Pacers: Shot 9 for 28 from 3-point range. ... Indiana won on the Warriors’ home floor in the lone meeting last season and scored its most points ever in the series in a 129-118 victory.

Warriors: Curry missed his first two free throws of the game, rattling each one in and out, and shook his head in disbelief after the first one didn’t drop. He had made a franchise-record 80 straight from the line before a miss Jan. 3 vs. Portland.