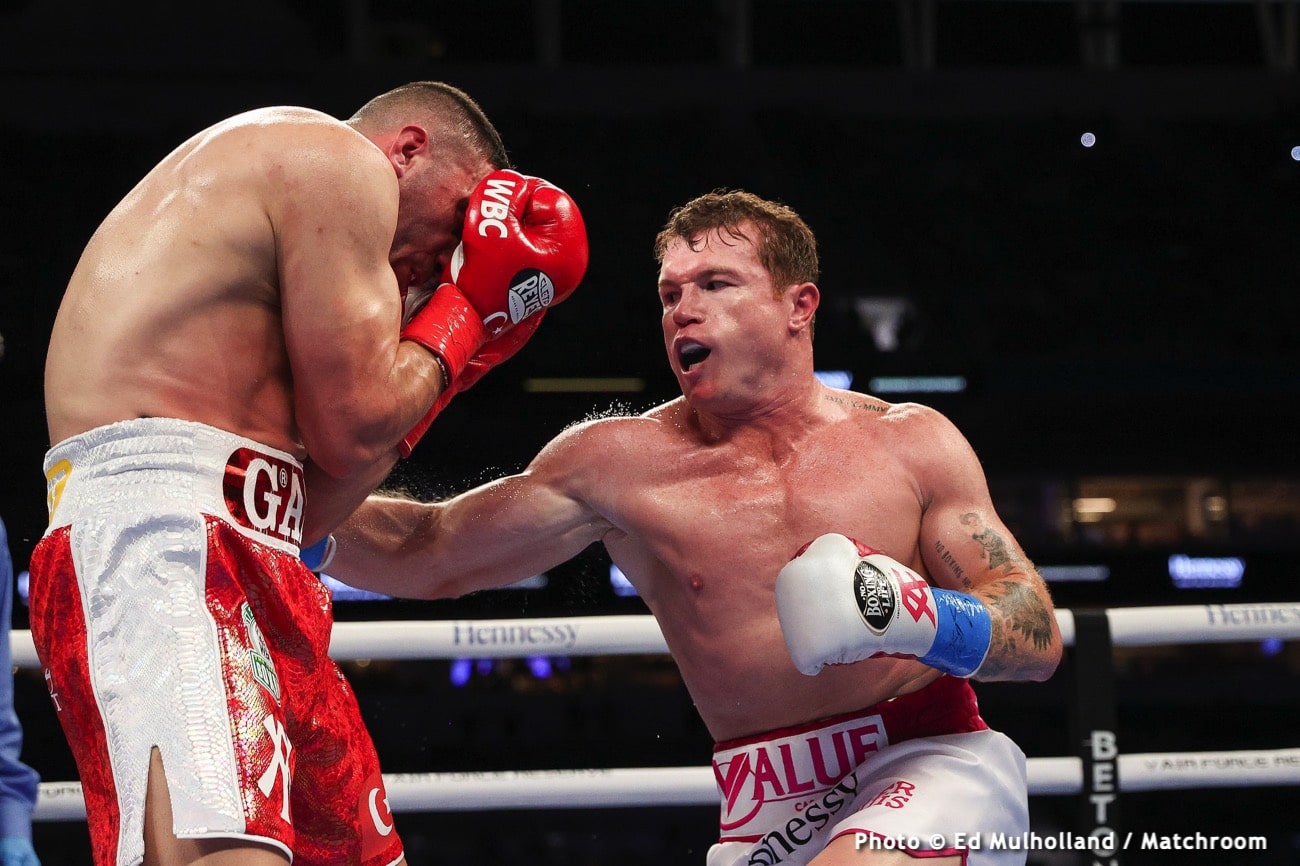 Tim Bradley says the huge improvements that Canelo Alvarez has made in his stamina in a short period is a red flag, and he suspects something is up with that.

The popular former two-division world champion Bradley feels that it’s odd that Canelo (56-1-2, 38 KOs) isn’t fading as he used to a short time ago.

Canelo faces Caleb Plant next on November 6th in an undisputed clash at 168, and Bradley wants to see how Alvarez’s stamina looks in that fight.

Whatever Canelo and his trainer Eddy Reynoso have done to fix the stamina problem, it’s a huge improvement.

We’ll have to see if Canelo can continue to perform well late in his fights when he takes on Plant on November 6th.

Plant will be vulnerable if he gasses out in the later rounds against Canelo because the Mexican star will be walking him down.

Bradley Suspicious Of Canelo
“Canelo used to get tired. I’m telling you, he used to get tired, and that’s a guy with 40-something fights at the time,” said Tim Bradley to Fighthype on Alvarez’s stamina problems over the years.

“In the Danny Jacobs fight, he got tired a couple beforehand. I know that was some time ago, a few years ago, but he would get tired in the second half.

“In the first GGG fight, he got tired, but then all of a sudden, he was walking guys down, and this guy [Canelo] is not getting tired anymore.

“This guy is knocking guys out now, breaking faces, and it raises a flag. That’s all I can tell you,” said Bradley about Alvarez.

“I wouldn’t say that he is, but I’m just saying. And I think that the facts are there, and these are the fighters. I think it’s kind of odd. We’ll see in the Caleb Plant fight,” said Bradley about Canelo’s stamina issues have disappeared.

We don’t know what Canelo has done to improve his conditioning since 2019. Canelo didn’t show any signs of fatigue in these fights:

“Andre Ward is definitely going to help give him a really good game plan and tighten up some of the areas that he’s weak at.

“I’ve seen a lot of the flaws [with Plant] that Andre sees for sure. Plant will have a better chance of beating Canelo if he tightens up certain areas.

“Defensive flaws. It’s more defensive. I see him get hit with right hands quite often. He drops his hands quite a bit, and he likes to hang out along the ropes sometimes.

“How to deal with pressure [Jose] Uzcategui was pressuring him and getting to him in the second half of the fight.

Andre Ward used to be a good fighter during his career, but with his ideas for Plant, he likely won’t find success. Look at it this way. If Plant stays on the outside, playing it safe and jabbing all night, the judges will give it to Canelo.

The only way the judges will give Plant a victory is if he goes to war with Canelo and out-punches him. Plant isn’t that kind of a puncher, and he’ll get knocked out if he even tries to slug with Canelo.

Canelo Will Come On In The Second Half
“He [Plant] better be in the best shape of his life because in the second half of the fight is when Canelo is going to come on,” Bradley said in predicting that Alvarez will surge in the later rounds.

“He’s going to come on strong, and that’s where those little technical things where Plant is lacking with his defense are going to come into effect. So work on the second half of the fight.

“In the first half, I think Plant will be alright. He’s quick. He’s a great mover, a good thinker.

“He gets off, he feints a lot, and he does a lot of great things that can offset Canelo and his game, but the second half is where he’s going to need [help],” Bradley said of Plant.

“Yeah, Canelo is definitely going to try and break him down to the body, looking for that left hook, and try to feint him and get him out of position, and look for the overhand right,” said Bradley.

“That’s the punch I see landing a lot, that overhand for Canelo. That’s an area that Dre is definitely going to tighten up as well,” said Tim about Ward working with Plant.

Canelo knows better than to expend energy early against Plant because he’s not capable of matching his work rate, and he’d run into problems if his energy stores dip in the later rounds.

That’s why it’s a given that Canelo will wait until the seventh round before he goes on the attack, and he’s got an excellent chance of scoring a knockout against Plant.

Bradley can talk about Plant improving as a fighter with the help of Andre Ward, but it doesn’t seem possible. Plant would need to improve dramatically to have a chance of beating Canelo, and he’s not going to make those improvements in an eight-week camp.

Caleb Needs To Train For Stamina
“If he does those things, he has a better chance of beating him, but how do you work on the back end? Start swimming,” Bradley continued about Plant.

“Incorporate at least one swim day where you’re going back and forth, doing laps, and exercising in the pool.

“Another way to get that endurance is to train before you spar. That’s normal because you want to have all your energy when you spar.

“But if you flip-flop it and train first, then you get in the ring. Now you got to really think.

“Now you really got to be on your A-game, and that’s how you work on the back end of your fights. That’ll help him. I’m glad Ward is helping him [Plant] out.

“I’ve been studying Plant. He puts his combinations together very, very well, and he doesn’t telegraph his punches.

“That’s awesome. That’s hard. A lot of guys will load up and telegraph like when they throw the jab.

“They’ll cock it and then shoot. When his punches come out, they’re smooth. They’re sharp and crip and got some pop on it.

“So, I give him a very good chance of beating Canelo, but the second half of where things are going to heat up for him. He’d better be ready physically and mentally,” said Bradley about Plant.

Plant will have to do something fast to build up his conditioning for the November 6th fight because Canelo is going to turn up the heat on him the way he did with Billy Joe Saunders.

If Plant fades after six rounds the way Billy Joe did in his fight with Alvarez on May 8th, he’s going to get knocked out. It’s not as if Plant hasn’t faded before, as we saw him gas out in the last six rounds of his fight with Jose Uzcategui in 2019.

That was the first and only time in Plant’s career in which he fought a decent quality guy. The rest of Plant’s rest is filled with beatable guys like Vincent Feigenbutz, Caleb Truax, and Rogelio Medina.