Where the hell is Raul Jr?

"The key is to keep company only with people who uplift you, whose presence calls forth your best."
--Epictetus

NEW YORK CITY -- It looks like the widow of the late justice secretary Raul M. Gonzalez Sr. will have to comb Iloilo City's 180 barangays alone by her lonesome self to woo the Ilonggos' votes when the campaign for the local positions in the May Philippine elections officially begins. 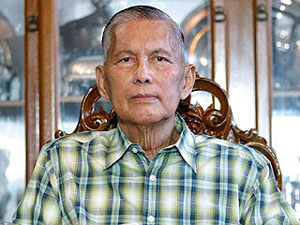 "The key is to keep company only with people who uplift you, whose presence calls forth your best."
--Epictetus

NEW YORK CITY -- It looks like the widow of the late justice secretary Raul M. Gonzalez Sr. will have to comb Iloilo City's 180 barangays alone by her lonesome self to woo the Ilonggos' votes when the campaign for the local positions in the May Philippine elections officially begins.

This will only happen if Dr. Pacita Gonzalez can't iron out the kinks with her running mates, Councilors Joshua Alim and Plaridel Nava, on time with barely two weeks before the campaign sorties hit fever-pitch.
They have been known as the triumvirate of AlGoNa: Alim for congressman in the city's lone district; Gonzalez for city mayor; and Nava for vice mayor.
Eight candidates are running for city council under their opposition ticket.

AlGoNa reportedly suffered an ugly dent recently when Alim and Nava rejected Dr. Gonzalez's order to kick out barangay leaders who appeared to have cast their lot only for Alim and Nava but not Dr. Gonzalez.
Most of these barangay leaders apparently have already committed to support either Mayor Jose "Joe III" Espinosa III or Rep. Geronimo "Jerry" Trenas, who are both Dr. Gonzalez's rivals.
Dr. Gold, daughter of Dr. Gonzalez, probably sensed something unusual with the way the barangay leaders behaved when they faced them, and during background checks; she didn't want her mother to look like a carpetbagger and a fool.
The daughter Gonzalez was aware her mom was willing to shell out the campaign kitty's biggest chunk for the entire bets in the team, thus they wanted to make sure they were investing for the right barangay leaders, not spies and "double croppers".
In a tit for a tat, Nava also probably didn't like the way Dr. Gold's thinking was trying to influence her mom's decision-making.
Nava scored Dr. Gold's "paranoia" and "political immaturity."
He and Alim refused to abandon the barangay leaders during the "crucial" moment.

Dr. Gonzalez has lagged behind in the most recent "surveys" even before the purported split with Alim and Nava occurred.
But it seemed like Dr. Gonzalez's fate was sealed from the very start.
Before she announced her candidacy and agreed to tandem with the two lawyers third quarter in 2018, Espinosa and Trenas have already secured in the bag the commitment of most barangay leaders.
The tug-of-war and backdoor maneuvering started before and after the barangay elections two years earlier.
In other words, most barangay leaders may have already been "well taken care of" by both Espinosa and Trenas and, most likely, left nothing for Dr. Gonzalez but the crumbs if not the spoils.
Alim and Nava must've managed to "squeeze in" and secured the commitment of other barangay leaders because they have been in the league for quite some time; as incumbent councilors they have built-in bulwarks.

And the most telling, and, perhaps, the deafening hiss and gnawing bewilderment in the campaign conversation that has not been openly blurted out is, where the hell is former Rep. Raul Gonzalez Jr. amid all this hullabaloo?
Their mommy Pacita's campaign management has been wounded in the capillaries, and Raul Jr. has not surfaced to help stop the hemorrhage.
Instead, it seems he allowed inexperienced and neophyte sister Gold to take the driver's seat in a rough ride he alone, based in his experience as a former congressman, has the capability and expertise to tackle.
Is it possible that before any internal wrangling had swept through the AlGoNa bandwagon, a more catastrophic internal rift was already boiling within the Gonzalez family over the matriarch's insistence to join in the May elections?