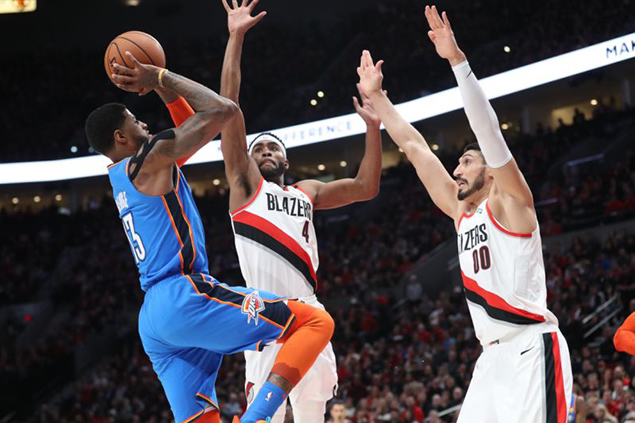 Charles Barkley made an observation at halftime of Game 4 between the Thunder and Trail Blazers. In short, the message was rather flattering for Damian Lillard but not for Russell Westbrook.

By translating that message, Barkley was pointing out that Lillard is trying to compete with his team against the Thunder while Westbrook was merely just playing against Lillard. In other words, Westbrook is playing hero ball.

Barkley has been known to have some rather outlandish opinions at times but his observation on Westbrook felt especially true after the Thunder dropped a 111-98 decision in Game 4 on Sunday night.

Tempers flared between the two teams on Friday night as the Thunder took Game 3 at home. Westbrook had plenty of trash-talk for Lillard in that outing, Paul George had a lapse of judgment as time expired and Dennis Schroder mocked Lillard. But, for a team that had been mostly dominated to that point of the series, the Thunder may have prematurely started feeling themselves.

The Trail Blazers put the Thunder back in their place on Sunday.

Oklahoma City held a seven-point lead with 2:31 left in the second quarter but the Trail Blazers quickly ended the first half on an 11-0 run to take a four-point lead into halftime. From there, the wheels fell off for the Thunder.

Westbrook managed just one point in the second half and missed all seven of his field-goal attempts to finish with 14 points in the contest. According to ESPN Stats & Info, his 0-of-7 performance in the second half was the worst half shooting in his playoff career.

As a result, the Trail Blazers’ lead eventually ballooned to 19 points in the third quarter. The Thunder cut the deficit to seven points in the fourth quarter but simply ran out of time to mount a comeback and the clock may have subsequently expired on their season, too.

While some players on the Thunder have been busy trash-talking to the opposition, the Trail Blazers, for the most part, have remained quiet and have taken a business-like approach. It shouldn’t be a surprise then to see that it’s the Trail Blazers that have a chance to close out the series at home on Tuesday.

Once the Thunder are inevitably bounced from the playoffs, there will be questions on the future of the team. While cornerstone players like Westbrook, George, Steven Adams, Schroder and Jerami Grant are all under contract for the immediate future, the organization may have to decide if a change is needed because this group may not be enough to compete in the Western Conference.

As it once looked promising that the Thunder would make a deep run in the playoffs, the team is now clinging to life to even make it out of the first round.

As a result, it may be time to start looking ahead to next season.