WBA king Pacquiao is an ‘eyesore’

“Once you stop benefiting their interest, you become an eyesore.”
--Chayan Tain 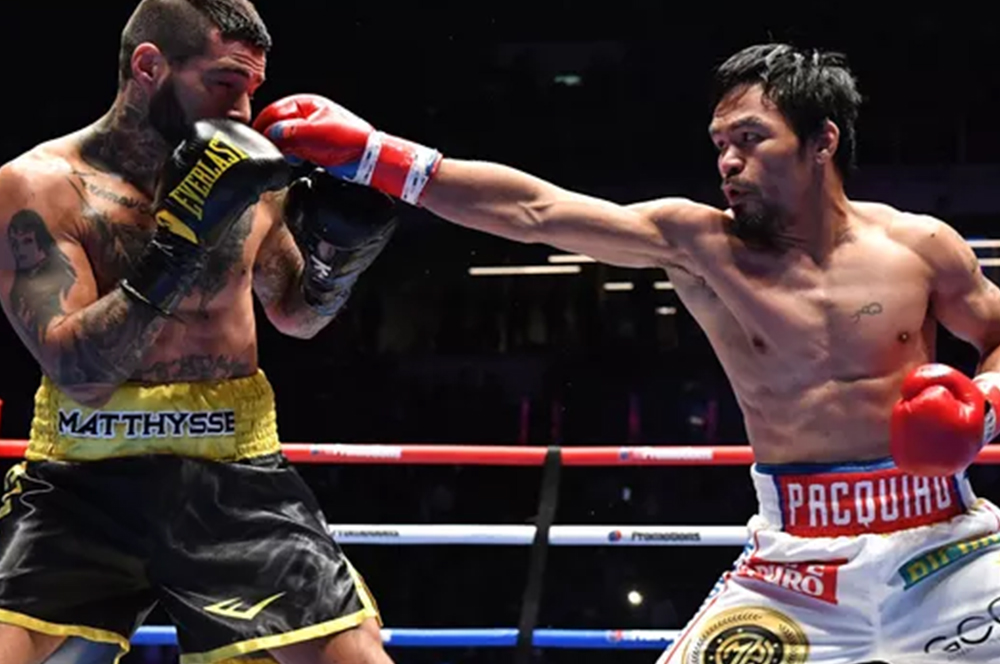 “Once you stop benefiting their interest, you become an eyesore.”
--Chayan Tain

At 39 and toting a ledger of 60 wins (39 KOs), seven losses, and two draws, Pacquiao can also be considered as the weight category’s “eyesore.”
His ascension as the WBA champion after knocking out in the 7th stanza defending titlist Lucas Matthysse (39-5, 36 KOs) on Saturday (July 15) night at the Axiata Arena in Kuala Lumpur, Malaysia, was sort of a mockery of Sweet Science although he richly deserved the accolades for becoming a world champion once more.
We won’t deny Pacquiao the splendor of his latest victory as he really was impressive in putting away the defrocked Argentine, but of the four concurrent welterweight galaxies, the hard-hitting Filipino champion miserably pales in comparison.
If paraded with his counterparts in the World Boxing Council (WBC), World Boxing Organization (WBO), and International Boxing Federation (IBF), the striking difference is easily exposed.

WBC champion Keith Thurman is 30 years old and undefeated with 28 wins and 22 knockouts; IBF champion Errol Spence Jr. is 28 years old and unbeaten with 24 wins and 21 knockouts; and WBO champion Terence Crawford also 30 years old and also unscathed with 33 wins and 24 stoppages.
Crawford took the WBO crown with a violent 9th round knockout win over Pacquiao conqueror Jeff Horn on June 6, 2018.
Any attempt for a unification would be absurd.
For bringing home the WBA belt, Pacquiao was condemned to be exposed as a carpetbagger champion.
For the first defense of his WBA diadem, Pacquiao will definitely avoid the top three contenders: No. 1 Jessie Vargas; No. 2 Jamal James; and No. 3 Jose Luis Benavidez as they are all Americans.
Pacquiao will never defend his crown in the American rings owing to his tax woes with the United States’ Internal Revenue Service (IRS) and especially now that he is estranged to Freddie Roach and former promoter Bob Arum.
If the WBA orders him to face No. 4 contender Egidijus Kavaliauskas of Lithuania, Pacquiao will most likely risk fighting a potential Jeff Horn as Kavaliauska is 30 years old and also undefeated in 20 wins and 16 knockouts.

The newly crowned Filipino senator will most likely settle for the “less dangerous” No. 5 contender Amir Khan of Great Britain, 31, and has impaired to 32 wins, four losses with 20 knockouts.
After fighting Horn in Australia and Mathysse in Malaysia, Pacquiao might fight next in London or even Lithuania.
No more glitzy MGM Grand and Mandalay Bay Arena in Las Vegas and panoramically enthralling Cowboys Stadium in Texas.
Now that Pacquiao is “his own man”, is no longer beholden to Bob Arum’s Top Rank, and is not anymore under the tutelage of Roach, he can dictate his own terms and continue to ignore calls for him to retire.
The win against Mathysee didn’t mean though he should stay in the fistic business if he cares for his safety (he is turning 40 on December 17, 2018), but it did help to boost his ego and regain his confidence to continue racking up oodles of dollars for his presidential ambition.
He may have won the battle in wrecking Mathysee, but, man, he is a lonely king in the WBA throne; he is a strange bedfellow and an “eyesore” in the welterweight kingdom.