Cardi B, justifies looting and rioting in Minnesota.
Showbiz 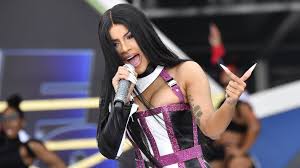 Cardi B has made a statement in regards to the protestors fighting for justice in George Floyd's murder, indicating that looting is the result of people being "tired" of fighting against police brutality. In the wake of George Floyd's death at the hands of police, tons of activists and enraged Americans have taken to the streets of not only Minneapolis, but other cities around the U.S. to riot against the violence enacted by the police on black people.

In a recent Tweet, Cardi B posted a video of looting with these words:

They looting in Minnesota and as much as I don’t like this type of violence it is what it is. Too much peaceful marches, too much trending hashtags and NO SOLUTIONS! The people are left with NO CHOICE.”

The riots and ‘protests’ are in response to the death of George Floyd at the hands of police.

Cardi B received heavy criticism for her tweet. Many ridiculed her position that protesters had ‘no choice’ but to loot from businesses utterly unrelated to the incident.

"So I just wanna give my POV," Cardi began. "Seeing people looting and going extremely outraged, it makes me feel like ‘Yes! Finally! Finally, mothaf*ckas is gonna hear us now. Yeah!’ And as much as people is so against it, at this point, I feel like I’m not against it even though it do scare me and I don’t want anybody to get hurt. But it’s just really frustrating because police brutality been going on even way before I was born, but it has been more visual ever since social media started getting poppin’. Ever since, let’s say, Instagram started, how many peaceful protests have we seen? How many trending hashtags have we seen? These hashtags keep repeating themself. I feel like I’ve done videos against police brutality—this is like my seventh time. I’ve been doing police brutality videos ever since my teeth been f*cked up and the only sh*t that changed has been my f*cking teeth."

This tweet is not the first time the rapper has come under serious heat. Recently, the rapper admitted to drugging and robbing male victims when she was younger. Many have felt the response to her crimes (or lack thereof), highlighted a double standard between men and women who commit serious crimes. AP