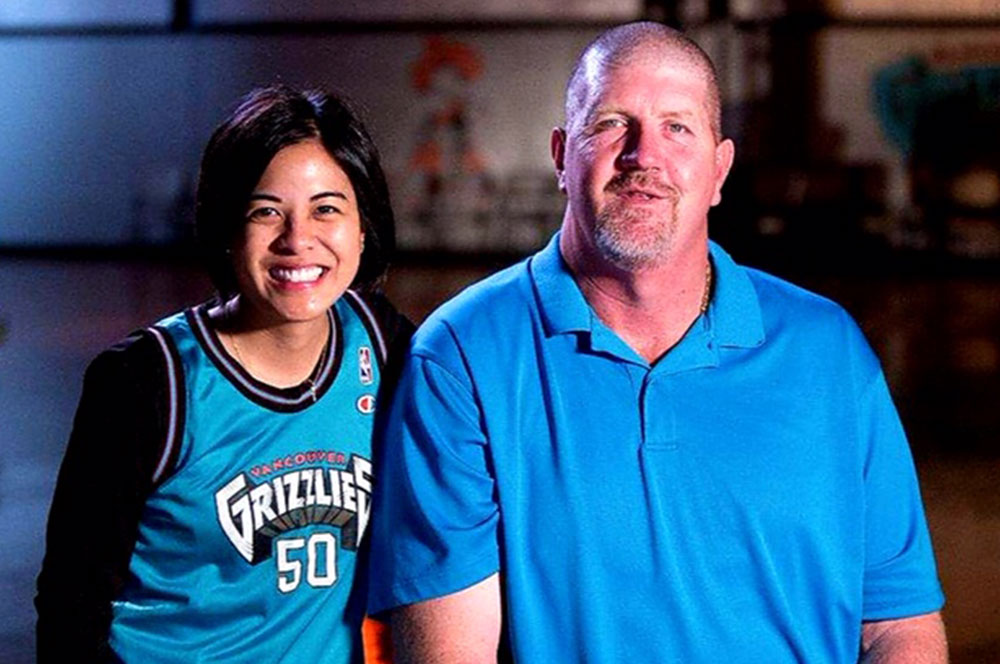 “I never paint dreams or nightmares. I paint my own reality.” Frida Kahlo

And for the award-winning young filmmaker, Kathleen “Kat” Jayme(30) it was her own fascination with basketball since she was a kid and her idolizing the basketball game of former Vancouver Grizzlies star Bryant “Big Country” Reeves that led her to write and produce her award-winning documentary “Finding Big Country.”

But even before her love of basketball her eyes and destiny were already pointed towards films. Her lolo (grandfather) on her mother side, Danilo Santiago was a filmmaker for the Premiere Productions in the Philippines. It was in her blood so to speak.

Kat was a tiny child when she started shooting hoops with her older sibling. And her brother admitted how great a basketball player Kat is.

Kat would be a regular fan watching Big Country Reeves and the Grizzlies play at the Roger’s Arena. Only a little kid then in the mid-90s, Kat would see Bryant compete against the great player Michael Jordan when the Bulls visited Vancouver.

Finding Big Country was shown in several Vancouver theatres to a sold out audience. The NBA channels featured the movie as well. Kat has made a significant stride in filmmaking. Her eyes are set on other projects now.

She also made another documentary film “Paradise Island” in 2015 about the Filipino kids who built sandcastles for money and the harsh realities of living in the world-famous beaches of Boracay, Philippines. This won Kat the Eco-Tourism Award in 2016. This film was also featured in the 2015 Cannes Film Festival.

Paradise Island is when life imitates art. Kat is an environmentalist and when she showed this film in Vancouver’s Vancity Theatre, 100 percent of the proceeds went towards Surfrider Foundation research and beach cleanups in Vancouver.

In 2011, Kat wrote and directed two award winning short fiction films, “Little Big Kid” which won a Leo Award for Best Student production in BC and “Liz” which was among 20 films selected to play in Air Canada flights.

After UBC, Kat got an internship at the National Film Board of Canada and was later offered a full time job.

If Kat is not making movies, she is also a motivational speaker and a high school basketball coach. She played point guard in the Little Flower Academy( high school team Angels).

Her next project is a daunting task—a documentary about the Vancouver Grizzlies. Remember Shareef Abdur Rahim, Mike Bibby, Byron Scott, and Greg Anthony? They all played for the Vancouver Grizzlies in the mid-90s. The team was moved to Memphis and is now known as the Memphis Grizzlies. Most likely these fomer basketball stars will be featured in this next big project of Kat.

Kat is on a roll while she is just getting warmed up. She is only 30 and it seems sky is the limit for her success in film-making. She has the education, training, experience and awards that will bring her more successes in her future.