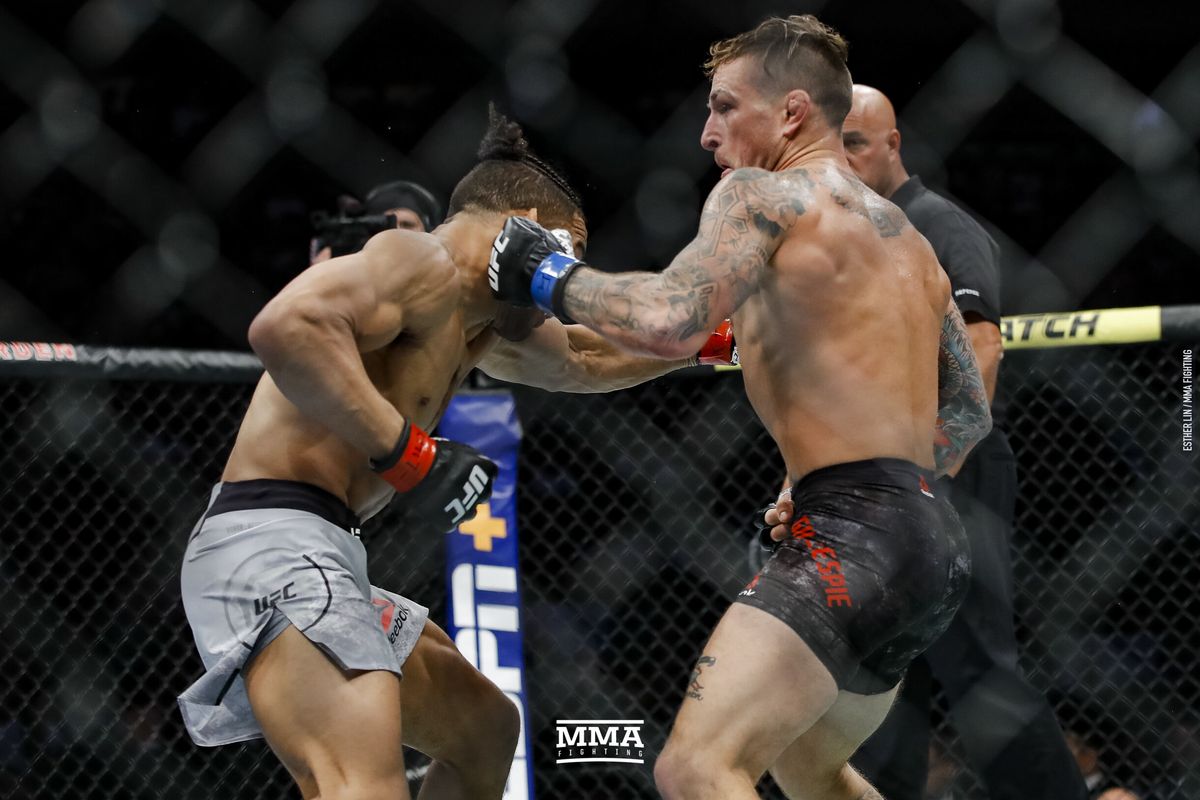 Gregor Gillespie entered UFC 244 with an undefeated record and some hype behind him. But that all changed inside two and a half minutes of action when he ate a left kick to the jaw from Kevin Lee, knocking him out cold.

Gillespie spoke to MMA Fighting recently, where he says he remains in good spirits despite the nasty end to his 13-fight win streak.

“You know how it goes. You get knocked out, I had a headache for a day or two, but I’m good now,” Gillespie said. “I’m in good spirits, you know my ego was hurt a little bit, obviously, someone who never loses and then they lose and you’ve gotta imagine that there’s gonna be some emotions about that, which there were. But my spirit is intact.”

“The Motown Phenom” was a step up in competition for Gillespie, which is something he asked for. He also knew the consequences that came with it.

“I asked for a step up in competition. Kevin Lee is a really good opponent,” he said. “A lot of people were saying, ‘He’s on a losing streak.’ Kevin Lee is not on a downward spiral and I knew that going in. Not for one second did I think I’m picking a guy going down, he’s not. You look at his last four or five fights, they’re all guys who have fought for a title or have a belt, he’s super f—ng good.

“I know that when you ask for better fights like that, your risk of losing goes up,” he continued. “That’s kind of how that goes. So that’s something I was definitely very, very aware of. That’s the risk when you’re fighting anyone, especially in the UFC, but when you take a fight against a guy who fought for a title at one point, your risk of getting beat—not just beat, but knocked out—goes up. That’s a risk I was willing to take.”

For his fight against Lee, Gillespie gave up two inches in height and seven inches in reach. Despite the size disadvantage, he isn’t willing to drop down to featherweight.

“No, that’s not something that I’m really interested in,” Gillespie said about dropping to 145 pounds. “To be completely honest with you, I don’t know what Kevin weighed the day of the fight. I can’t imagine him being much heavier than me, I was pretty heavy the day of the fight. I may not look like I’m huge for lightweight, but I carry weight well.

“I was over 170 [pounds] the night of the fight. I don’t know what Kevin Lee weighed, but he couldn’t weigh that much more than me, we weighed in the day before at the same weight.

“And again, the size had nothing to do with that. He landed a perfectly executed, perfectly timed, unbelievable kick,” he added. “People have been saying it was lucky, it was not lucky. It was not unlucky. It was an absolutely perfect kick and it was very well-executed and I give him all the props in the world.”

An NCAA Division I Wrestler and a veteran in the New Jersey regional MMA circuit, Gillespie isn’t a fighter one would call inexperienced. But after Saturday’s loss, “The Gift” was made to realize how much more work he still needs to put in.

“I can say that I have a decent amount of experience at this point, that’s probably how I would look at it,” Gillespie said. “And then on the same token, I still feel like, ‘F—k, I am kind of green.’”