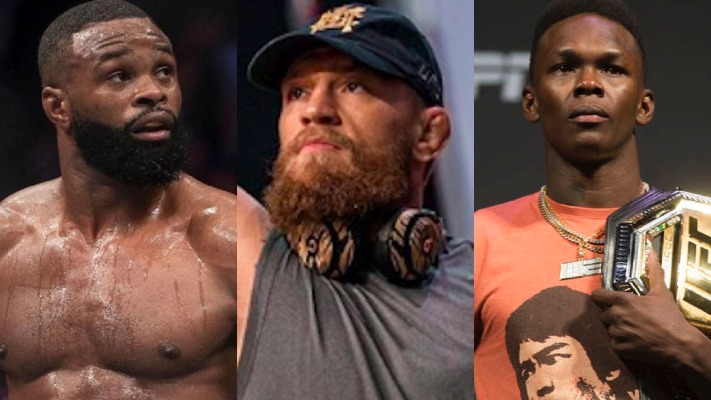 There’s no exact science to star building in combat sports. Some great, fun athletes just don’t seem to click. Some become overnight sensations. There’s lots of work that promoters, PR reps, and well placed media appearances can do to help the whole process along, but often an athlete either has ‘it’ or they don’t.

By all appearances, Israel Adesanya has it.

“To be honest, I think Israel is going to evolve into a star right underneath Conor McGregor,” Woodley said. “It’s hard to deny him. He fights crazy, he has great I.Q., he’s tough, he’s shown he can take punches, he’s with the shit. He’s gonna talk shit in the press conferences, his entrance was the best entrance we’ve ever seen in mixed martial arts—even when freaking Conor had a live music playing in the top. It superseded that in my opinion—[and] he’s getting better with time.”

That kind of star potential is also why Woodley would someday like to meet Adesanya in the cage. “For me, it’s like a respect thing. So, if I can get in front of somebody like Carlos Condit or Robbie Lawler—back in those days, that shit pumped me up.”

The longtime Roufusport fighter has recently been considering a move to middleweight, after he makes good on plans to “wipe out the division clean at welterweight.” Especially having seen the success former 170 lb fighters like Whittaker and Gastelum have had there. And for his part, Adesanya is on the smaller side of 185 lbs, having even weighed in as low as 183 for bouts against Rob Wilkinson and Kelvin Gastelum.

Still, before Woodley can make good on any future fighting plans, he has to get back into the cage. ‘The Chosen One’ hasn’t set foot in the Octagon since dropping his title to Kamaru Usman back in March. A planned bout with Robbie Lawler, for June, fell apart due to a hand injury. The 37-year-old underwent surgery in early October, with an expected 8-12 weeks of recovery to follow. And with the UFC calendar already nearly full for the year, it seems unlikely fans will see him competing again until 2020. Until that happens, any designs for a middleweight title run will just have to wait.