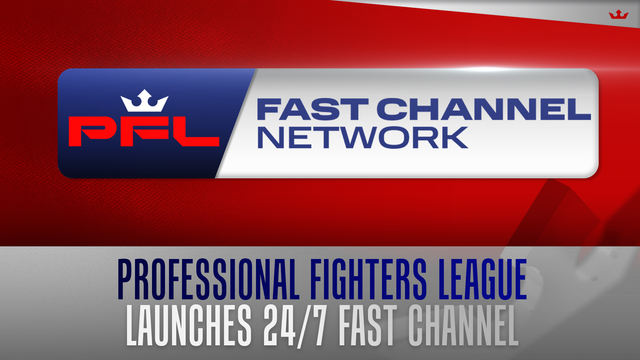 The channel is now live on Xumo and Local Now and will launch on Sports.TV and the European-based SportsTribal ahead of the PFL World Championship on Friday, November 25. Fans will now have a new way to access content featuring the greatest MMA fighters from across the globe.

All November long, the PFL FAST channel will highlight programming from past PFL Championships including the greatest title fights from the PFL library, features on previous PFL Champions, and additional dedicated content to help fans catch up on all things Championship as they prepare for MMA’s richest night.

“The PFL channel brings premier fighting action to Xumo viewers 24/7,” stated Stefan Van Engen, SVP of programming and partnerships at Xumo. “Programming such as this delivers best-in-class content to a dedicated and growing base of fans.”

“As a dedicated sports network with a strong roster of combat sport, PFL is a great fit for our service and well suited to our audience,” said Joe Nilsson, Chief Commercial Officer at SportsTribal.

The 2022 PFL World Championship takes place on Friday, November 25 at Hulu Theater at Madison Square Garden in New York City. Finalists will face off for six world titles and six $1 million champion’s purses. Superstar Kayla Harrison will look to earn her third PFL title when she takes on knockout artist Larissa Pacheco in the card’s main event, which will also feature the league’s new star signing “Hurricane” Shane Burgos in a welterweight clash against Marlon Moraes.

PFL is the first and only MMA league with a true sports-season format where elite fighters from around the world compete in a Regular Season, Playoffs and Championship. The four competitors in each division who earn the most points in the Regular Season advance to the win-or-go-home Playoffs, followed by the biggest night in MMA – the PFL World Championship – with each winner going home with the $1 million prize.

Professional Fighters League is the No. 2 MMA company globally and features an elite talent roster. PFL has live event coverage in 160 countries on leading distribution platforms and delivers a unique, innovative product to MMA fans around the world.