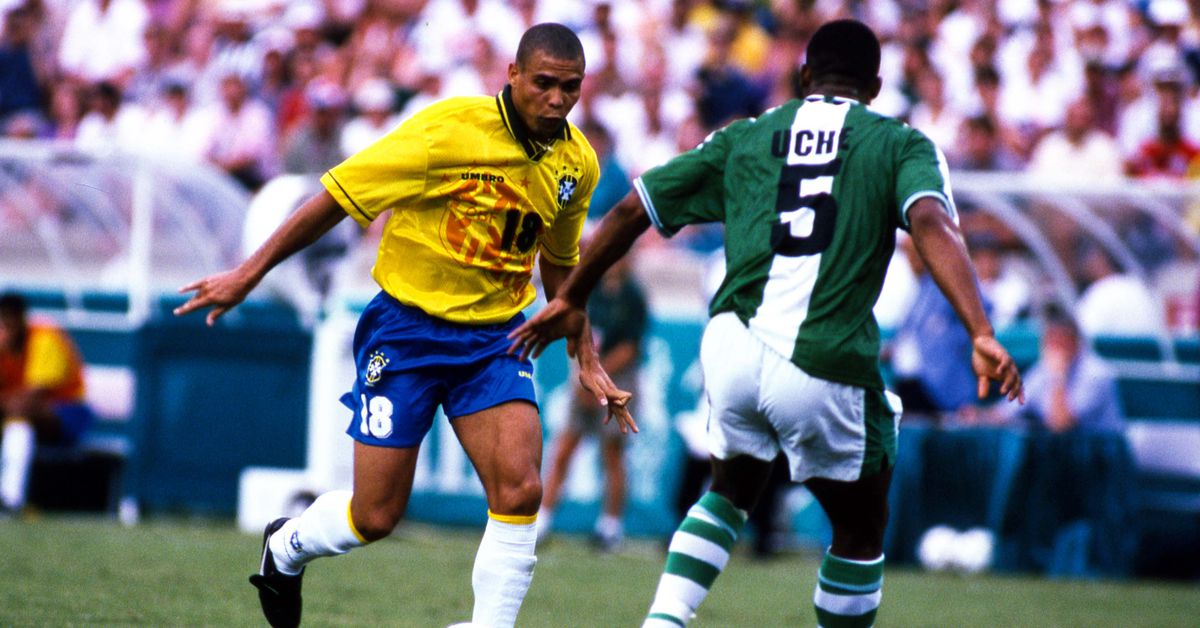 Those distinctions may have been necessary, but they feel entirely unfair and wrong. Ronaldo — the Brazilian Ronaldo — was so wonderful and imaginative, so particularly exhilarating to watch, that he deserves to be the one and only.

Back then he was Ronaldinho, and I was a young boy in a Nigerian village who walked around most days kicking a ball into one of those elastic juggling nets until the string or the net tore. For as long as I can remember, I’ve always loved football, and it was in 1996, when Brazil played Nigeria in the Olympics, that I fell in love with an individual player.I don’t recall where my family watched the game. It’s hard nowadays to watch football games in remote villages like the one that I grew up in, and back then it must have been even more difficult. Maybe we watched on a small television besieged by static and bad quality, but Nigerians always find a way to watch Nigeria play. That ‘96 Olympics team is iconic in Nigerian history, and I can’t imagine that there were many Nigerian football fans who didn’t find a way to witness their success. It’s the team that won gold in front of the world and announced Nigerian as a footballing power.

But before the Nigerians had gold and the affection of a nation draped over their necks, they played Brazil in the group stages. There was only one goal in that game, and it came from Ronaldo. As a teammate was dribbling at the top of Nigeria’s box to find space for a shot, Ronaldo, dropped out from the middle of the box to help. The teammate dribbled into him, bringing the defender along.

Ronaldo got the ball, with no space or time between him and the defender. What could he possibly do in that situation? Most would touch the ball and turn out from danger, to find a teammate or keep possession. Most would do the practical thing.

Not Ronaldo. With his first touch, as his teammate ran across him, he nutmegged the defender. The defender, wanting to save himself from embarrassment and needing to prevent a shot on goal, grabbed Ronaldo with both hands, then lifted them when he realized the referee might see him committing a foul. As he did, Ronaldo pushed him off and sent a left-footed shot to the bottom right corner of the net.

In that one moment, he decided the game.

That goal perfectly captured what was great about Ronaldo then, and throughout his tremendous career: The combination of audacity, imagination, skill and joy that is often simply termed “magic” because it is so far outside the capacity of ordinary humans. It didn’t matter if he was facing one, two, three or four defenders, Ronaldo would find a (usually very scenic) route around them.

The man we know today as Ronaldinho would late come in and play just magically, if not more so in terms of sheer imagination. But Ronaldo combined that magic with an insatiable appetite for goals in a way few players ever have. The tricks and dribbles were always in service of embarrassing goalkeepers. That he stood out as a singular and romantic figure in the great history of Brazilian players is a testament to how phenomenal he was.

There’s a moment from the game against Nigeria that has stuck with me even more than the goal. It’s the type of moment a child never forgets. Ronaldo was pressuring a defender to win possession back. The defender tried to clip the ball past him and back to the midfielder, but Ronaldo won it with his chest.

Then, in the heat of the game, with the defender right in front of him, Ronaldo started juggling the ball. Everything seemed to stand still as he did so. He had no intention to beat the defender with it; he was enjoying himself in the moment. When he finally settled the ball, the defender went in to win it and was promptly nutmegged.

I don’t know back then if I felt any guilt or shame at falling in love with the enemy. I imagine that was the furthest thing on my mind at the time. What consumed me — what I took from Ronaldo then, and until his retirement — was joy. Ronaldo was everything. He was magical and ruthless, though he still treated the game as play, as the children’s game he grew up playing with his friends.

Nigeria went on to win the tournament, beating Brazil in the semifinals. That was its own happiness, but in that group game against Brazil, I also found a player who would define football for me.