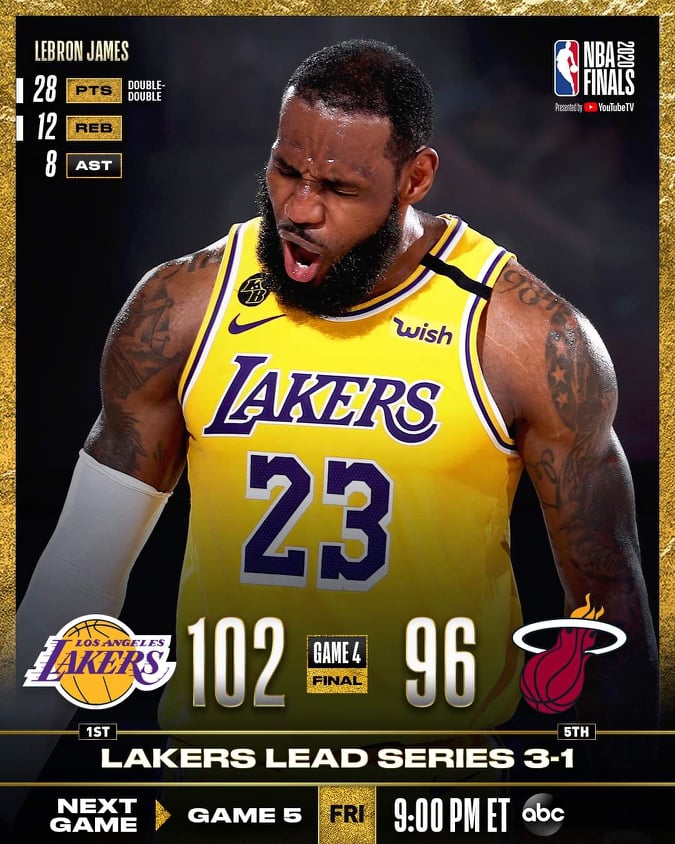 The Los Angeles Lakers seemed bound to fray when Kyle Kuzma tossed a lazy pass on the perimeter that led to a runout for Miami Heat forward Jimmy Butler.

LeBron James, who spent much of the night irate with the officials, turned his wrath toward Kuzma, one of the youngest and shakiest members of the Lakers’ rotation. On the next trip up the court, though, James worked into the paint and went straight back to Kuzma, delivering a pass that set up the backup forward for a corner three-pointer.

Kuzma’s shot was hardly the turning point in the Lakers’ ­102-96 victory in Game 4 of the NBA Finals on Tuesday night, but James’s ability to quickly refocus proved decisive during an aggravating and intense contest.

James finished with a game-high 28 points, 12 rebounds and eight assists, scoring 20 points in the second half to pull within one win of the fourth championship of his career.

“That’s the best part about it: It’s a chess match,” he said. “When you get to this point in your career, having your mind at a high level is so much more [important] than the physical. To be able to think through the game, see the adjustments and make plays before they even seem possible, that’s the best part for me personally.”

A series that seemed over after the Lakers’ two opening wins saw Miami gain confidence in Game 3 with a career night from Butler, and the return of all-star center Bam Adebayo added an additional boost Tuesday. Adebayo, who missed the previous two games with a neck strain, came charging out of the gate for the game’s first points by pushing the ball and finished with 15 points and seven rebounds. The Lakers struggled to contain his off-the-dribble attack and eventually shifted to a small lineup with Anthony Davis, who finished with 22 points and nine rebounds, at center to start the second half.

“Bam’s one of the best players in the world,” Lakers Coach Frank Vogel said before the game. “His ability to push the ball at the center position, his passing ability with all their cutting and movement is something that they have missed, and the lob threat at the rim really puts a lot of pressure on your defense. It definitely changes them.”

The relentless Heat did what it had failed to do in the series’ first two games, turning Tuesday into a grinding defensive battle. Its aggressive helping and active hands bothered Davis, and James started the game out of sync with five first-half turnovers after committing eight in Game 3.

“This was a grind-out, throwback game,” Heat Coach Erik Spoelstra said. “Look, this was in the balance, there were some moments of truth and it came down to making plays. They just made more shots to seal it.”

Miami’s ability to get to the free throw line pressed Los Angeles’s defense, and it prompted moments of fury from James, Vogel and the Lakers’ bench. During the second quarter, James screamed at referee Zach Zarba that he hadn’t touched the ball while defending a Tyler Herro shot that went out of bounds. The Lakers challenged, and the call was overturned. At the end of the third quarter, James twice exchanged words with referee John Goble, pleading for a traveling call on Butler.Some of the Lakers’ frustration was a carry-over from Game 3, when early foul trouble sidelined Davis. The Heat shot 26 free throws to the Lakers’ 21 — a disparity that narrowed down the stretch — and Butler’s physicality going to the basket presented issues, as it had in Game 3. Butler picked up where he left off Sunday, making his first five baskets to finish with a team-high 22 points, 10 rebounds and nine assists.

In a strategic shift, Davis spent much of the night defending Butler in an attempt to limit his opportunities around the basket after his 40-point outing in Game 3. Davis said he spent the entire night “locked into” the matchup, noting that the Lakers’ goal was to “make it tough” on Butler because it “was very easy for him" to “impose his will” on Game 3.

Davis, who is on the cusp of winning his first title, added that Vogel’s season-long emphasis on defense has been key to the Lakers’ postseason run.

“When I was in New Orleans, [Pelicans Coach] Alvin [Gentry] used to say it all the time, he used to preach defense,” Davis said. “I had the best offensive team. We would score 130 [points] and would never get past the second round because we didn't play defense. You hear the cliché all the time, defense wins championships.”

The Lakers have firm control of the Finals with a 3-1 lead and the opportunity to close out in Friday’s Game 5, but the margin between the teams was razor thin Tuesday. During a fourth-quarter sequence, James slammed the ball in frustration after a defensive breakdown between Davis and Alex Caruso led to a layup. As with his earlier pass to Kuzma, James quickly regained control of his composure and the game action, hitting a double-clutch layup on the next possession.

Down the stretch in Game 4, James turned to bully ball against the Heat’s smaller wings, drawing multiple fouls and hitting the glass to grab a contested rebound over Jae Crowder. All told, he hit five consecutive free throws during a key fourth-quarter push and did not leave the court during the final period.

With Miami refusing to go away, James grabbed a defensive rebound and found a rare transition opening, kicking to Kentavious Caldwell-Pope for a three-pointer in the corner. The guard was an unsung hero for the Lakers, scoring 10 first-quarter points to help make up for James’s sloppy start and Davis’s quiet one and hitting a contested driving layup with two minutes remaining to push the Lakers’ lead to seven.

“That’s one of my specialties,” said Caldwell-Pope, who finished with 15 points, his best scoring performance of the Finals. “I’m always running corner to corner. If LeBron or [Davis] grabs the rebound, I’m running to the corner and I’m ready to shoot.”

Davis delivered the dagger by hitting an open three-pointer in the final minute, reprising the late-game hero role he played in hitting a buzzer-beating three-pointer against the Denver Nuggets in the Western Conference finals. The all-star forward slapped his chest in celebration as James stomped on the court and screamed again.

This time, James was yelling in jubilation, not indignation.