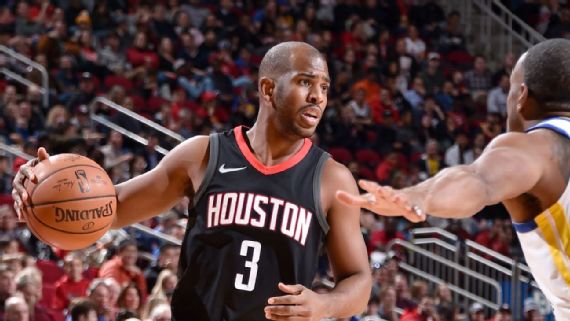 CHICAGO -- The Houston Rockets extended an NBA record on Monday night, making 10 or more 3-pointers for the 35th consecutive game.

The Rockets, who finished 20-for-54 from beyond the arc in their 116-107 victory over the Chicago Bulls, also own the second-longest streak in league history -- they knocked down 10 or more 3-pointers in 27 straight games last season. Both stretches have come under Rockets head coach Mike D'Antoni, who employs a high-paced offense that loves to push the pace.

"It means we take a lot of 3s, I do know that," D'Antoni said with a smile when asked about the streak.

D'Antoni and his players acknowledged the streak wasn't that big of a deal to them.

"Not really," the veteran coach said. "We're trying to take the right shot, the right play. We will go on a fast break and jack up a 3. We will do that, but if guys feel comfortable and are confident, why not? I kind of like us doing that."

The Rockets had 10 first-half 3-pointers, their 13th game this season with 10 treys before halftime, according to ESPN Stats & Information research. Entering play Monday, there were three teams with fewer than 13 games with 10 3-pointers in an entire game this season: the Minnesota Timberwolves (11), Milwaukee Bucks (10) and New York Knicks (8).

"I ain't never seen nothing like it," Chris Paul said of the Rockets' streak of 35 consecutive games with at least 10 3-pointers made. "I'm just now getting into sort of that mode." Bill Baptist/Getty ImagesAll-Star point guard Chris Paul is enjoying his new surroundings in D'Antoni's offense.

"I ain't never seen nothing like it," Paul said of all the 3-pointers. "I'm just now getting into sort of that mode. It's fun because I get to get on guys about not taking shots, and I'm the guy that passes a lot of times. Trevor [Ariza] passed up a shot in the first half and I about went nuts on him. And Coach is like that with all of us. He says that first good shot that you get, take it. And he's cool with the play."

The Bulls' Twitter account seemed to know what was coming during Monday's game, tweeting in the first half:

"The team is really built for that and so that's what we do," D'Antoni said. "With James [Harden] in there ... we could even get more up because he's so good at kicking out and getting to the rim. What we try to do philosophy-wise is [take] layups and 3s and fouls shots. We're missing James, who gets all the foul shots, and we're missing that burst to the basket -- we got a little bit with Chris and Eric [Gordon], but James will do that and he opens up a lot of 3s, so we take whatever they give us -- and if it's 20 3s so be it, but we'll try to read the best we can."

Like his coach, Paul didn't seem surprised or impressed by the new mark.