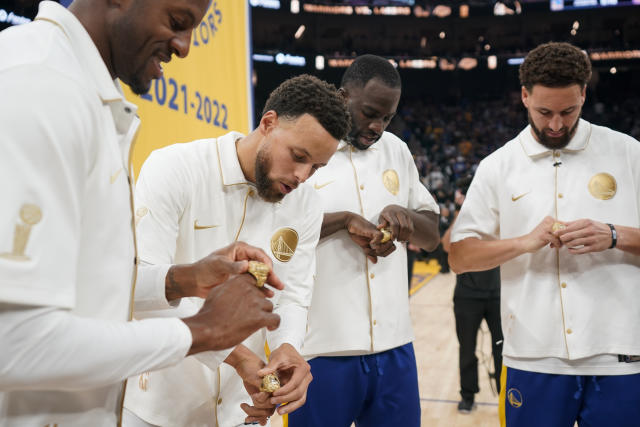 Stephen Curry is grateful for the women in his life. He celebrates them every chance he gets.

Whether they want that treatment or not.

This is the story of Nanea McGuigan. Only the most ardent NBA fans likely know who she is, but millions saw her on their televisions three weeks ago when the Golden State Warriors handed out championship rings to players.

McGuigan unexpectedly got hers, too, that night after Curry and the Warriors decided to pull off a surprise and show her — and the world — how revered she is.

“It’s about understanding the value that women bring into this male-dominated league,” Curry said in an interview with The Associated Press. “She was one of the first people I met when I got drafted. She made me feel right at home, my family feel right at home. She was a great ambassador for what the transition was going to be like. Now 14 years later, we felt it was right to honor her with the ring with everybody watching.”Curry and his wife Ayesha have three young children, two of them girls. The girls aren’t currently interested in being like their dad. He’s hoping they want to be like McGuigan, whose official title is Director of Basketball Administration and Player Programs. Translated, it means she runs a whole lot of stuff for the Warriors, their players and their families.“I know my daughters are watching and they’re starting to get curious now: ‘What’s her role? What does she do?’” Curry said. “Neither one of my girls wants to play basketball. But they can still have an opportunity in the business of sports. It’s amazing that’s being celebrated and encouraged more across the league.”

Not all the national NBA news involving women has been positive lately.

Robert Sarver. Ime Udoka. Joshua Primo all have stories that aren’t going anywhere anytime soon. Sarver hasn’t sold the Phoenix Suns and Phoenix Mercury yet. Udoka’s future — whether the Brooklyn Nets will hire him or not — will likely be decided soon. Primo’s problems may just be starting. Those stories involving women merit attention and should remain in the news, though they have been overshadowed by the ongoing Kyrie Irving saga.

But highlighting women’s roles isn’t a new or one-time stance for Curry. He’s been an advocate for women within the game for a while, particularly this year as the 50th anniversary of Title IX was being marked.A pair of one-of-a-kind, hand-painted shoes he wore during the NBA Finals against Boston back in June bore the words “Retire Inequality,” and they were designed by a team that included UConn women’s guard Azzi Fudd — who represents Curry’s SC30 brand through a name, image and likeness deal. The message on the shoes was in reference to, among other things, the gender pay gap.

He didn’t only wear them for warm-ups or just long enough to get it on Instagram. He wore them to play. In the NBA Finals. With the world watching.

Fudd and UConn open their season on Thursday night. With Paige Bueckers out for the year with an ACL tear, UConn’s hopes might rest on Fudd. She’s a 3-point shooter. It’s not a coincidence that she and Curry — the most prolific 3-point shooter of all-time — were drawn to one another.“I look at not just my daughters, but all the women in my life that have had such a major influence on who I am, their different personalities, the talents, value, morals and values that they instilled in me,” Curry said. “We have an opportunity to leverage the game into a great opportunity for young girls and women to pursue positions where they can make a difference, like changing communities, changing industries, it all matters.

“I learned as much about how to be a human being, how to protect my own, hard work, discipline and all that from my mom and both of my grandmas.”

His approach is also a tribute to his aunt, India Adams. She runs a Montessori school and played basketball at Belmont Abbey, a four-time all-conference player there. She knows the game. And after every Warriors game, Curry gets a text.

“Look forward to it every game,” Curry said. “She’s as invested in what I do now as ever.”The Warriors aren’t good right now. They’re struggling, winless on the road and looking nothing like the team that won the NBA title five months ago.

There’s time to get it right. Same goes for a lot of teams off to slow starts. It has not been a banner three weeks for many in this league, Milwaukee and Utah and Giannis Antetokounmpo and Luka Doncic among the few exceptions. Some teams will figure it out and turn things around.