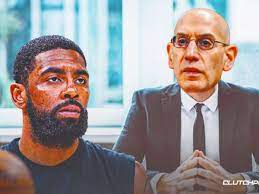 The Nets banned Irving for at least five games without pay on Thursday after he refused to say he had no antisemitic beliefs.

That came hours after Silver said Irving made a “reckless decision” to post on his Twitter feed a link to a film that contains antisemitic material and said he would be meeting with him within a week.

They finally did on Tuesday, the person told The Associated Press, speaking on anonymity because the meeting and its details were private.

Irving eventually deleted the tweet and issued an apology on Instagram, after failing to do so when he met with reporters earlier Thursday.

But by then, Silver said he was disappointed that it had taken so long for Irving to apologize, and that he hadn’t denounced the material in “Hebrews to Negroes: Wake Up Black America.”
Even after meeting with Silver, Irving has work to do to repair his relationship with the Nets. They were already angry enough by his refusal to get vaccinated against COVID-19, leaving him ineligible to play in home games most of last season, that they refused to give him a contract extension over the summer. This time, he will have to complete measures they said would be necessary before he could return to play.Irving will miss his fourth game Wednesday against the New York Knicks, and the Nets begin a four-game road trip on the West Coast after that.