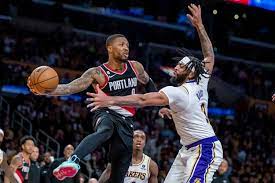 Patrick Beverley, James and Russell Westbrook all missed shots for LA down the stretch, and Anfernee Simons hit a leaning layup over Anthony Davis with 36 seconds left to trim Portland’s deficit to 102-101. Lillard then drilled his sixth 3-pointer, but James drove straight through the paint for an uncontested tying dunk with 7.7 seconds to play.

Grant, who finished with 16 points, then drove and scored the tiebreaking bucket. James had a decent look at the basket on the final play, but couldn’t connect.James had 31 points, eight rebounds and eight assists, while Davis finished with 22 points, 10 rebounds and six blocked shots for the Lakers (0-3).

NEW ORLEANS (AP) — Lauri Markkanen capped a 31-point performance with clutch free throws late in overtime, Kelly Olynyk hit a go-ahead, driving scoop with 3 seconds to go in the extra period, and overhauled Utah beat New Orleans to remain unbeaten through three games under new coach Will Hardy.Utah had to regroup after losing a 17-point lead in the fourth quarter and trailing 110-107 when CJ McCollum hit a 3-pointer in the final minute of regulation. But Jordan Clarkson hit a tying 3 to force overtime and Utah had the benefit of not having to play against Brandon Ingram or Zion Williamson in overtime.

Ingram left the Pelicans’ home opener in the second quarter with concussion symptoms after a collision with teammate Naji Marshall. Williamson scored 25 points in his first regular-season game in New Orleans since May 4, 2021. But the star power forward also hit the floor hard on his lower back when Clarkson blocked his transition dunk attempt from behind in the fourth quarter.

McCollum finished with 28 points, but his off-balance, 27-foot attempt from the right wing at the end of overtime bounced off the rim.